The Florida primary was held last Tuesday (Aug 28, 2018), and the field of Republicans and Democrats have been whittled down to one per party.

The number of votes cast, and the delegates selected give us a glimpse as to what to expect November 6th, not just here in the Sunshine State, but around the country.

The candidates now include:

Comment: This will be a contest between an out-going GOP Governor who reduced unemployment and created jobs, versus a career politician (22 years in the House (11 terms), 18 years in the Senate (3 terms))who followed party lines. Because of his tenure and voting record, Nelson is vulnerable.

Comment: Bilirakis is the incumbent, serving since 2007, and is a strong advocate for veterans. He faces a serious challenge in Hunter, a former federal prosecutor and FBI agent.

Comment: Former Governor and Republican Crist is the incumbent and ran unopposed as a Democrat. Newcomer Buck has an up-hill battle on his hands.

Comment: This will be the most visible race in the state and will set the tone for all others. Rep. DeSantis is pro-Trump (having been endorsed by the President), versus anti-Trump candidate Gillum. Gillum surprised a lot of people by defeating Gwen Graham in the primary. His experience primarily includes serving as Mayor of Tallahassee. He is a Progressive and endorsed by Sen. Bernie Sanders.

Comment: Caldwell pulled off a bit of a surprise by defeating Denise Grimsley and Baxter Troutman. Caldwell is endorsed by Sen. Marco Rubio and the NRA. He is also an avid Constitutional Conservative. Fried is from Miami, an attorney, and helped expand access to medical marijuana. She claims, “Our politics and our government is broken.”

And from around the Pinellas County area, we have:

Comment: Murphy is a former member of the Florida House. She will be running against Hooper, a career politician who has generated a lot more campaign funds than his opponent.

Comment: Harrington, a school teacher, will be running against incumbent Grant.

Comment: Heeren is another former teacher looking to support his community. He will face DiCeglia who is a business owner and GOP county head. Hard to read this one; could be a coin-toss.

Comment: Douglas is a newcomer and another school teacher vying against incumbent Latvala. She may be without the financial resources to adequately fight.

Comment: Blacklidge is a local attorney and businessman, as well as life-long Republican. Webb is active in her community.

NOTE: This list does not include candidates for County Commissioners, School Board, or Fire Commission.

Although the election day data has not yet been posted, showing votes by counties and party, the final numbers are in in terms of Votes-by-Mail (absentee) and early voting. The data shown here is most illuminating. 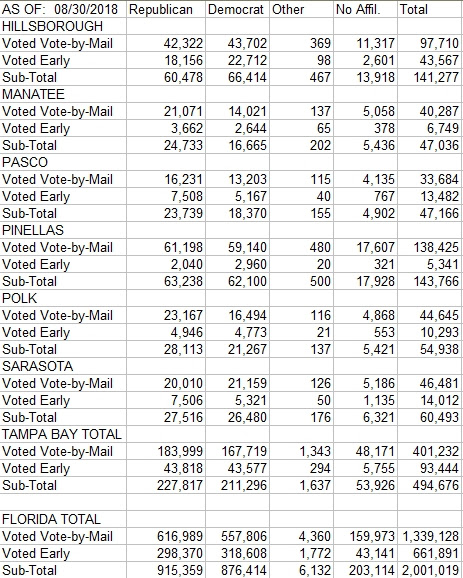 Here we clearly see Republicans like to vote by absentee ballot (write-in), and Democrats prefer early-voting in person.

According to the Florida Department of State, Board of Elections, the number of registered Florida voters eligible to vote in the Primary included:

This means Democrats had the advantage going into the primary election, but allowed Republicans to cast more votes. This implies Democrats still do not like to vote in mid-term elections.

Over 2 million people voted in Florida prior to election day, an admirable number, but it pales in comparison to the 2016 presidential year figures which is typical.

In other words, from a percentage perspective, Republicans were more active than 2016, and the Democrats did not keep pace. However, notice the “OTHRS” figure, representing independents; as this was a primary, the percentage is down; again, this is to be expected as the primary is a race for the parties. The Independents though are the real prize as that number will go up for the November 6th election.

SO WHAT CAN WE EXPECT GOING INTO THE NOVEMBER ELECTION?

It appears the Republicans are cognizant of what is at stake in this election and are not taking anything for granted. If they lose, and the Congress falls into the hands of the Democrats, they fear their president will face impeachment. They are also deeply satisfied with the economic changes in the country since Mr. Trump entered the White House. As such, Florida Republicans are unified and determined. They are rallying around their President and are showing up in force to vote. At the state level, they fear a liberal agenda will force higher taxes and threaten the second amendment.

If you read the campaign pages of the Democrats, you’ll notice a common theme: “Florida is broken,” and, “We need to put the interests of the people above those of special interests.” The question is, will Independents buy it? The Democrats’ problem is they have yet to devise a compelling argument to vote for them, other than to resist President Trump. They also offer the enticement of more freebies, particularly college education, but the taxpayers know they will get stuck with the bill. In other words, the Democrats are stuck in a rut. And please, forget the mantra of Socialism; it will simply not fly down here where people have worked hard all their lives to retire.

What we are about to witness here in Florida, as well as elsewhere across the country, is an ugly brawl pitting the pro-Trump forces against the anti-Trumpers. The real fight is over the votes of the Independents. If they believe the country is better economically and in need of tougher laws on immigration, they will side with the GOP. If not, they will go with the Democrats.

Frankly, I see a “Red Tide” coming to Florida in November, certainly not blue. I would like to believe the other states will follow suit, but I will only comment on Florida herein.

VIDEO: There Are Terrorists in Our Midst
Scroll to top