One of the more elementary observations about economics is that a nation’s prosperity is determined in part by the quantity and quality of labor and capital. These “factors of production” are combined to generate national income.

I frequently grouse that punitive tax policies discourage capital. There’s less incentive to invest, after all, if the government imposes extra layers of tax on income that is saved and invested.

Bad tax laws also discourage labor. High marginal tax rates penalize people for being productive, and this can be especially counterproductive for entrepreneurship and innovation.

Still, we shouldn’t overlook how government discourages low-income people from being productively employed. But the problem is more on the spending side of the fiscal equation.

The Welfare State’s Effect on the Poor

During the 20 years before the War on Poverty was funded, the portion of the nation living in poverty had dropped to 14.7% from 32.1%. Since 1966, the first year with a significant increase in antipoverty spending, the poverty rate reported by the Census Bureau has been virtually unchanged…Transfers targeted to low-income families increased in real dollars from an average of $3,070 per person in 1965 to $34,093 in 2016…Transfers now constitute 84.2% of the disposable income of the poorest quintile of American households and 57.8% of the disposable income of lower-middle-income households. These payments also make up 27.5% of America’s total disposable income.

This massive expansion of redistribution has negatively impacted incentives to work:

The stated goal of the War on Poverty is not just to raise living standards but also to make America’s poor more self-sufficient and to bring them into the mainstream of the economy. In that effort the war has been an abject failure, increasing dependency and largely severing the bottom fifth of earners from the rewards and responsibilities of work…The expanding availability of antipoverty transfers has devastated the work effort of poor and lower-middle income families. By 1975 the lowest-earning fifth of families had 24.8% more families with a prime-work age head and no one working than did their middle-income peers. By 2015 this differential had risen to 37.1%…The War on Poverty has increased dependency and failed in its primary effort to bring poor people into the mainstream of America’s economy and communal life. Government programs replaced deprivation with idleness, stifling human flourishing. It happened just as President Franklin Roosevelt said it would: “The lessons of history,” he said in 1935, “show conclusively that continued dependency upon relief induces a spiritual and moral disintegration fundamentally destructive to the national fiber.”

In another WSJ column on the same topic, Peter Cove reached a similar conclusion:

America doesn’t have a worker shortage; it has a work shortage. The unemployment rate is at a 15-year low, but only 55% of Americans adults 18 to 64 have full-time jobs. Nearly 95 million people have removed themselves entirely from the job market. According to demographer Nicholas Eberstadt, the labor-force participation rate for men 25 to 54 is lower now than it was at the end of the Great Depression. The welfare state is largely to blame… insisting on work in exchange for social benefits would succeed in reducing dependency. We have the data: Within 10 years of the 1996 reform, the number of Americans in the Temporary Assistance for Needy Families program fell 60%. But no reform is permanent. Under President Obama, federal poverty programs ballooned.

Edward Glaeser produced a similar indictment in an article for City Journal:

In 1967, 95 percent of “prime-age” men between the ages of 25 and 54 worked. During the Great Recession, though, the share of jobless prime-age males rose above 20 percent. Even today, long after the recession officially ended, more than 15 percent of such men aren’t working… The rise of joblessness—especially among men—is the great American domestic crisis of the twenty-first century. It is a crisis of spirit more than of resources… Proposed solutions that focus solely on providing material benefits are a false path. Well-meaning social policies—from longer unemployment insurance to more generous disability diagnoses to higher minimum wages—have only worsened the problem; the futility of joblessness won’t be solved with a welfare check… various programs make joblessness more bearable, at least materially; they also reduce the incentives to find work… The past decade or so has seen a resurgent progressive focus on inequality—and little concern among progressives about the downsides of discouraging work… The decision to prioritize equality over employment is particularly puzzling, given that social scientists have repeatedly found that unemployment is the greater evil.

Why work, though, when the government pays you not to work?

And that unfortunate cost-benefit analysis is being driven by ever-greater levels of dependency.

…our current welfare system fails to prepare people to take care of themselves, makes poor people more financially fragile, and creates incentives to remain on welfare forever… The first failure of government welfare programs is to favor help with current consumption while placing almost no emphasis on job training or anything else that might allow today’s poor people to become self-sufficient in the future… It is the classic story of giving a man a fish or teaching him how to fish. Government welfare programs hand out lots of fish but never seem to teach people how to fish for themselves. The problem is not a lack of job training programs, but rather the fact that the job training programs fail to help people… The third flaw in the government welfare system is the way that benefits phase out as a recipient’s income increases… a poor family trying to escape poverty pays an effective marginal tax rate that is considerably higher than a middle class family and higher than or roughly equal to the marginal tax rate of a family in the top one percent.

I like that he also addressed problems such as implicit marginal tax rates and the failure of job-training programs.

Professor Lee Ohanian of the Hoover Institution reinforces the point that the welfare state provides lots of money in ways that stifle personal initiative:

Inequality is not an issue that policy should address… Society, however, should care about creating economic opportunities for the lowest earners… a family of four at the poverty level has about $22,300 per year of pre-tax income. Consumption for that same family of four on average, however, is about $44,000 per year, which means that their consumption level is about twice as high as their income… We’re certainly providing many more resources to low-earning families today. But on the other hand, we have policies in place that either limit economic opportunities for low earners or distort the incentives for those earners to achieve prosperity.

I’ve been citing lots of articles, which might be tedious, so let’s take a break with a video about the welfare state from the American Enterprise Institute.

And if you like videos, here’s my favorite video about the adverse effects of the welfare state.

Even (Some) Leftists Acknowledge the Problem

By the way, it isn’t just libertarians and conservatives who recognize the problem.

…today’s social safety net discourages poor people from working, or at least from earning more money… you might qualify for some welfare programs, such as food stamps, housing vouchers, child-care subsidies and Medicaid. But if you get a promotion, or longer hours, or a second job, or otherwise start making more, these benefits will start to evaporate—and sometimes quite abruptly. You can think about this loss of benefits as a kind of extra tax on low-income people… Americans at or just above the poverty line typically face marginal tax rates of 34 percent. That is, for every additional dollar they earn, they keep only 66 cents… One in 10 families with earnings close to the poverty line faces a marginal tax rate of at least 65 percent, the CBO found… You don’t need to be a hardcore conservative to see how this system might make working longer hours, or getting a better job, less attractive than it might otherwise be.

To understand what this means, the Illinois Policy Institute calculated how poor people in the state are trapped in dependency:

The potential sum of welfare benefits can reach $47,894 annually for single-parent households and $41,237 for two-parent households. Welfare benefits will be available to some households earning as much as $74,880 annually… A single mom has the most resources available to her family when she works full time at a wage of $8.25 to $12 an hour. Disturbingly, taking a pay increase to $18 an hour can leave her with about one-third fewer total resources (net income and government benefits). In order to make work “pay” again, she would need an hourly wage of $38 to mitigate the impact of lost benefits and higher taxes.

Agreeing that there’s a problem does not imply agreement about a solution.

Folks on the left think the solution to high implicit tax rates (i.e., the dependency trap) is to make benefits more widely available. In other words, don’t reduce handouts as income increases.

The other alternative is to make benefits less generous, which will simultaneously reduce implicit tax rates and encourage more work.

I’m sympathetic to the latter approach, but my view is that welfare programs should be designed and financed by state and local governments. We’re far more likely to see innovation as policymakers in different areas experiment with the best ways of preventing serious deprivation while also encouraging self-sufficiency.

Let’s close with a political observation. A columnist for the New York Times is frustrated that many low-income voters are supporting Republicans because they see how their neighbors are being harmed by dependency:

Parts of the country that depend on the safety-net programs supported by Democrats are increasingly voting for Republicans who favor shredding that net… The people in these communities who are voting Republican in larger proportions are those who are a notch or two up the economic ladder—the sheriff’s deputy, the teacher, the highway worker, the motel clerk, the gas station owner and the coal miner. And their growing allegiance to the Republicans is, in part, a reaction against what they perceive, among those below them on the economic ladder, as a growing dependency on the safety net, the most visible manifestation of downward mobility in their declining towns… I’ve heard variations on this theme all over the country: people railing against the guy across the street who is collecting disability payments but is well enough to go fishing, the families using their food assistance to indulge in steaks.

It’s not my role to pontificate about politics, so I won’t address that part of the column. But I will say that I’ve also found that hostility to welfare is strongest among those who have first-hand knowledge of how dependency hurts people.

P.S. If you want evidence for why Washington should get out of the business of income redistribution, check out this visual depiction of the welfare state: 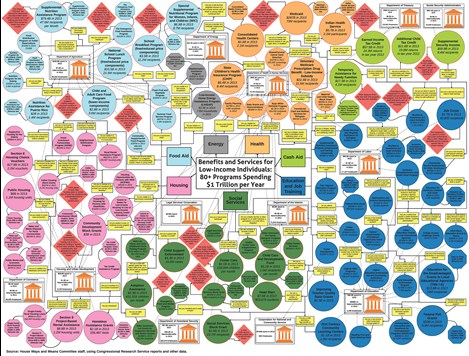 P.S. The Canadians can teach us some good lessons about welfare reform.

P.P.P.S. Last but not least, there’s a Laffer-type relationship between welfare spending and poverty.

EDITORS NOTE: This column with videos and images is republished with permission.