Classical liberalism is the key that unlocked modern prosperity.

I periodically ask my left-leaning friends to identify a nation that became rich with statist policies.

They usually point to Sweden or Denmark, but I point out that Sweden and Denmark became rich in the 1800s and early 1900s when government was very small.

At that point, they don’t really have any other response.

That’s because, as I pointed out in this clip from a recent debate at Pomona College in California, there is no example of a poor nation becoming rich with big-government policies (though we have tragic examples of rich nations becoming poor with statism).

So if statism isn’t the right approach to achieve prosperity, how can poor nations become rich nations?

I’ve offered my recipe for growth and prosperity, but let’s look at the wise words of Professor Deirdre McCloskey in The New York Times:

The Great Enrichment began in 17th-century Holland. By the 18th century, it had moved to England, Scotland and the American colonies, and now it has spread to much of the rest of the world. Economists and historians agree on its startling magnitude: By 2010, the average daily income in a wide range of countries, including Japan, the United States, Botswana and Brazil, had soared 1,000 to 3,000 percent over the levels of 1800. People moved from tents and mud huts to split-levels and city condominiums, from waterborne diseases to 80-year life spans, from ignorance to literacy. …50 years ago, four billion out of five billion people lived in…miserable conditions. In 1800, it was 95 percent of one billion.

Deirdre then explains that classical liberalism produced this economic miracle:

What…caused this Great Enrichment? Not exploitation of the poor, …but a mere idea, which the philosopher and economist Adam Smith called “the liberal plan of equality, liberty and justice.” In a word, it was liberalism, in the free-market European sense. Give masses of ordinary people equality before the law and equality of social dignity, and leave them alone, and it turns out that they become extraordinarily creative and energetic. …we eventually need capital and institutions to embody the ideas, such as a marble building with central heating and cooling to house the Supreme Court. But the intermediate and dependent causes like capital and institutions have not been the root cause. The root cause of enrichment was and is the liberal idea, spawning the university, the railway, the high-rise, the internet and, most important, our liberties.

In other words, the right ideas are the building blocks that enable the accumulation of capital and the development of institutions.

Deirdre’s analysis is critical. She reminds us that investment doesn’t merely depend on good tax policy, and rule of law doesn’t magically materialize. You need a form of societal capital as the foundation.

Anyhow, to show how good ideas changed the world, this chart shows how classical liberalism is the key that unlocked modern prosperity: 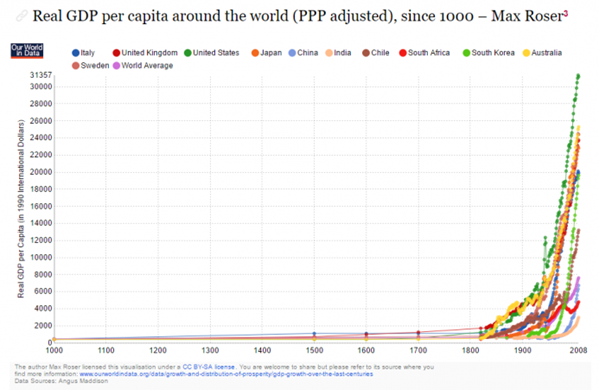 You may have already seen a chart that looks just like this. It was in a video Deirdre narrated.

Don Boudreaux shared a similar chart in one of his videos.

Circling back to the point I made at the start of this column, socialism (or any other form of statism) has never produced this type of economic miracle.

EDITORS NOTE: This column with images and video is republished with permission.