If the Austin, Texas, ordinance requiring Christian churches to hire homosexual and transgender pastors is not brought down, it’s just a matter of time before that requirement comes to your town.

Along with such requirements will be the collapse of First Amendment protections altogether in America, Texas Pastor Council President Dave Welch warned Thursday.

In comments to the Christian Action Network, Welch said that the difficult decisions that member churches made to stand and fight in Austin is a decision all churches need to make nationally.

“In the past, we have too often waited and watched from the sidelines, silent,” Welch said. “We decided that that is not possible anymore, that’s not acceptable.”

Welch added that waiting and watching puts churches, ministries and God’s people generally at the disadvantage of having to fight back on an issue after it’s largely too late. 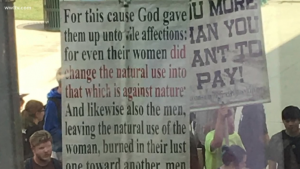 The rights of churches and ministries to stand on the Word of God against perverted sexual disorientations and false claims such as transgender sex changes is at stake in Austin, Texas. (WWL-TV photo)

“Forcing churches to violate core convictions is not acceptable,” he added. “Once government does so, all of our Constitutional protections are essentially gone – all gone, for all of us, across all America.”

The way the ordinance makes the issue a matter of forced hiring of homosexual and other LGBTQ person is by adding those identity groups to rules against discrimination, but not adding exemptions for religious beliefs.

This occurred several years ago in Houston.

Many church pastors and leaders began to talk to each other in the Houston area, and the conversation grew across Texas, leading to several major priorities.

One was to ensure that government does not consider itself to have a basis for demanding anything over churches, to rule over them in any area of belief, principle – doctrines to teach and live by.

Churches in the Houston area rose up against the ordinance there, winning a court ruling for a city-wide referendum. The people of Houston handed their liberal city council a major rebuke by voting the ordinance down.

WE WANT TO TURN THE PENDULUM BACK TO CONSTITUTIONAL PROTECTIONS

Other cities have put similar non-discrimination ordinances in place – adding LGBTQ designations or “sexual orientation” to the protections regarding race, national origin, sex and age. There have been marginally adequate exemptions in place elsewhere, according to Welch.

“These things are seldom sure until they are interpreted,” he said.

Welch said Texas cities such as Dallas and San Antonio are examples of cities with marginally better religious based exemptions. Austin’s city council put its new ordinance restrictions in place without such exemptions for churches or ministries.

The U.S. Pastor Council, that Welch’s state chapter is part of, is the named filer, or plaintiff, in state and federal lawsuits to change or abolish the city’s ordinance.

According to court clerical offices, there have been no filed responses to those civil cases.

Welch said that his side recognizes the need for patience in the legal process, adding, “as we all know, nothing happens fast in the court system.”

The ultimate hope is to protect the freedoms of churches and ministries to reach out, build up, worship, teach and preach, comfort the broken and call on God with open and unrestricted liberty.

“Our major premise is to put an end to this threat against our churches,” Welch said. “The pendulum has swung too far against our freedoms, so we want to turn the pendulum back to Constitutional protections. Those protections should remain.”

EDITORS NOTE: This column with images is republished with permission. The featured photo is by Steve Johnson on Unsplash.