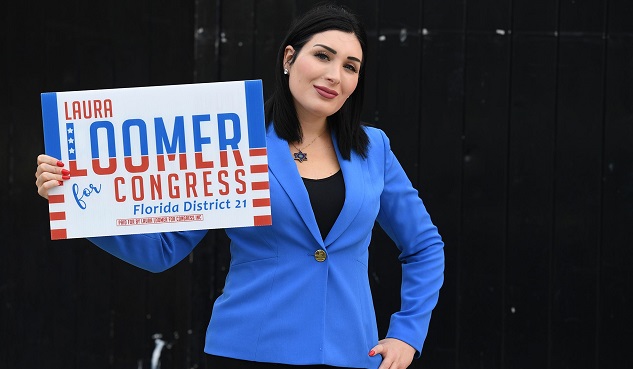 In an email to supporters Laura Loomer wrote:

I want you to be the first to know that I have filed to run for US Congress again in Florida’s 21st Congressional District, home to President Donald Trump, for the 2022 election cycle.  In doing so, I am once again putting the Big-Tech Tyrants, the radical left, and members of the elite DC Political establishment-Swamp on notice.

I am sending you this message from CPAC in Orlando, Florida where I just watched President Trump give his first speech since leaving office.  At CPAC this year, the theme is ironically “America Uncanceled”.  I am deeply honored by the outpouring of support I received from all of you during my last campaign, and I humbly request your continued support during my 2022 campaign so I can continue to fight for you and America.

Americans are aware that for years, I have been patient zero in Big-Tech’s plot to silence and censor conservative voices and interfere in our elections.  Candidates have come to depend on social media to efficiently and effectively get their messages to voters, fundraise, advertise, and participate in public discourse. As the most banned woman in the world and the first de-platformed candidate in US history, I know firsthand of the dangers this poses to personal liberty, our constitutional right to free speech, free and fair elections, and the concept of sovereign nations.

Americans are now just learning about how dangerous Big Tech’s unchecked power has become after these Silicon Valley companies coordinated to de-platform Donald J. Trump, while he was still a sitting US President, from social media, the internet, and even the banking systems.  Will you help?

We need leaders in Congress like myself who actually understand this vital issue of Big-Tech censorship and the way it impacts the lives of Americans and the integrity of our elections.  Donate today to help me launch my 2022 campaign and break up the Big-Tech monopolies.

If Big Tech is permitted to collude for the sake of blocking conservatives and their chosen candidates from participating in and discussing political issues in the digital public square, then they must face criminal charges for their outright election interference which violates the bedrock of our democracy, both here in America and world-wide.  The only way a candidate has a chance to win when this occurs, is with overwhelming financial donations (small and large) and on-the-ground grassroots support from patriotic, generous, and devoted supporters and donors like yourself from all over the country.  Can I count on your HELP? Without Social Media and equal access to payment processors, my campaign has been forced to use alternatives and sometimes more costly mechanisms to communicate our vital America First platform with voters.

Despite being challenged by the economic impacts of COVID-19, my incredible supporters and donors, which includes YOU, helped my campaign raise much appreciated donations to mount an aggressive campaign with limited face-to-face ability that won a crowded primary with six candidates, and had an impressive finish in the general election against entrenched, radical Democrat incumbent Lois Frankel.

This amazing effort was only possible because of generous supporters like yourself, and endorsements from President Trump, Judge Jeanine Pirro, Rep. Matt Gaetz, Rep. Paul Gosar, Roger Stone, General Flynn, “Bo Snerdley”, and more!  People never would have imagined that Big-Tech’s efforts, which have gone unchecked by Congress for years, would accelerate to target elected officials, including the President of the United States, arguably the most powerful person in the world!

I am without question the leading expert on this issue and I need your help to get to Congress to fight against Big-Tech censorship, voter fraud, and the many other issues important to Americans and small business owners who have experienced unimaginable challenges and losses over the last year as we have witnessed unconstitutional mandates and lock downs that threaten our God given rights and Constitutional freedoms.  Big-Tech censorship and election interference is hands-down the most important issue facing America, because if we are silenced, and the Big-Tech tyrants get to choose election winners and losers via censorship, then we will never again have a free and fair election in America! This is one of the main reasons why I have immediately filed to run for Congress again and need your support.  Help my campaign reach our first fundraising goal of $100,000 by donating here today!

We need your help to break fundraising records beyond that goal to send a message to Big-Tech that we won’t tolerate their cancel culture and election interference anymore!  Be a part of making history and help us shatter our goal by clicking here.xssd42Kji_CZpw=s0-d-e1-ft#https://mcusercontent.com/49aaeb063c431085ef7f1d81a/images/b8936b91-c598-4bbc-9ee8-4ecce9a649ff.jpg” alt=”” width=”200″ align=”left” />