A new report reveals the best and worst states for economic and personal freedom.

I wrote a couple of days ago about America’s best and worst cities for pro-market policy, and I noted that there are several rankings of economic liberty for states and nations.

But what if you want to know the place with the most overall freedom? In other words, what is the most libertarian place to live based on both economic liberty and personal liberty?

If you don’t mind a bit of travel, the answer is New Zealand.

For those who prefer to stay in the United States, Will Ruger and Jason Sorens periodically crunch numbers to calculate Freedom in the 50 States.

Their previous edition had New Hampshire in first place, so let’s take a look at the newest version:

This 2018 edition of Freedom in the 50 States presents a completely revised and updated ranking of the American states on the basis of how their policies promote freedom in the fiscal, regulatory, and personal realms. …More than 230 policy variables and their sources are now available to the public on a new website for the study. …the 2018 edition provides annual data on economic and personal freedom and their components back to 2000. …Freedom in the 50 States is an essential desk reference for anyone interested in state policy and in advancing a better understanding of a free society.

The publication is loaded with data, as you’ll see from the following charts.

To put all this data in context, the report separately calculates fiscal freedom, regulatory freedom, and personal freedom.

We’ll start with the fiscal section, which includes variables about taxes and spending, as well as other measures such as debt and government employment.

For those interested, the report has plenty of analysis and explanation about the variables that are used and the weights that are assigned. 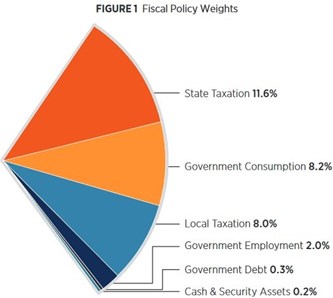 Most of us, though, simply want to see which states get good scores and which ones get bad scores. 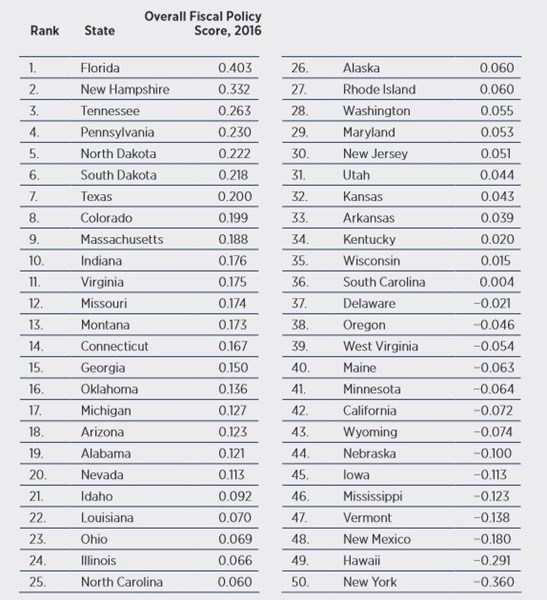 I assume nobody is surprised to see New York in last place.

Now let’s shift to regulatory policy and see where the burden of red is most onerous.

This part of the ranking covers a range of issues, most notably controls on land use and restrictions on the use of markets in health care. 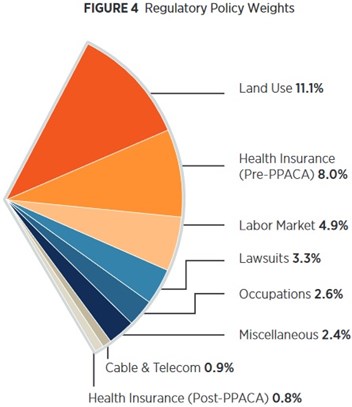 But there are other important variables, including the extent and burden of occupational licensing.

Indeed, before getting to the overall rankings for regulation, I want to share those scores because it is so galling and upsetting that politicians impose barriers that limit the freedom of people to earn income.

Colorado deserves hearty applause for being at the top, edging out Idaho by a narrow margin. And even though Vermont was near the bottom of the fiscal rankings, it merits a mention for being good on the issue of occupational licensing. 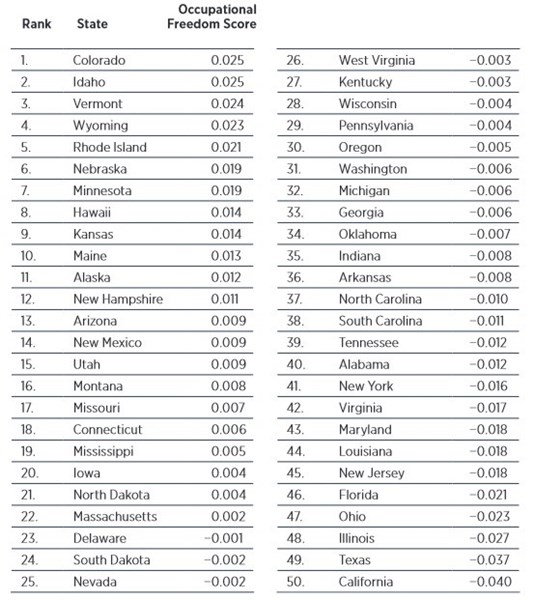 California deserves hearty condemnation for being in last place. And I’m not surprised to see states like Illinois and New Jersey near the bottom.

I’m very disappointed, however, that Texas and Florida have such a dismal record.

But let’s not fixate on just one of the variables. If we look at the rankings for all regulatory issues, Kansas is in first place, followed by Nebraska and Idaho. 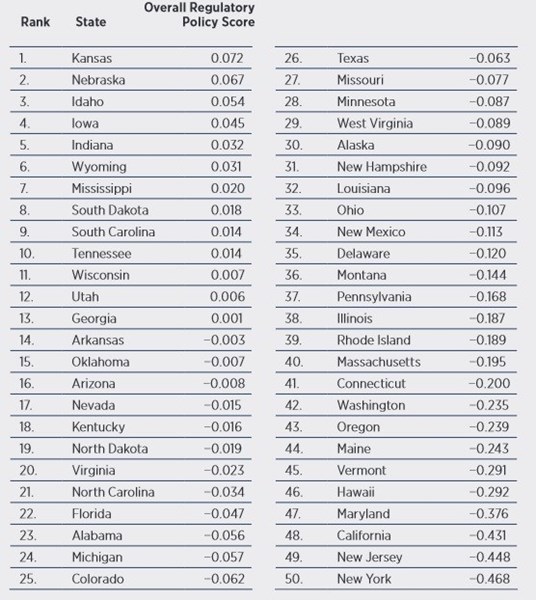 The worst states (hardly a surprise) are New York, New Jersey, and California.

Florida is in first place by a comfortable margin, followed by three other zero-income tax states (though the absence of a state income tax does not guarantee a good score, as you can see from the poor performance of Alaska, Wyoming, and Washington). 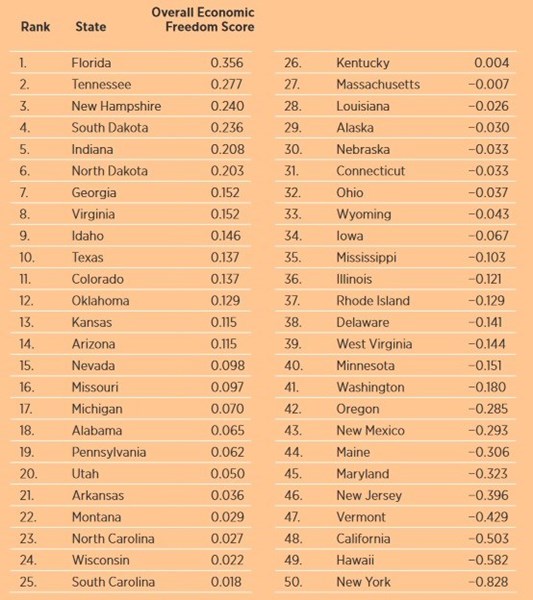 New York wins the Booby Prize by a large margin.

Hawaii and California also stand out in a bad way.

The above table tells us which state enjoys the most economic liberty, but that doesn’t tell us where to live if you want the maximum amount of overall freedom.

To identify the nation’s most libertarian state, we also need to look at rankings for personal liberty. 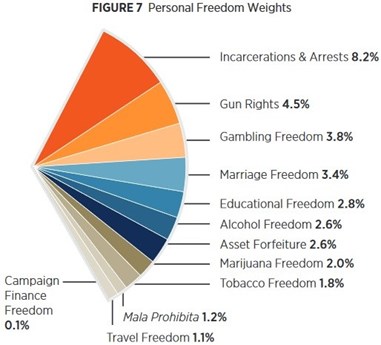 This means, in part, whether people are harassed and persecuted for victimless crimes, but it also includes measures of educational freedom and gun rights.

Speaking of which, I can’t resist sharing the data on which states most respect the 2nd Amendment.

Kansas gets the best score, followed by Vermont(!), Arizona, Idaho, and Mississippi. 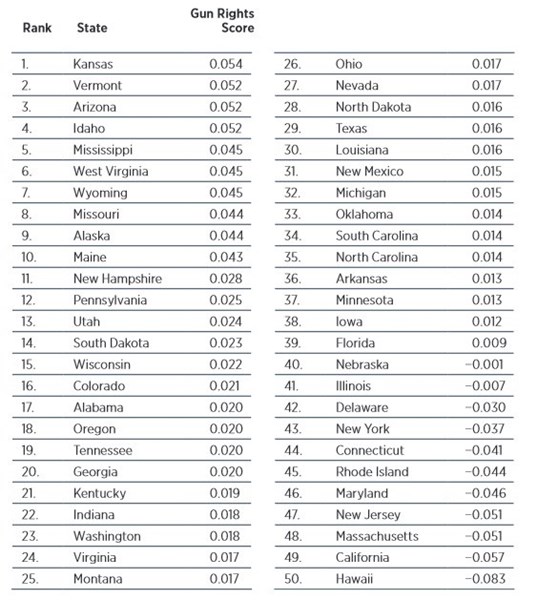 Hawaii is the worst state by a significant margin and we (again) find California near the bottom.

Another issue that is near and dear to my heart is asset forfeiture.

I am nauseated and disgusted that governments are allowed to steal property from people who have not been convicted of any wrongdoing.

So let’s applaud New Mexico, Nebraska, and New Hampshire for putting limits on this awful practice. 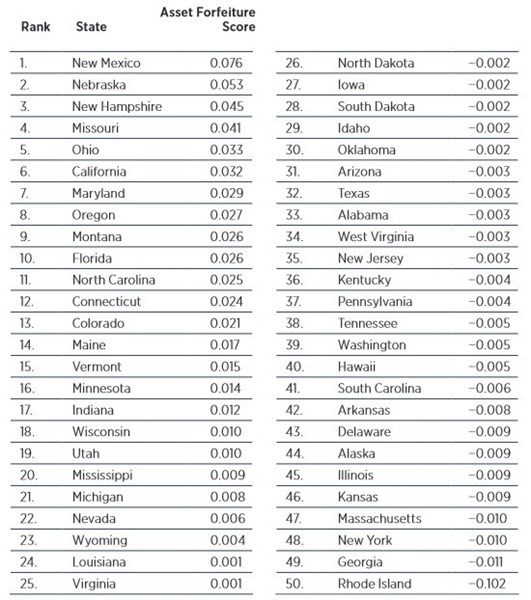 And let’s heap unending scorn on Rhode Island for having the nation’s worst track record on this issue.

But what happens when we combine all issues relating to personal freedom?

Well, that’s exactly what the authors did, which means we get a comprehensive ranking for personal freedom. I’m not surprised that Nevada, Colorado, and New Hampshire are in the top 5, but I’m surprised to see that Maine leads the pack. 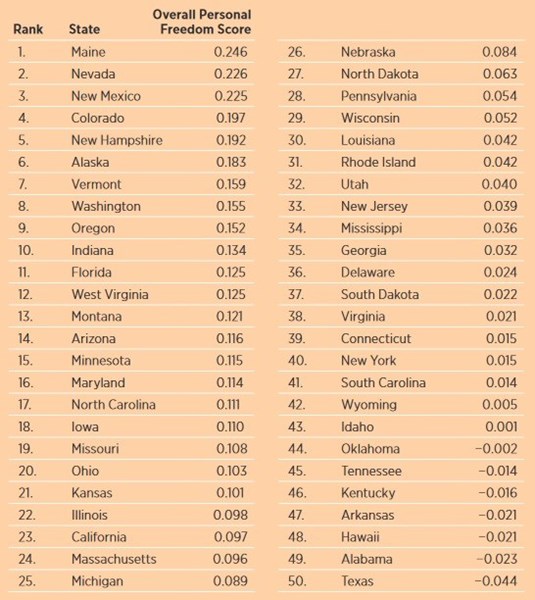 Likewise, I guess I’m not too surprised that Texas and other Bible Belt states are socially conservative.

But Hawaii next to last?!?

In any event, the report combines economic freedom and personal freedom and tells us which state could be considered the most libertarian.

And the winner is the Sunshine State of Florida, followed by New Hampshire, Indiana, Colorado, and Nevada. I’m surprised that Florida does so well, though some of the other high-scoring states make sense (especially when I look at data on who reads these columns). 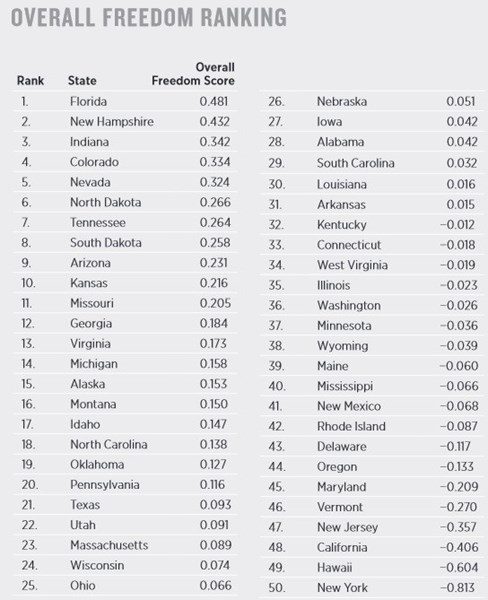 By contrast, the most dirigiste state is New York. That doesn’t surprise me, and I’m also not shocked by some of the other bottom dwellers.

I’m tempted to end here since we’ve already surveyed so much information.

But there’s one final chart that hopefully should be very fascinating.

We just looked at the data on how states currently rank for overall liberty.

This final selection tells us which ones have been moving in the right direction and wrong direction since the turn of the century.

Kudos to Oklahoma for adopting a lot of good reform. Same for New Mexico. And it’s also interesting to see that several states from the Great Lakes region boosted their scores (with Illinois being a laggard, of course). 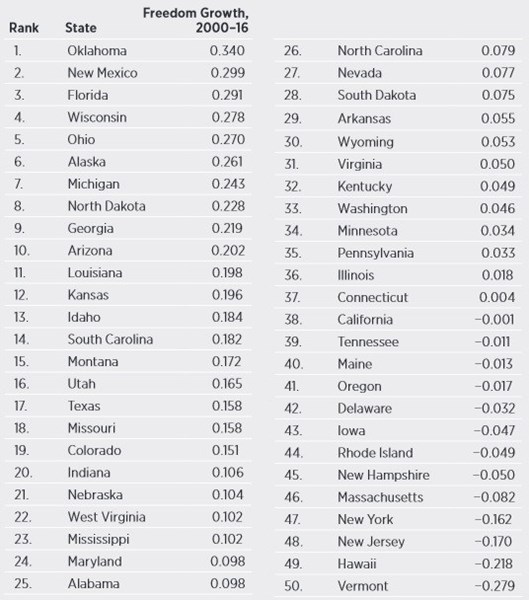 Vermont has the dismal distinction of having moved the fastest in the wrong direction (no wonder it’s the Moocher State).

Hawaii also deserves an unfavorable mention, while the deterioration of New Jersey and New York is hardly a surprise.