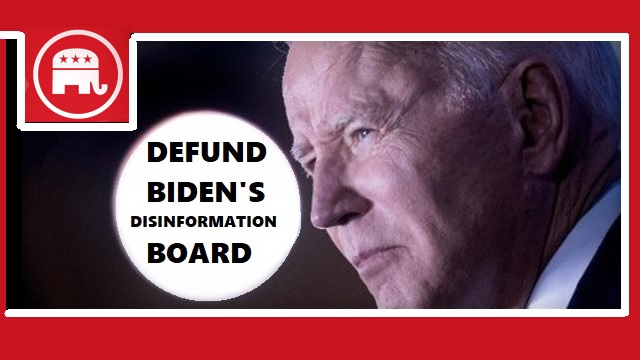 Republican Louisiana Rep. Mike Johnson will introduce legislation Tuesday that would defund the Department of Homeland Security’s new “Disinformation Governance Board,” which is set to be led by Nina Jankowicz.

The Daily Caller first obtained the legislation spearheaded by Johnson, which has 50 cosponsors. The bill would completely bar federal funding for the DHS’ “Disinformation Governance Board,” something Johnson said the Republicans will do if President Joe Biden does not get rid of the board.

“The Biden Administration’s decision to stand up a ‘Ministry of Truth,’ is dystopian in design, almost certainly unconstitutional, and clearly doomed from the start,” Johnson told the Daily Caller before introducing the legislation. “The government has no role whatsoever in determining what constitutes truth or acceptable speech. President Biden should dissolve this board immediately and entirely. If he won’t then Republicans will.”

Jankowicz attempted to discredit the Hunter Biden laptop story in the past and is now in charge of the DHS disinformation board. Republican Sen. Ron Johnson sent a letter April 27 to DHS Secretary Alejandro Mayorkas, saying Jankowicz is a “beacon of misinformation online” and mentioned that she has published multiple tweets “furthering the false media narrative” about the Hunter Biden laptop.

Both The Washington Post and The New York Times noted the authenticity of Hunter Biden’s laptop in March 2022, more than a year after the Daily Caller News Foundation (DCNF) first verified it on Oct. 29, 2020. The DCNF obtained a full copy of Hunter Biden’s alleged laptop from former New York Mayor Rudy Giuliani in 2020 and had the emails forensically verified as real.

Just days before the DCNF verified the authenticity of the laptop, Jankowicz tweeted about the laptop, saying it “is a Russian influence op.”

During the second presidential debate, Jankowicz sent out a tweet which said that Biden cited “50 former natsec officials and 5 former CIA heads that believe the laptop is a Russian influence op.”

In a tweet from December 2017, Jankowicz also claimed the Steele dossier, which has been totally discredited, was funded by Republicans. Christopher Steele, the dossier’s author, was never funded by Republicans. The Washington Post reported in October 2017 that Marc E. Elias, a lawyer for the Clinton campaign and DNC, and his law firm, Perkins Coie, hired Fusion GPS last April to investigate Donald Trump — something Jankowicz failed to mention.

Jankowicz is currently a fellow at the Wilson Center. On her website, she calls herself an “internationally-recognized expert on disinformation and democratization.”

Biden’s New Truth Czar Talks A Lot About ‘Disinformation Laundering.’ And Here She Is Committing That Very Sin