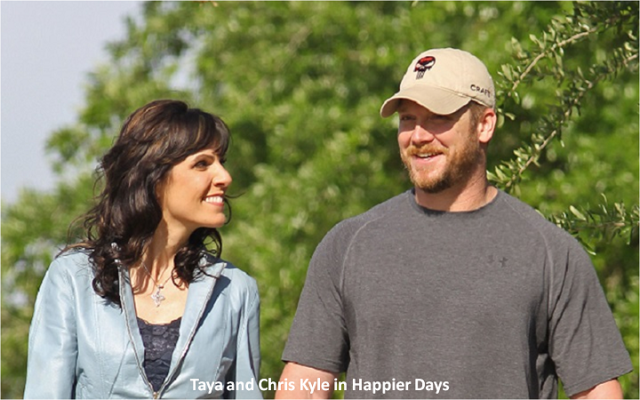 A friend of the court brief supporting Taya Kyle, the widow of Chris Kyle, the American Sniper, was filed yesterday afternoon in the U. S. Court of Appeals for the Eighth Circuit by the Thomas More Law Center (TMLC), a national public interest law firm based in Ann Arbor, Michigan.  In the highly controversial case, a Minnesota jury awarded former Minnesota governor Jesse Ventura $1.8 million in damages in July 2014.  The verdict included $500,000 in damages for defamation and over $1.3 million dollars in “unjust enrichment” from the proceeds of Chris Kyle’s book, American Sniper.

“This is TMLC’s way of saying thank you to Taya. The Law Center, and especially our senior trial counsel Erin Mersino and her husband, Paul, worked together on the brief, not only to honor Chris Kyle’s heroic sacrifices in service to our nation, but also to honor Taya for the many hardships she had to endure while her husband was deployed defending our Nation. Too often we forget to thank the families of our deployed troops for the hardships and emotional strain they silently endure while their loved ones are deployed in harm’s way.”

The unusual case spawns from a brief passage in the book American Sniper, authored by Chris Kyle where he discusses a confrontation with Jesse Ventura in a California bar where the two men were attending a fellow Navy SEAL’s wake.  The book describes how a man (Ventura) was being loud and disrespectful at the wake, and made anti-American comments insulting the Navy SEALs, stating “You deserve to lose a few.”  Although Ventura is never mentioned by name in the book, Ventura sued Chris Kyle for defamation.  Chris Kyle was tragically murdered before the case was tried, but instead of dropping the lawsuit, Ventura went after Chris Kyle’s widow, Taya.  The Court replaced Taya Kyle as the Defendant in the case as the representative of Chris Kyle’s estate.

Although Chris Kyle could not testify in person on his own behalf due to his tragic death, when Ventura’s lawsuit went to a jury trial last year, his lawyers presented several witnesses who supported the truth of Chris Kyle’s words. The case is now on appeal in the U.S. Court of Appeals for the Eight Circuit.

The Thomas More Law Center filed a motion to be allowed to file the friend of the court brief with the Eighth Circuit Court of Appeals on March 11, 2015.  Taya Kyle’s attorneys consented to the filing, while attorneys for Ventura refused to consent. Yesterday afternoon (March 17th), the Eight Circuit Court granted the motion.

While TMLC believes that the entire decision of the lower court should be reversed, its brief specifically focuses on why the $1.3 million dollar award for “unjust enrichment” must be reversed.  The brief describes why the lower court erred by allowing unjust enrichment damages in a defamation lawsuit, and that there have been no other cases in the history of our nation that have allowed such damages for a defamation claim.  Further, the brief states that “the damages award for unjust enrichment amount to an impermissible windfall for Ventura that, if permitted to stand, could create precedent that creates a chilling effect on free speech by expanding defamation damages.”

Chris Kyle is a true American hero. TMLC is proud to support Taya Kyle and to honor the memory of Chris Kyle. He is considered the most lethal sniper in U.S. military history with 160 confirmed kills.  He bravely served four tours in the Middle East, protecting our country as a Navy SEAL.  Chris Kyle left behind his wife, Taya, and their two children. Chris Kyle’s book American Sniper was adapted into the popular film released this past December and directed by Clint Eastwood. The film, which has obtained box office success, makes no mention of the confrontation with Ventura.

TMLC’s brief was written by the husband and wife team of Erin Mersino, Senior Trial Counsel at the Thomas More Law Center, and Paul Mersino, an attorney and Shareholder at the law firm of Butzel Long, P.C. in Detroit, Michigan, who worked pro bono on the brief.

Click here to read a full copy of the brief