In the midst of the swirl of events following the Jihad massacre in San Bernardino, a “Summit for 20 Western Muslim Voices for Reform against the Islamic State and Islamism,” was organized in Washington, D.C. At the conclusion a news conference was held at the National Press Club. The press conference capped a two day conference the purpose of which was to publish Declaration of Muslim Reform principles. At the rostrum was an international contingent of reformers from Canada, the U.S., Europe and Pakistan. Dr. M. Zuhdi Jasser of the American Forum for Islam and Democracy was the organizer and moderator of the event. A list of the organizations  and participants can be found here. The principles of  the reform declaration,  as published in a Gatestone Institute article, co-authored by  Dr. Jasser and Raheel  Raza are:

Watch this You Tube video of the Muslim Reform Summit press conference: Following the conclusion of the National Press Club event, two women from the group headed  over to Massachusetts Avenue, the location  of the Saudi financed and controlled Washington Islamic Center. They nailed a signed copy of the Muslim reform declaration to its door. That was modeled on the 95 Theses that Martin Luther nailed to the door of the All Saints Church on October 31, 1517 that purportedly sparked  the Protestant reformation. However, within seconds a caretaker came out and tore it off the Center’s door.

The daunting problem that the Muslim reformers face is that normative Islam believes that there is no need for reform since any distortion of the uncreated words of Allah, would be deemed idolatrous. However, given the declarations by  Egyptian President  El-Sisi  in a meeting with leading  Sunni clerics at  Al Azhar University in Cairo on New Year’s 2015, at least one Muslim country leader believes that  Islam is in dire need of reform. He says that is required to combat the apocalyptic pure Islamic terrorism  espoused by the self-declared Caliphate  of the Islamic State.

One of the women who participated in the Washington Islamic Center  event  was former Wall Street Journalist and author of Standing Alone: An American Woman’s Struggle for the Soul of Islam, Asra Nomani.  Normani was a colleague of the late Dan Pearl in Pakistan.  She saw him off in October 2002, never to return, kidnapped and slaughtered by 9/11 Al Qaeda mastermind Khalid Sheik Mohammed (KSM).  She was also involved in the 2011 investigations that led to KSM being identified as Pearl’s  killer. Nomani is U.S. born, the daughter of Indian Muslims from Mumbai who settled in Huntington, West Virginia. She is a graduate of both the University of West Virginia and American University.

Nomani  is in league with  other Muslim  and former Muslim women  like Raheel Raza,  Ayaan Hirsi Ali, Irshad Manji and other like minded reformers who believe the effort to reform should be started.  Nonetheless, she is doubtlessly viewed as an apostate, heterodox in the standards of normative Sunni Islam. Having said that she is a fearless defender of personal freedoms for Muslim women reflected in her proposed Muslim women bill of rights. Further she recognizes the problems that both she and the others at the Reform Summit  see as persisting in Political Islam. Sharia that follows of way of Allah demanding devotion to Jihad against unbelievers.

This morning Nomani was paired off against Dalia Mogahed, a former Gallup pollster on Islam ,now director of research for the Institute for Social Policy and Understanding. Mogahed is what the Obama White House considers as an exemplary American Muslim woman, resplendent in her Hijab.

Back in  July 2010, we wrote  about Mogahed’s  appointment by President Obama to the White House Advisory Council on Faith Based  and Neighborhood Partnerships. She is coauthor of the book and film Who Speaks for Islam?: What a Billion Muslims Really Think. She worked  Dr. John L. Esposito, a Georgetown University colleague at the Prince Alaweed bin Talal Center for Muslim Christian Understanding.   At the Jasser contended in a report by The Investigative Project  that Ms. Mogahed’s outreach to radical Muslim groups did not help. 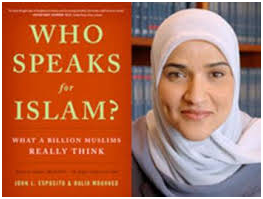 The damage is immeasurable to Muslims seeking non-radical alternatives. They are going to say, why bother? The government has chosen sides in the conflict.

Note this exchange among Rich Lowry of the National Review, Dalia Mogahed and Asra Nomani from today’s  NBC Meet the Press transcript:

Well, it seems to me that this debate, whether Islam is a religion of peace or not, really, it’s irrelevant for outsiders. It’s for Muslims to decide whether it’s a religion of peace or not. And if enough of them do, then you cut off the oxygen to the radicals. But at the moment, the extremists have significant financial popular and theological backing in the Middle East. And that is an enduring phenomenon. And it’s one that is going to require a long, ideological war to win.

I’m sorry, I’m going to have to disagree with you. They simply do not have ideological, theological, or popular support. And this is a criminal organization that is funding their criminality with things like drug trade and selling oil. They do not have the ideological support that you’re describing at all. In fact, it’s quite the opposite. They’ve had a number of voices from across the spectrum say that what they’re doing is completely un-Islamic. They have no support popularly, in terms of the general public. So–

But yet they’re still there.

But so are many other terrorist organizations. And their primary victims are Muslims. I think that’s very important.

And to that point, I think what speaks loudest and what speaks to your point is the blood that’s spilling from Australia, to now California. I mean, how much blood has to be spilled until we recognize inside of a Muslim community that we do have an ideological problem? And that we do have support? I mean, there are–

Excuse me. There are hundreds and hundreds of followers of Islamic State around Europe and the U.S. The Saudis are showing this. And all you have to do is look at the conversation inside of our mosques and inside of our communities. And you will hear it. And I hear it. And I have to say that I saw it in 2002, went to Islamabad, Pakistan, and met women who were supporting this ideology. I call them the Taliban Ladies Auxiliary back then. This young woman in California would’ve been a star member of it.