Snopes.com, a fact-checking website with a mission to uphold the Current Truth by demolishing unauthorized deviations from the Party line (while leaving the Party-approved deviations undisturbed), has stepped in it when it began to disprove the People’s Cube satirical fiction.

Their first few debunkings of our political fantasies were thorough and neutral in nature, which made them quite amusing. They started with our story about how Rosie O’Donnell tattooed the black flag of ISIS on her butt to protest American imperialism. Snopes’s professional journalistic investigation into this subject matter made a fascinating read. A few more similar debunkings of our political parodies followed, which one might call “over-debunking.” Naturally, we responded with more spoofs about how the Snopes.com CEO was arrested on charges of fraud and corruption, and how Snopes denied visiting the White House during the White House visit.

For one reason or another, these Snopes spoofs remained undebunked. Instead, Snopes changed its tone. It still continued to debunk our satires, but it stopped providing the link to the source or even referring to our site by name. Finally it stopped mentioning the fact that the debunked stories were, indeed, political satires. We call that under-debunking.

Thus, the latest Snopes debunking made us feel thoroughly under-debunked. At best it was unprofessional; at worst it was slanderous and knowingly misleading. See the screenshot above and our satire here.

In a language that Snopes editors can understand, their hurtful microagression against us caused us to retreat to our designated safe space, where we still remain, tallying the following grievances:

Snopes Verifies Snopes is a Hoax

Urban legends website Snopes.com determines its own existence is fabricated

The site once considered the authority on Internet hoaxes and urban legends issued an ironic press release Friday acknowledging that their mission to debunk the rampant mythology found on the Internet was at odds with the fact they do not exist.

Author’s note: Having no PhD, I am unable to interpret the significance of this elaborate deception. Is there an academic in the house….? 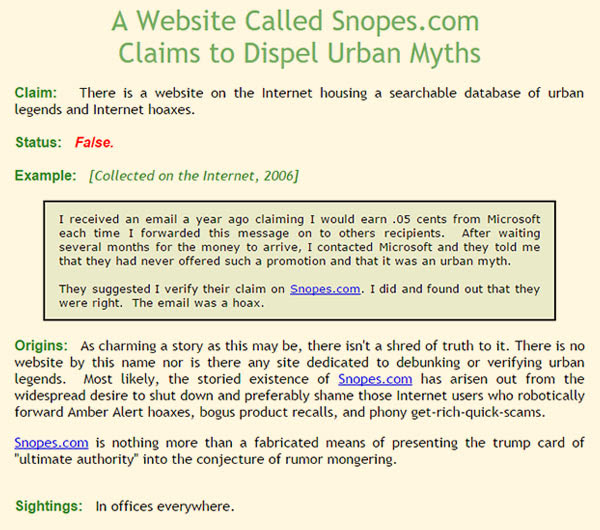