Director of product strategy and security for Dominion Voting Systems, Eric Coomer, is  an Antifa radical who is a key player in the massive voter fraud in voter tabulating systems.

Dr. Eric Coomer who is responsible for the strategy and Security at Dominion Voting Systems.

But if you search the company’s profile Eric Coomer has since been removed from their page of directors.
This was after Coomer was found to be a Trump-hating Antifa sociopath.

In 2016 Coomer told the Illinois States Board of Elections that it was possible to bypass election systems software during the vote counting process. [View screen shot here]

Here is the video:

And in 2017 Eric Coomer explained how to alter votes in the Dominion Voting Systems in a Chicago demonstration.

This then is the SECOND VIDEO of top Dominion executive explaining to elections officials how to alter votes with the Dominion machines! This was a separate demonstration in the Chicago area (notice he is wearing a dark jacket and is without the wrist protector.)

According to reports in late September Dominion’s radical Leftist Eric Coomer made a “critical software change” to GA’s Dominion voting machines “without adequate testing or certification from the U.S. Election Assistance Commission”.

This was reported in the Atlanta Journal Constitution.

A group of Georgia attorneys sued the state after news of the last minute changes to the Dominion voting machines. They called for paper ballots to be used instead of the controversial computer voting systems.

Secretary of State Brad Raffensperger called in Dominion’s Eric Commer to testify for him in the state’s defense.

Georgia election officials told a federal judge Monday that they’ll quickly correct a problem with touchscreen voting computers that left off the names of some of the 21 candidates in a special election for the U.S. Senate.

But attorneys suing the state government said they’re alarmed by technical difficulties so close to the time in-person early voting begins on Oct. 12. They want the government to replace the touchscreens with paper ballots filled out by hand.

Software on the state’s 30,000-plus touchscreens will be replaced to prevent an issue where the second column of U.S. Senate candidates sometimes didn’t appear. Those candidates included Republican U.S. Sen. Kelly Loeffler and Democrats Matt Lieberman, Ed Tarver and Raphael Warnock. Another Republican candidate, U.S. Rep. Doug Collins, wasn’t affected because his name appeared in the first column.

“The plaintiffs are flagging this as some apocalyptic scenario on social media, and it’s not. This is a very minor issue,” said Bryan Tyson, an attorney for Secretary of State Brad Raffensperger.

The issue, discovered last week during pre-election equipment testing in Douglas and Richmond counties, occurred when the second column of candidates didn’t appear because of a technical problem with how touchscreens communicated with their underlying Android operating system, said Eric Coomer of Dominion Voting Systems. He said the problem only happened rarely, when users made selections in a specific pattern.

David Cross, an attorney for the plaintiffs, said making a critical software change shows that the state’s voting technology is vulnerable to problems.

He said the software upgrade is being made without adequate security testing or certification from the U.S. Election Assistance Commission. But Coomer said the change is minor and doesn’t require recertification.

Election officials halted testing in the 77 counties where it had begun after they learned about the problem, said Gabriel Sterling, statewide voting system implementation manager.

DOMINION Director of Strategy and Security Eric Coomer: “Trump won’t win. I made F***ing sure of that.” 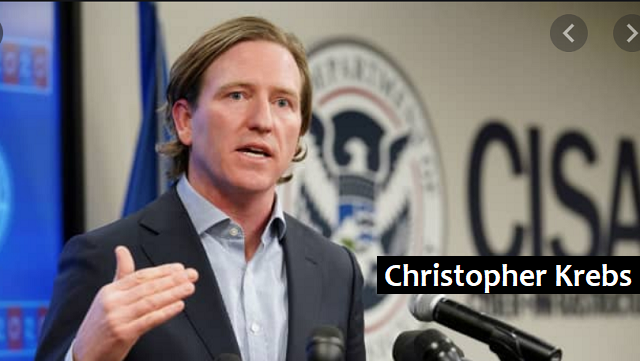 Could this Kreb clown been more incompetent? Or worse, complicit?

President Donald Trump announced Tuesday on Twitter that he has “terminated” top U.S. cybersecurity official Christopher Krebs. In a pair of tweets, Trump said that Krebs gave a “highly inaccurate” statement about the security of the 2020 presidential election.

‘Krebs, who heads the Department of Homeland Security’s Cybersecurity and Infrastructure Security Agency, is the latest Trump administration official to depart on the heels of the election.

In a pair of tweets, Trump said that Krebs gave a “highly inaccurate” statement about the security of the 2020 presidential election. Trump, who has not yet conceded to president-elect Joe Biden, alleged that there were “massive improprieties and fraud.”

Twitter labeled the president’s tweets with a warning citing the claim about election fraud is disputed.

Krebs, who heads the Department of Homeland Security’s Cybersecurity and Infrastructure Security Agency, has previously said that there is no evidence that the elections were compromised by foreign interference.

Earlier on Tuesday, Krebs tweeted from his government account, “On allegations that election systems were manipulated, 59 election security experts all agree, “in every case of which we are aware, these claims either have been unsubstantiated or are technically incoherent.”

Less than an hour after Trump tweeted about his firing, Krebs wrote from his personal Twitter account that he was “honored to serve.”

He is the latest Trump administration official to depart on the heels of the election.

On the heels of Esper’s removal, a Trump administration official told CNBC’s Eamon Javers that “I assume FBI and CIA are next,” referring to FBI Director Christopher Wray and CIA Director Gina Haspel.

The Department of Homeland Security did not immediately respond to a request for comment.

The latest revelation comes as Trump has rejected the results of the U.S. presidential election. Other top administration officials, such as Vice President Mike Pence and Secretary of State Mike Pompeo, have publicly insisted that the election is not over. The biggest story in 2020 is about the massive election fraud taking places across America. The media (CNN, NBC, ABC, etc.), social media (Twitter, Facebook, Google), the Democrat Party and their supporters are doing anything and everything to make us believe that this is a hoax, a conspiracy theory, and just not true. Let’s look at the facts concerning election fraud in 2020.

The four pillars of Election Fraud in 2020 are:

Read all about Dominion and Smartmatic voting companies and you’ll soon understand how pervasive this Democrat electoral fraud is, and why there’s no way in the world the 2020 Presidential election was either free or fair. #MAGA @realDonaldTrump #AmericaFirst #Dobbs https://t.co/H38VvuvSUQ

Who is Dominion Systems and why are they suspect in 2020?

On August 14, 2018 in a column titled Louisiana doesn’t need any hacks in its election system Tim Morris wrote:

Election Systems and Software, one of the two losing bidders, complained that the [Louisiana] secretary of state’s office released add-on standards weeks later than allowed and that one set of standards was so specific that only Dominion Voting Systems would qualify, according to records obtained by The Associated Press. [Emphasis added]

Four senior senators have called on the largest U.S. voting machine makers to explain why they continue to sell devices with “known vulnerabilities,” ahead of upcoming critical elections.

The letter, sent Wednesday, calls on election equipment makers ES&S, Dominion Voting and Hart InterCivic to explain why they continue to sell decades-old machines, which the senators say contain security flaws that could undermine the results of elections if exploited.

“The integrity of our elections is directly tied to the machines we vote on,” said the letter sent by Sens. Amy Klobuchar (D-MN), Mark Warner (D-VA), Jack Reed (D-RI) and Gary Peters (D-MI), the most senior Democrats on the Rules, Intelligence, Armed Services and Homeland Security committees, respectively. “Despite shouldering such a massive responsibility, there has been a lack of meaningful innovation in the election vendor industry and our democracy is paying the price,” the letter adds.

Their primary concern is that the three companies have more than 90 percent of the U.S. election equipment market share but their voting machines lack paper ballots or auditability, making it impossible to know if a vote was accurately counted in the event of a bug. [Emphasis added]

The Vote-Switching Ghost in the Machine – Quadrant Online https://t.co/wQmWEyX8uV

On November 14th, 2020 in an article titled The Vote-Switching Ghost in the Machine  Tony Thomas from Quadrant Online reported:

It now looks like Deep State criminals have tweaked voting machine software to switch Trump votes – possibly millions of them —  to Biden to create the illusion of a Democrat victory. You don’t have to believe me on this. If you still retain a smidgen of high-school algebra, the data patterns in voting in the swing state of Michigan speak for themselves.

A team of three engineers and software analysts have demonstrated that a minimum of 69,000 votes there were switched from Trump to Biden. Biden is supposed to have won Michigan and its 16 Electoral College votes by about 146,000 votes in an electorate of 5.4 million.

The Michigan auditing team was Dr. Shiva Ayyadurai, an MIT trained data scientist and Fulbright Scholar and now Republican Senate candidate; Bennie Smith, a Democrat and software engineer, data analyst and an election commissioner; and Phil Evans, engineer and data analyst. They analysed voting patterns in Michigan’s four biggest counties and concluded the patterns must have resulted from an inserted algorithm that switched salami-slices of votes from the Trump tally to the Biden column. The greater the voting support for Trump and Republicans, the bigger was the slicing-off for Biden.

Who is Right? Whos Claim Should be Disputed?

Dominion categorically denies any claims about any vote switching or alleged software issues with our voting systems. Please visit our Setting the Record Straight page for more information:https://t.co/DP6zry4LPq

The former data and strategy director for President Donald Trump’s 2016 election campaign has canceled his vacation plans to comb through election data for voter fraud.

Matt Braynard and his wife had planned to be in the Dominican Republic, but “right now, this is where I’m needed,” he said on YouTube on Nov. 8.

Braynard has assembled a team to look for inconsistencies in the six contested states—Pennsylvania, Georgia, Michigan, Wisconsin, Arizona, and Nevada.

So far, they’ve identified 1.25 million voter issues that they’re following up on through phone calls and against other databases.

Watch Matt Braynard discusses the Voter Integrity Project. (Note from Matt Braynard: yes, I misspoke in the beginning; I was with Trump in 2016, not 1996 and, actually, back in 2015!)

The only way to determine who is right and who is wrong is to do a complete audit of the votes recorded by Dominion. Then, and only then, can each disputed states’ votes be certified.

The election software system in Michigan that switched 6,000 votes from Trump to Biden is called "Dominion."

It is used in 30 states including:

Every single major swing state. EVERY. SINGLE. ONE. pic.twitter.com/R6s2RnVmEF

Dems who sent formal complaint on problem-prone Dominion Voting in 2019 include Warren, Klobuchar

Pollster: It’s Curious How Biden Underperformed Hillary Clinton In Every City…Except These Four.

Pennsylvania Mail-In Ballot Snafu Is Ripe For The U.S. Supreme Court To Intervene