Earth Day was declared in 1970 and for the past 45 years we have all been living in the Environmental Insane Asylum, being told over and over again to believe things that are the equivalent of Green hallucinations. Now the entire month of April has been declared Earth Month, but in truth not a day goes by when we are not assailed with the bold-faced lies that comprise environmentalism.

Around the globe, the worst part of this is that we are being victimized by people we are told to respect from the President of the United States to the Pope of the Catholic Church. Their environmentalism is pure socialism.

Organizations whom we expect to tell the truth keep telling us that “climate change is one of the biggest global security threats of the 21st century.” This was a recent statement by “world leaders” like the G7, a group of finance ministers and central bank governors of seven advanced economies, the International Monetary Fund, Canada, France, Germany, Italy, Japan, and the United States. On April 17 they adopted a report about the “threat” put together by think tanks that included the European Union Institute for Security Studies and the Wilson Center in Washington, D.C.

When I speak of “climate” I am referring to data gathered not just about decades, but centuries of the Earth’s cycles of warming and cooling. When I speak of “weather”, the closest any of us get to it other than today’s, are local predictions no longer than a few days’ time at best. The weather is in a constant state of flux.

Climate change is not a threat and most certainly there is no global warming. As Prof. Bob Carter, a geologist at James Cook College in Queensland, Australia, has written, “For many years now, human-caused climate change has been viewed as a large and urgent problem. In truth, however, the biggest part of the problem is neither environmental nor scientific, but a self-created political fiasco.”

The fact that the Earth is now into the nineteenth year of a natural planetary cooling cycle seems to never be acknowledged or reported. “The problem here,” says Prof. Carter, “is not that of climate change per se, but rather that of the sophisticated scientific brainwashing that has been inflicted on the public, bureaucrats and politicians alike.”

In a book I recommend to everyone, “Climate for the Layman” by Anthony Bright-Paul, he draws on the best well-known science about the Earth noting that “Since there is no such thing as a temperature of the whole Earth all talk of global warming is simply illogical, ill thought out, and needs to be discarded for the sake of clarity. The globe is warming and cooling in different locations concurrently every minute of the day and night.”

“Since it is abundantly clear that there is no one temperature of the atmosphere all talk of Anthropogenic Global Warming (AGW) is simply an exercise in futility.” A look at the globe from either of its two poles to its equator and everything in between tells us with simple logic that being able to determine its “temperature” is impossible. The Earth, however, has gone through numerous warming and cooling cycles, all of which were the result of more or less solar radiation.

The Sun was and is the determining factor. The assertion that humans have any influence or impact that can determine whether the Earth is warmer or cooler is absurd.

The Earth had passed through warming and cooling cycles for billions of years before humans even existed, yet we are told that the generation of carbon dioxide through the use of machinery in manufacturing, transportation or any other use is causing the build-up of “greenhouse gases” in the atmosphere. We are told to give up the use of coal, oil and natural gas. That is a definition of insanity!

Here’s the simple truth that most people are not told: The Sun warms the Earth and the Earth warms the atmosphere.

Without carbon dioxide there would be no life on Earth. It feeds the vegetation on which animal life depends directly and indirectly. As Anthony Bright-Paul says, “A slight increase in atmosphere of carbon dioxide will not and cannot produce any warming, but can be hugely beneficial to a green planet.”

The Earth’s atmosphere is approximately 78% Nitrogen, 21% Oxygen, 0.9% Argon, 0.04% Carbon Dioxide, and the rest is water vapor and trace gases in very small amounts. They interact to provide an environment in which life, animal and vegetable, exists on Earth.

When you live in a Global Environmental Insane Asylum, you are not likely to hear or read the truth, but you can arrive at it using simple logic. We know instinctively that humans do not control the waves of our huge oceans, nor the vast tectonic plates beneath our feet, the eruptions of volcanoes, the Jetstream, cloud formation, or any of the elements of the weather we experience, such as thunder, lightning, and other acts of Nature.

Why would we blindly assume or agree to the torrent of lies that humans are “causing” climate change? The answer is that on Earth Day, Wednesday, April 22, we will be deluged with the propaganda of countless organizations worldwide that we are, in fact, endangering a “fragile” planet Earth. We hear and read that every other day of the year as well.

The achievement of the human race and the last 5,000 years of so-called civilization is the way we have learned to adapt to Nature by creating habitats from villages to cities in which to survive and because we have devised a vast global agricultural and ranching system to feed seven billion of us.

As for the weather, John Christy, the director of the Earth System Science Center at the University of Alabama, says he cringes “when I hear overstated confidence from those who describe the projected evolution of global weather patterns over the next one hundred years, especially when I consider how difficult it is to accurately predict that system’s behavior over the next five days.”

“Mother Nature,” says Christy, “simply operates at a level of complexity that is, at this point, behind the mastery of mere mortals—such as scientists—and the tools available to us.”

Whether it is the President or the Pope, or the countless politicians and bureaucrats, along with multitudes of “environmental” organizations, as well as self-serving “scientists”, all aided by the media, a virtual Green Army has been deliberately deceiving and misleading the citizens of planet Earth for four and a half decades. It won’t stop any time soon, but it must before the charade of environmentalism leaves us all enslaved by the quest for political control over our lives that hides behind it.

We must escape the Environmental Insane Asylum in which they want us to live. Comrades, Earth Day™ is just around the corner. We’re not talking about Christmas or Easter or Yom Kippur, we’re talking about Lenin’s Birthday!Now some outdated, religious traditions include themes of guilt and forgiveness. You know the routine. We are guilty before God and justly deserving of His punishment, but He lays our sins on His Son, Jesus Christ, and that by believing in Him we can find forgiveness of sin and eternal life. But that’s so two millennia ago.

On the other hand, Earth Day (Lenin’s Birthday!) is so progressive that it offers guilt and more guilt! See, in this advanced, highly evolved, and inclusive belief system, you are guilty before Gaia for exhaling and destroying her atmosphere, turning it into an “open sewer” to quote the Prophet Algore (PBUH). Now with Gaia, there’s none of this nonsense about atonement, justification, or propitiation. Those are big words and too hard for you to understand. You’re guilty because you might drive an SUV, consume food, once used electricity, or maybe you’re just plain white. You may have accessed healthcare to prolong your selfish, resource sucking life, and that means some poor minority child or kitten was denied healthcare – just because of you. 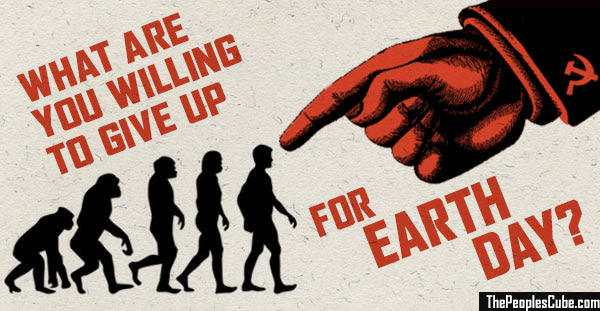 Forgiveness? Are you serious? When it comes to the Green Gospel, there’s only one solution, and that’s extermination. If it wasn’t for man, Bambi’s mother would be alive today instead of having her head mounted over some redneck’s fireplace desecrated with a bandanna and non-union manufactured sunglasses. We need a plan for sustainability. That’s a big word, but what it means is that we get to decide who’s a burden to Earth Mother, and who isn’t.

So who’s guilty, you ask? Probably you. Why do you think you dig holes in the ground on Earth Day? One happy day, perhaps Next Tuesday™, our government will be empowered to recycle its non-productive, Earth exploiting citizens. It’s called giving back, and it’s the only way you can redeem yourself. If we don’t take action now, all the furry animals will be dead in just ten years.

But until Next Tuesday comes along, you need to do your part. You need to confess your guilt. You need to give back. So in the days leading up to Earth Day, you need to tearfully, publicly, and loudly proclaim your sins against Gaia. You need to publish your shame by wearing awareness ribbons and riding a bicycle. In so doing, you induce feelings of necessary guilt in others, and you get a smug sense of self-righteous satisfaction because you care more. What’s not to like?

So come on, comrades, what are you willing to confess and give up in the days left before Earth Day? 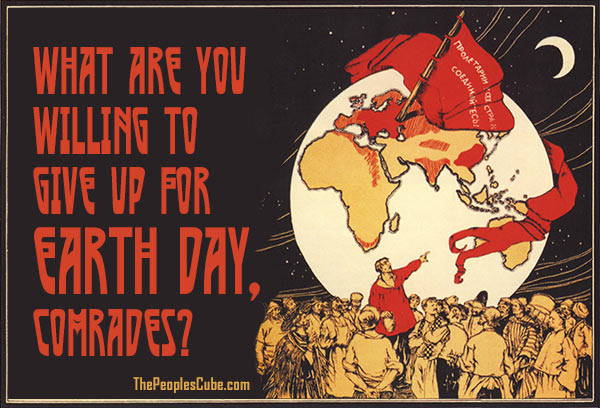