It’s every parent’s nightmare, but true: Major U.S. corporations are funding a campaign of sophisticated, psychologically intrusive “gay” indoctrination programs targeting very young children in elementary schools across America. It’s part of a very well-planned and well-funded effort to reach children as young as possible without their parents’ intervention. 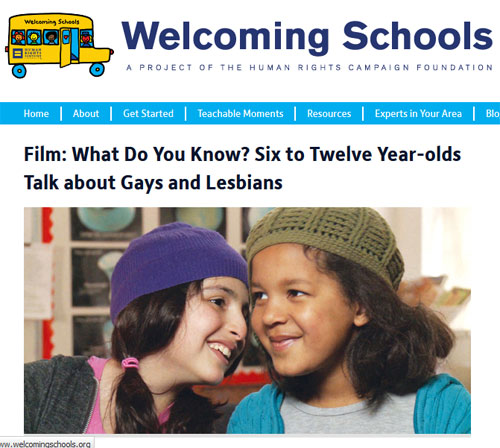 (1) Introducing the concept of homosexuality to children.

(2) Telling them that homosexuality is normal and natural.

(3) Telling them that their parents or friends who portray homosexuality in a less than positive way are bad people – intolerant, bigoted, etc.

The “Welcoming schools” website has even posted a video that describes their program and shows how effective these psychological techniques are in molding young children’s minds:

As MassResistance has reported, major US corporations are enabling this through large donations to the radical national LGBT group Human Rights Campaign (HRC). HRC created and runs the Welcoming Schools program and has representatives in regions around the country pushing it in elementary schools.

Of particular concern and outrage was the recent arrest of HRC’s founder and current Board member, Terry Bean, for “third degree sodomy” of a 15-year-old boy. HRC has had no comment on that incident, but it continues a vicious campaign of harassment against pro-family leaders with whom it disagrees. But this has not deterred corporate donations to HRC in any way that we can determine.

Bringing it into the schools

Among the vehicles they use to bring this into the schools are the “anti-bullying” laws which the national LGBT movement lobbied heavily for in states across the country over the last several years. As MassResistance warned at the time these laws, which were largely written and/or influenced by LGBT groups, invariably have little to do with legitimate anti-bullying behavioral science. Instead they require schools to provide LGBT “diversity training” and mete out punishment for “anti-gay” opinions or discussion.

Not surprisingly, nothing is said told to kids about the extensive medical and psychological dangers of homosexual behavior, including a range of diseases, addictions, domestic violence, and other social pathologies.

Confronting the corporations that fund this

The companies pouring money into HRC read like a who’s who of corporate America. You can see some of the names HERE.

But MassResistance is fighting back. As we’ve reported, we have been helping people to contact these companies – by phone, email, and letter – and tell their corporate staffs in no uncertain terms what we think of their actions – and demand that they stop it.

It’s quite shocking. Companies that many of you patronize at one time or another are using your money to subvert your own young children’s minds to accept and support a dangerous perversion.

When people manage to actually speak with corporate representatives, the companies don’t deny what they’re doing. They talk about how proud they are to be fighting for “tolerance” and “diversity.” They seem to have no misgivings at all when outraged parents contact them.

We contacted these four companies — to start with.

What that tells us is that we need to step up this fight. Most of these companies have never heard from pro-family people before. They only hear from radical homosexual activists. With your help, that will change!

A generous donor has offered to donate $10,000 if we can raise an equal amount by midnight Wednesday, Dec. 31. You can really make your money work for you — and get a year-end tax donation also. (See our 77-second video on what MassResistance is doing.)

But it needs to be done by midnight Wednesday, Dec. 31.

Here are two ways you can do it:

All donations sent by Dec. 31 will receive TWO of our “not equal” stickers, suitable for your car … or, be creative!

Let’s ring in the New Year with a big push!

Fight back with the truth — our MassResistance “not equal” stickers!

(Get two free with each donation.) Terrence Patrick Bean, pictured above with President Obama, founded the “Human Rights Campaign” (HRC). Bean is a Democrat. Bean is a bundler for Barack Obama and the DNC. Bean is a homosexual. Bean is a pederast. Bean has been indicted by an Oregon Grand Jury for raping a 15-year old boy. Bean’s boyfriend Kiah Ley Lawson, has been arrested for sexually molesting the same boy.

The Human Rights Campaign has been working to bring the homosexual lifestyle into K-12 public schools. HRC is working to have marriage amendments passed by a majority of voters in states like Florida overturned in the name of “marriage equality.” HRC is built upon a homosexual agenda that seeks to redefine not only marriage but sexuality itself. HRC’s leader is a radical homosexual who’s work with Democrats has helped to destroy the family structure by destroying the institution of marriage as between one man and one woman raising their biological children.

Bean is going to be tried for the crime of pederasty, the rape and violation of an under age boy by an older man.

Bean has been the poster child for and remains a hero of the radical homosexual movement. Bean, 66, a prominent gay rights activist and major Democratic Party fundraiser, was arrested at his home in Southwest Portland and booked into the Multnomah County Detention Center at 10:12 a.m.

Bean, who bailed out of jail by late Wednesday afternoon, will be arraigned on the indictment in Lane County. …

The alleged incident involved a sexual encounter in Eugene with a 15-year-old boy. …

Bean has been one of the state’s biggest Democratic donors and an influential figure in gay rights circles in the state. He helped found two major national political groups, the Human Rights Campaign and the Gay and Lesbian Victory Fund, and has been a major contributor for several Democratic presidential candidates, including Barack Obama. He’s also a close friend of former Gov. Barbara Roberts. …

Bean’s Flickr account shows him talking with Obama at several events, posing with first lady Michelle Obama and numerous other political figures, including former President Bill Clinton.  A blog post from his sister, Sue Surdam Bean, detailed her brother’s work on a July 24, 2012 Obama fundraiser in Portland.  She included three photos of Terry Bean’s ride on Air Force One with Obama to a subsequent event in Seattle.

Just two years ago 68 year old Harry Brinkin, another high profile and similarly respected (at least among Democrats) homosexual activist, was arrested in San Francisco for possessing and distributing reams of child pornography.

CNS News Reported at the time:

Police said that Brinkin, a former city employee, apparently had photos of children, as young as 1- or  2-years-old, performing sexual acts and being sodomized by adult men in attachments linked to the email address, reported The Chronicle. The email account was also linked to Yahoo discussion groups involving sexual exploitation of young people.

Concerning Brinkin, Theresa Sparks, director of the Human Rights Commission, told the Huffington Post, “It’s almost incredulous, there’s no way I could believe such a thing.”

“He’s always been one of my heroes, and he’s the epitome of human rights activist,” she said. “This is [the] man who coined phrases we use in our daily language. I support Larry 100 percent; hopefully it will all come out in the investigation.”