Stuttgart – The alleged murderer who attacked and killed a 36-year-old German with a sword on Wednesday evening in broad daylight is said to be a Palestinian who claims to have been a Syrian refugee.

According to Stuttgarter Zeitung, the 30-year-old alleged sword killer is said to be a Palestinian known to the police, who has acquired a Syrian identity. Once again, the German state has apparently accepted his data completely unchecked. The “Syrian” is said to be living in Germany for four years and is registered with the authorities as Issa M. (28). The authorities will now determine whether the perpetrator really is another person, according to the Stuttgarter Nachrichten. The “Syrian” Issa M. yesterday slaughtered a man with several blows and stabs in a block of flats in Stuttgart after a quarrel his former roommate in front of numerous eyewitnesses. And we say again: Thank you, Mrs. Merkel.

NATO ally Germany refuses to back U.S. in Gulf out of fear of Iran GAINESVILLE, FL – Reading reports from a conference on white privilege held at the University of Florida, local immigrant Diana Yahaira Vasquez Alban, couldn’t help but empathize with the pain and suffering of minority students and academic staff in American colleges, which appeared to be much worse than the poverty and crime she had experienced in her native South America.

“I had no idea that such discrimination existed in this country, and I feel bad for these poor people,” said the 26-year-old Green Card holder from Peru, who was moved to tears by the coverage of the event in the UF’s online student newspaper, Independent Florida Alligator.

Held at the University of Florida’s Center for the Study of Race and Race Relations, the conference focused on drawing attention to white privilege, which is the science that explains how persons born with white skin are granted certain advantages that are denied to persons born with darker skin, but also encompassed other privileges such as male privilege, heterosexual privilege, and Christian privilege.

The event’s keynote speaker was Peggy McIntosh, author of “White Privilege: Unpacking the Invisible Knapsack,” who explained that “white privilege is like an invisible weightless knapsack of special provisions, maps, passports, codebooks, visas, clothes, tools and blank checks,” and that “those who happen to be born into the group that is given the benefit of the doubt, given jobs, assumed to be good with money, assumed to be reliable with families are given a tremendous power. I urge all whites here to use your white power, which you have more of than you were taught, to weaken the system of white power.”

But it was the accounts from attendees of the conference that broke Alban’s heart. “The lady told her listeners to turn to people around them and talk about ways they had been discriminated against,” she said.

“There was a video of one lady, and she had such a hard life that she was crying and yelling at everyone,” recalled Alban, referring to a video clip of UF Levin College of Law 3L Alejandra Garcia, local activist and granddaughter of Cuban refugees. “She screamed a lot of things, like people thought she was a Mexican, that boys stare at her butt, that she should be able to use any bathroom she wants, and that her professors don’t… I didn’t understand about the professors.” A review of the video clarified that professors at the law school failed to nurture the goddess within Garcia.

Lowering her gaze, Alban sadly commented, “I saw many very bad things happen to women in Lima, but my house didn’t have electricity or water, so we didn’t have to suffer about bathrooms like the lady. I didn’t like when rats would crawl on me at night and I would wake up and have to break their necks, but I…” Alban paused briefly to compose herself. “I’m sorry, I just don’t understand why Americans are so mean to that lady to make her act like that.”

Alban was particularly shocked by the story of UF sophomore Delvim Maclin, who said that before being awarded a “Bright Futures” scholarship to the state’s flagship university, he lived in a depressed, predominantly African-American neighborhood of Jacksonville, and that he often received suspicious stares from clerks as he used food stamps to shop for groceries.

Alban, who grew up in Peru sharing a single room with her grandmother, mother, and aunt, felt particular pain at Maclin’s plight. “We mostly ate just rice, but sometimes we could buy a chicken. Gato on the corner would smile at me as he killed the chicken, put it in hot water for just a little bit, and pulled out the feathers. He knew we didn’t have money, so he was happy when I could buy a chicken from him. I wish the black guy’s grocery store was more like Gato.”

“There was also this professor from Iran, he was very angry about the weird looks he gets from people at airports,” continued Alban. “And he can never get a seat in the exit row or first class because the airline people are racist, and that hurts his feelings a lot. The poor man is suffering, and I can’t believe that it’s America’s fault.”

Alban brought home the inequalities highlighted by the conference: “I had a hard time when two years ago I came to USA. I couldn’t get a job because my English is no good and I don’t have experience. But I improved my English and just worked any place I could, and it was ok. I have a job now that I don’t like, but is full time and I could buy a Hyundai and learned to drive. I hope I can find a better job next. But those poor people at the university… I’m going to ask Jesus to help them.” 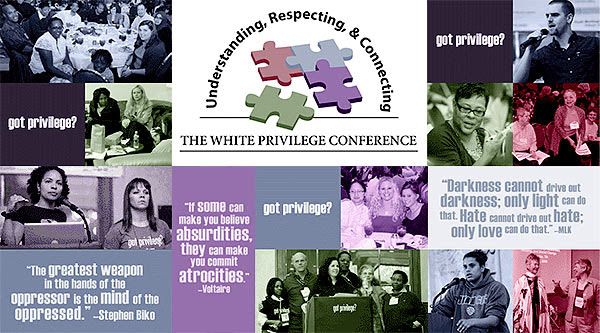