INDIANAPOLIS, IN – Jason McKay has made a living for himself by assisting criminologists and psychologists in creating psychological cases of some of the world’s most dangerous and high profile criminals, cult leaders, and killers in recent history. In the past twenty years, McKay has also been called on by FBI investigators to help with their investigation of serial killers, such as Jeffrey Dahmer or the BTK killer, which resulted in him creating extensive and invaluable case files that have since become gold standard in criminology.But it wasn’t until February of 2016 that McKay has also caused a political stir with some extremely unsettling observations he made while watching Hillary Clinton give a speech in front of minority audiences.According to McKay, Hillary Clinton has been clearly mimicking the body language and speech structure of the cult leader James Warren “Jim” Jones, the leader of the People’s Temple, who on November 18, 1978 organized a mass suicide with cyanide-laced Kool-Aid, taking the lives of 918 people at Jonestown, Guyana. 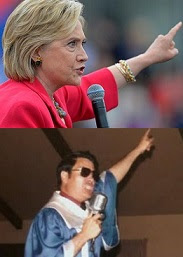 “I don’t usually watch politics,” said McKay while pulling up a video clip of Jim Jones to make his point. “I was just flipping through channels when I stopped on Hillary Clinton giving a speech and talking about racial issues in the United States. Something seemed disturbingly familiar about how she was presenting herself to those people. So I’d been watching her very intently for a few weeks after that, until I figured out just who she reminded me of.”

It wasn’t until McKay observed the crowds around her that it finally clicked:

“Once I made that connection everything started to fall into place effortlessly. It wasn’t only Mrs. Clinton’s body language. It was also the people around her – they all seemed under some kind of spell. She was consciously manipulating the crowd of minority voters to get them to follow her unconditionally, without question.”

“There really is a science to what she’s doing here,” said McKay.

“Every charismatic leader you can think of – from presidents to dictators to cult leaders – all have a unique way of presenting themselves to the public,” continued McKay. “What they say and how they say it is always calculated and practiced for countless hours in front of the mirror, as they hone their skills in the art of public persuasion. Hillary Clinton is no exception; I just find it curious that she is borrowing her techniques directly from Jim Jones. There’s no doubt about it.”

McKay spent weeks analyzing every word, speech pattern, and body movement made by Hillary Clinton as he painstakingly compiled a psychological case file on the Democratic front-runner. He discovered that Clinton deployed distinctly different combinations of language and demeanor. These combinations, or “sets,” remain tucked away in her head like the various pantsuits in her closet, until she decides which one she should put on depending on who the audience is.

“For example, when Hillary presents herself to African-Americans, she uses a lot more hand gestures, while her sentence structure and timing are identical to those used by Jim Jones. She doesn’t speak or move that way in front of any other demographic. It may be almost undetectable to the untrained eye, but it’s unmistakable once you learn to identify the patterns. This isn’t by accident; this is a choreographed and rehearsed display.” 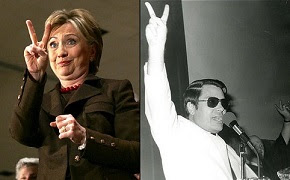 Jim Jones was known for building his following by preying on victimized minority groups. He depended on them for social and financial support, over time luring thousands of people into his fold. Jones’s deception relied heavily on politics of social justice and redistribution of wealth, which he used to hypnotize and brainwash his followers.

According to McKay, those same hypnotic techniques used by Jim Jones can be clearly observed in Hillary Clinton’s speeches designed to secure the minority vote.