Yesterday, December 7, 1941 – a date which will live on in our memories with hashtags, awareness ribbons, and candlelight vigils – America was attacked. While we haven’t yet ruled out the naval and air forces of the Empire of Japan, we must be careful not to jump to hasty conclusions for what might have been an act of workplace violence.The United States was at peace with Japan and, at the solicitation of its government, we were still in conversation about the maintenance of peace in the Pacific. Indeed, one hour after Japanese air squadrons had commenced bombing in Oahu, the Japanese Ambassador to the United States and his colleague were negotiating a performance of James Taylor’s You’ve Got a Friend with Secretary of State Kerry. While this may appear suspicious, we must not blame the entire Japanese Empire for the actions of a few.

It will be recorded that the distance of Hawaii from Japan makes it obvious that the attack was likely the result of a few disgruntled employees, maybe even the Emperor’s wife suffering from post-partum depression. Therefore, I urge patience and understanding.

The attack yesterday on the Hawaiian Islands has caused severe damage to American naval and military forces. Very many American lives have been lost. In addition American ships have been reported torpedoed on the high seas between San Francisco and Honolulu. No doubt these attacks were carried out by lone wolves who have hijacked the noble religion of Shinto which, we must remember, built the very fabric of our nation.

Japan has, in the minds of a few intolerant Asiaphobes, undertaken a surprise offensive extending throughout the Pacific area. The facts of yesterday speak for themselves, they say. The people of the United States have already formed their opinions and well understand the implications to the very life and safety of anyone who dares to engage in anti-Japanese rhetoric that edges toward violence.

As Commander-in-Chief of the Army and Navy, I have directed that all measures be taken for the immediate reduction of our military forces, especially our navy. Like I’ve said since since the invasions of Poland and France, every time something like this happens, these sort of military actions just don’t happen in other countries. I think it’s time to reconsider the Kellogg-Briand Pact which made war illegal, and to rethink the Washington Naval Treaty. If we could take combat vessels off of the high seas, events like these wouldn’t happen. We could make the oceans safer for our children.

Always will we remember that this would never have happened if America hadn’t acted arrogantly during the Spanish-American War by seizing overseas territories. No matter how long it may take us to overcome our own bigotry, the American people will reflect and support common sense arms reductions.

I believe I interpret the will of the Congress and of the people when I assert that we will not only decommission all of our naval assets, but make sure we never again threaten other countries with a military that air raids villages and kills civilians.

Hostilities exist. There is no blinking at the fact that our people, our territory and our interests are primarily responsible. In the meantime, I don’t want to hear any nonsense about “America leading” or “America winning”.

With confidence in our policy of tolerance – with the unbounded determination of our people – we will lead from behind – so help us, uh, I’ll come back to that.

Given that the provoked and understandable attack by Japan was caused by a despicable video on YouTube, I ask that the Congress declare that the future must not belong to those who insult the Emperor of Japan and the peace-loving religion of Shinto. 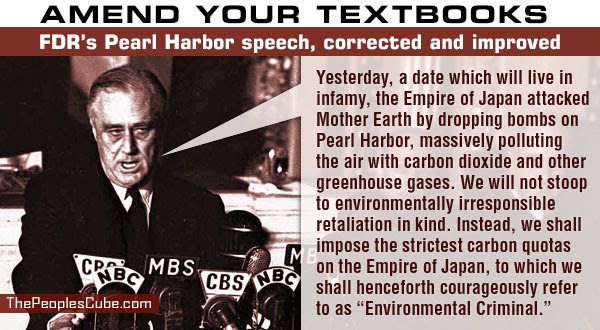 No, Pearl Harbor is not ancient history. It’s part of my history and many others who were alive at the time. I was just an infant, but the Japanese sneak attack on our Hawaii naval base led to early memories of being on trains filled with young soldiers, many of whom did not live to return home.

The attack was on December 7, 1941 and a day later in a speech to Congress, Franklin Delano Roosevelt called it a “date that will live in infamy.” War was declared on Japan and on Germany. Four years later both enemy nations were conquered, largely due to America’s capacity to gear up to provide everything our armed forces needed. It was won, too, because it was a war to protect freedom from authoritarian, anti-Democracy enemies.

A new book, “Blinders, Blunders, and Wars: What America and China Can Learn”, has been published by the Rand Corporation that describes itself as a “research organization that develops solutions to public policy challenges to make communities throughout the world safer and more secure, health and more prosperous.” It was formed after World War II to connect military planning with research and development decisions. It is an independent, non-profit organization. The study looks at eight strategic blunders.

As David C. Gompert, the lead author of the book and senior fellow at Rand, said, “Leaders who blunder into war tend to have unwarranted confidence in their ability to script the future and control events. They favor information, analysis, and advisors that confirm their beliefs over those that contradict them. In essence, blinders cause blunders.”

While Americans are still debating whether we should have gone to war in Iraq in 2003 or whether our troops should have been withdrawn by 2011, the cold fact of Islamic aggression has seen President Obama reintroduce and increase our “boots on the ground.” Enemies cannot be ignored. At best they can be “contained” until, like the former Soviet Union, they collapse or change in some fashion. Assuming, as our current negotiations with Iran suggest, that they do not harbor extremely dangerous intentions can be fatal.

The authors of the Rand study call Japan’s decision to bomb Pearl Harbor “a blunder of the highest order.” It followed a succession of decisions the Japanese leadership, largely military, had made to invade China and southern Indonesia in the quest to secure the oil and raw materials it needed for its industrial sector. They saw themselves as a people superior to others in Asia and the world. As Herbert Feis, the author of “The Road to Pearl Harbor” wrote, “The Japanese people came to believe that the extension of their control over this vast region was both natural and destined.”

World War II had its roots in the sanctions meted out to Japan and Germany after World War I. In Japan’s case, its invasion of Manchuria in 1931 and China in 1937 put the U.S. on guard and produced sanctions that included halting exports of scrap iron, steel, and aviation fuel, as well as arms, ammunition, and critical raw materials. The U.S. began to build up its naval forces as well. It was a good decision. The attack on Pearl Harbor sealed Japan’s fate. “On December 7, 1941, Yamamoto, commander of the carrier task force north of Hawaii, order the attack. Two waves of Japanese aircraft, 353 in total, damaged all eight battleships in Pearl Harbor. Four were sunk, two of which were raised eventually. Six of the eight returned to service later in the war.”

“Significantly, the three U.S. aircraft carriers were at sea on routine maneuvers. No U.S. submarines were destroyed. A third wave of attack was not ordered by Yamamoto due to fuel shortage; consequently, facilities such as dry docks, ammunition dumps, power stations, and fuel storage facilities were not destroyed…Despite the tragic losses, Pearl Harbor and most of its fleet were able to recover fairly quickly.”

The Japanese leaders had seriously misunderstood Americans. “America instantly took a war footing. Six months later, at Midway, Japan sought to finish off the American carriers. Instead, aided by code breaking and some luck, planes from three U.S. carriers sank four of the six Japanese carriers that had struck Pearl Harbor.”

The arrogance and miscalculations of the Japanese leadership led to the loss of 2.3 million of their people, the firebombing of its major cities, the invasion of Okinawa, and the destruction of Hiroshima and Nagasaki by atomic bombs.

The Rand study has lessons for America today. “Japan saw the United States as having weak will and capability. The U.S. military had been allowed to deteriorate over a twenty-year period; isolationism and neutrality reflected America’s interwar mood.”

Today, our military is as small or smaller than it was at the beginning of World War II. A President elected on the promise to remove our troops from Iraq and Afghanistan is having second thoughts, but is emptying out our detention center in Guantanamo, returning its inmates to the battlefield in the Middle East. After six years in office, he is about to appoint his fourth Secretary of Defense.

We have been in a state of war with Islamic fascists since even before September 11, 2001. They have even declared themselves to be the Islamic State.

There have been three generations of Americans born since the attack on Pearl Harbor in 1941 and that is time enough for many of them to either never have learned or to have forgotten the lessons of that event. The Obama administration has done everything in its power to deflect any anger toward the Muslim fanatics killing people in the name of their holy war. We are constantly warned against “Islamophobia.”

To avoid a sneak attack, you have to know who your enemy is and why. Despite a previous attack on the World Trade Center in 1993, we let down our guard. We cannot do that again for a very long time to come.

EDITORS NOTE: The featured image is courtesy of DW4Me.me.