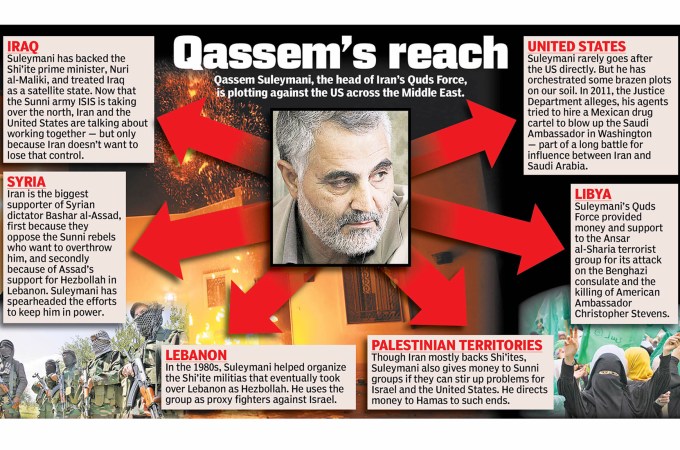 According to two separate Western intelligence sources, Soleimani arrived in Moscow on Iran Air flight 5130 from Tehran on July 24, ten days after the nuclear agreement between Iran and six world powers was announced that included a provision to lift the arms embargo on Iran.

“Under the United States’ initiative, Qassem Soleimani will never be relieved of any sanctions,” Kerry told the Senate Armed Services Committee.

In June, Russia announced it would send S-300 anti-aircraft missiles to Iran by next year according to officials.

In January 2015 we noted in an NER/Iconoclast post the visit of Russian Defense Minister Shogui to Tehran to meet Iranian Defense Minister Gen. Dehghan to sign a mutual defense treaty and the delivery of the updated S300 system objected to by the US and Israel in 2010 and subsequently banned under UN Security Resolution 1929 on conventional arms and ballistic missile technology.  Gen. Shogui is an intimate member of President Putin’s inner circle and some observers indicate could be a possible successor.  TAAS reported the US studying the announced Russian –Iranian military agreement, but specifically objecting to possible shipment of the S-300/400 air defense system. Russia might finally ship Iran the advanced S-300 air defense system that both the US and Israeli successfully lobbied former Russian President Medvedev in 2010 to cancel.  Immediate payment by Iran of $800 million for the S-300 system may have cemented the deal.

Fox News noted the comments of Administration officials about this breach of UN sanctions:

The U.S. ambassador to the United Nations, Samantha Power, said Friday the U.S. is very concerned about the development.

“Qassem Soleimani is subject to a UN travel ban and this travel ban requires all states to prohibit Qassem Soleimani from traveling to their nation and the only exception to that is if the Iran sanctions committee grants an exemption,” she said at UN headquarters in New York.

The White House did not specifically blame the Russians for hosting the Iranian general.

“I can’t confirm these specific reports but it is an indication of our ongoing concerns with Iran and their behavior,” White House press secretary Josh Earnest told reporters Friday at the daily press briefing.

“We should not underestimate what this means to our national security,” he said. “A leading general in Iran just told the world that the United States of America is irrelevant and Russia welcomed him with open arms. Not only do Russia and Iran not fear us, they do not respect us. And that is dangerous.”

“He’s directly responsible for the murder of over 500 American servicemen in Iraq and part of this Iranian deal was lifting international sanctions on Gen. S – the day Gen. S flew back from Moscow to Iran was the day we believe Russia used cyber warfare against the joint chiefs,” said Sen. Ted Cruz, R-Texas.

While the Administration and media tries to portray this latest episode as evidence of hard liners in Iran trying to upend the JCPOA, we are not buying any of these explanations.  It illustrates how incompetent the Administration has been in conducting its diplomatic initiatives with two geo-political autocrats, Supreme Leader, Ayatollah Khamenei and Russia’s President Putin.  The import of the Russian commitment to deliver the S300 air defense system is not lost on Israeli PM Netanyahu and Sunni US allies in the Middle East as it calls into question the credibility of any conventional military option for dealing with Iran’s nuclear weapons program.  This episode should be another clear  demonstration  to wavering Democrat  US Senators and Representatives that Iran will cheat on its agreements under the JCPOA to further its ambitions become a nuclear threshold and state supporter of  global terrorism.  The Iran nuclear pact announced in Vienna on July 14th was virtually shredded ten days later on July 24th with Gen. Soleimani’s arrival in Moscow. His visit to finalize arrangements for Russian weapons deliveries was in defiance of not only his travel bans but also UNSC Resolution 1929 banning purchase of conventional weapons and missile technology five years ahead of its sunset under the Iran nuclear pact.