While we are busy fixating on the ‘travel ban’ and the refugee moratorium, Trump’s Department of Homeland Security has begun to find those illegal alien parents who paid smugglers to get their children to the US border where they then became wards of the federal Office of Refugee Resettlement (in HHS). Many of the ‘children’ were subsequently turned over to their parents.  (The largest percentage of ‘children’ were teenage boys!)

ICE is finding the parents!

That should cool the Unaccompanied Alien Children (UAC) run on the border, and save US taxpayers a bundle!

The cost of managing the UACs within ORR has been the largest part of ORR’s budget for the last few years.

A couple of our usual suspects, refugee contractors, also make a bundle from their involvement with the ‘children.’  The US Conference of Catholic Bishops and Lutheran Immigration and Refugee Service (and possibly others) benefit financially from the illegal alien kids.

From the Charlotte Observer:

The Trump administration has begun a new surge of immigration enforcement targeting parents who have paid to have their children illegally brought to the United States.

The recent arrests, which had been largely rumored but not confirmed until now, have set off a new wave of confusion and fear through immigrant communities that have already been subject to greater enforcement.

U.S. Customs and Border Protection agents have begun sharing information with immigration agents about U.S.-based relatives of unaccompanied children. The information is being used to track down the parents, according to lawyers and government case workers familiar with the practice.

“The kids are basically being used as bait at this point,” said a field specialist with the Office of Refugee Resettlement, the federal agency that takes custody and shelters unaccompanied immigrant children.

U.S. Immigration and Customs Enforcement officials confirmed Thursday that they have begun a new enforcement initiative to “disrupt and dismantle” human-smuggling facilitators, including arresting the sponsors who have paid criminal organizations to smuggle children into the United States. They did not say what charges were being applied.

“ICE aims to disrupt and dismantle end-to-end the illicit pathways used by transnational criminal organizations and human smuggling facilitators,” said Jennifer Elzea, deputy press secretary for the U.S. Immigration and Customs Enforcement. “As such, we are currently conducting a surge initiative focused on the identification and arrest of individuals involved in illicit human smuggling operations, to include sponsors who have paid criminal organizations to smuggle children into the United States.”

Immigration officials cited Office of Refugee Resettlement statistics on Thursday that show approximately 90 percent of all unaccompanied children encountered at the southwest border are eventually turned over to a family member residing in the United States.

In February, Department of Homeland Security Secretary John Kelly issued new orders to agency heads that would considerably expand the number of immigrants who could be detained and deported.

One of the memos said 155,000 unaccompanied children have been detained in the past three years.

There is a very informative report, here, put out by the Congressional Research Service on the Unaccompanied Alien Children problem.  I thought this graph was useful.  It shows the number of UACs and how many are turned over to the Office of Refugee Resettlement (although they are NOT refugees).

Note the enormous jump in numbers as the Obama Administration signaled that it would turn a blind-eye to the invasion of the ‘children.’

“…an authentic immigrant invasion” is underway, as record breaking number of migrants make it to Italy in two days 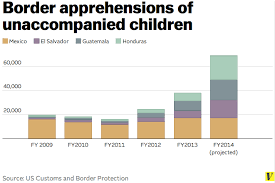