In spite of a new voter-approved term limits law that was approved by nearly 80 percent of the vote, 4-term incumbent Vice Mayor David Levy is running for his fifth consecutive election to the Palm Beach Gardens City Council. The 2014 law, which is retroactive, limits council members to two consecutive elections to the council. 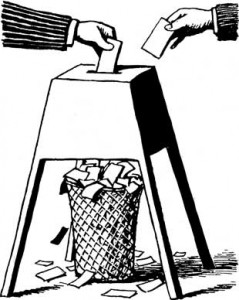 Shredding the will of the people.

City cronies are circling the wagons for Levy, as his city attorney and city clerk, Patricia Snider, are arguing Levy can place his name on the ballot in spite of the new law. Palm Beach County Supervisor of Elections Susan Bucher is permitting Levy’s name to appear, saying it is up to the municipality — that is, Snider — to enforce its own election laws.

Levy’s defense to irate voters is even more brazen. He is reportedly replying that if the voters don’t like his illegal candidacy, he won’t be able to win re-election.

In other words, the results of the 2014 elections didn’t count and he is entitled to a do-over — with different voters!

This is one key reason why municipal term limits are so important. Incumbents can turn out the vote of self-interested special interests in their districts and win repeated, lopsided elections as the bulk of the citizenry are busy taking care of their own lives, families and businesses. It is a classic case of the phenomenon of concentrated benefits and dispersed costs.

Levy’s calculation — based on the pre-term limits math of automatic victory — is that even though law-abiding citizens won’t like it, he’ll win anyway. So, to hell with the voters. They probably won’t even hear about the fraud until it is too late, if ever.

Send her an email by clicking here. Thanks!