The USSA and her subsidiary, the United Socialist Kingdom, have formed a new state in territory formerly held by the reactionary imperialist regime of Syria, which will henceforth be known as the Islamic Socialist Republic of Kidnapistan.

Once the Jihadi Salafists were categorized as a minority group in Syria, they immediately became eligible for special protection, similar to what the Party and the State extend to minority groups at home. It was decided, therefore, that in the interest of the unity of the word proletariat, the workers and peasants of the Sunni Islamic Fundamentalist minority are entitled to a redistributive state of their own. 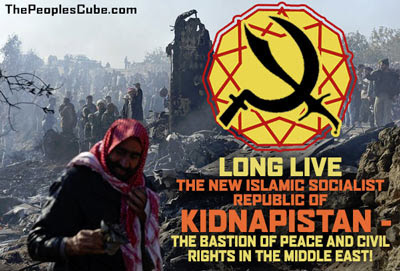 The Supreme Council for International Peace and Security has allocated funding and military assistance to this fledgling peace-loving entity in the Middle East, which will soon outshine all other nations in the region in its commitment to equality and redistributive justice, while maintaining its unique Islamic identity.

It is unclear at this time whether the USSA will assist the soon-to-be-formed government of Kidnapistan in religious cleansing and deportations of the non-Jihadist, non-minority current residents who are not in full compliance with this territory’s new status.

However, the Party has been assured by Comrade John McCain that non-Salafist elements in the area will continue to be shown the same courtesy and kindness that Syria’s progressive Jihadist minority has been long known for.