These days there aren’t too many big pro-family victories to celebrate. But Sunday’s St. Patrick’s Day Parade in South Boston was one of them!

It went wonderfully. The organizers stood up to the politicians and the rabid media who tried relentlessly to force them to include overt homosexual activist groups in their traditional Catholic, pro-family parade. 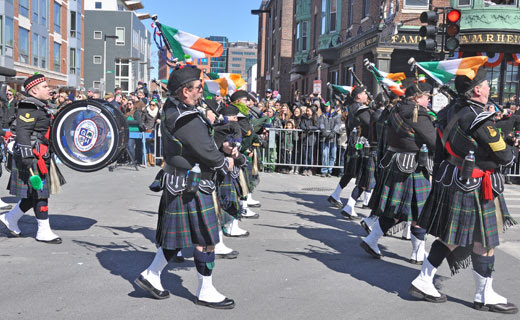 All photos courtesy of MassResistance

And in the end many others stood with them. Labor unions, small businesses, several politicians, and an almost endless procession of military, religious, school, and other groups proudly marched before huge, cheering crowds. But it was a nasty fight right up to the end. And the organizers personally thanked MassResistance for our support.

As we reported last week, the parade organizers had been pressured for over a month, and recently their sponsors were even contacted. As of last week, all of the major sponsors and politicians had announced they were boycotting the parade in solidarity with the homosexual groups according to statements that were released.

The vicious intimidation tactics lasted right up to the morning of the parade.

Many people don’t realize how enormous the Boston St. Patrick’s Day Parade is. This year the parade was nearly two hours long. There were groups marching from as far away as Florida. It typically attracts over ¾ million people, and this year there were at least that many.

It is not only a pro-family Catholic event but also a military celebration.Organized by the South Boston Allied War Veterans Council, the parade celebrates Evacuation Day, the day the British were driven out of Boston during the Revolutionary War in 1776, which, like St. Patrick’s Day, is also March 17. Thus it includes dozens of US military contingents and veterans groups of all types. 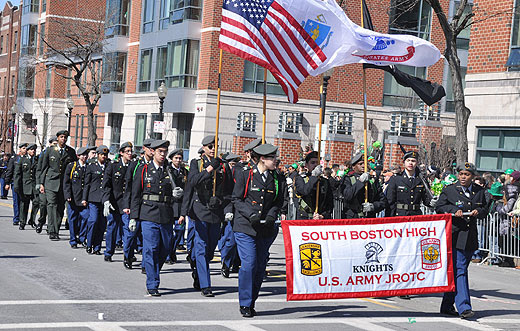 The religious, festive, historical, and military aspects of the parade give it a special old-fashioned atmosphere that attracts families from all over New England.

The organizers simply don’t want to mix in the “gay pride parade” element. One need only look at photos from any “gay pride” parade (here or elsewhere) to see what you can eventually expect to have. But the politicians and the media decided that this year they would not take “no” for an answer.

During the weeks leading up to day of the parade, virtually all of the newspaper coverage focused on the exclusions of the homosexual activists. The Boston Globewas particularly relentless.

It went to some absurd extremes. At one point, the Globe surprised us by printing a strong letter by a Catholic school principal supporting the parade organizers. Then a few days later they published an editorial personally attacking the principal’s Catholic religious views, and of course, letters attacking him also.

The morning of the parade, the Globe’s only “parade news” was a full-page article(that began on Page 1) about two homosexual activists putting “rainbow” colors on one of the floats for the parade, in an effort to sneak in the homosexual message.

Also on the morning of the parade — not to be outdone — the Boston Herald’s columnist Margery Eagan, a tireless anti-Catholic, wrote a particularly venomous article naming and celebrating the sponsors who had dropped out of this “toxic parade.” In the article, Eagan admitted that the businesses were contacted “by the Boston Herald” to intimidate them and inform them that their names would be in the newspaper. Note to the Herald: For a newspaper that depends on advertisers for its livelihood, it’s would seem to be a rather unwise practice to harass someone’s advertisers.

It gets ugly: Mayor of Boston screams & curses at parade organizer

Newly elected Boston Mayor Marty Walsh, a longtime pro-homosexual advocate, put enormous effort to force, harass, and coerce the parade organizers to buckle under and let open homosexual activist floats and banners into the parade. But the organizers stood behind the 1995 US Supreme Court ruling that allows them to include or exclude anyone they choose.

The Friday night before the parade it got ugly. Mayor Walsh and parade organizer Philip Wuschke, Jr. were both on stage at the South Boston Citizens Association. According to an eyewitness we spoke to, Walsh approached Wuschke and began berating him. Walsh told him he’d better agree to include the homosexuals. When Wuschke said no, Mayor went up to his face and screamed “You’d better not f— me over on this. Do you hear me? Don’t f— with me.” And the Mayor continued a profanity laden diatribe until someone stepped in and separated them.

Walsh is a former union organizer and local union president and is probably used to getting his way. But Wuschke is also a union member, and had no trouble telling the Mayor what he could do with his threats.

Violation of 1995 US Supreme Court ruling

This kind of tactic by the Mayor is an obvious violation of the 1995 US Supreme Court ruling. It gave the parade organizers the First Amendment right to decide whom to allow in the parade. In the last paragraph, the Justices also stated that the State may not use its power to coerce them:

“Our holding today rests not on any particular view about the Council’s message but on the Nation’s commitment to protect freedom of speech. Disapproval of a private speaker’s statement does not legitimize use of the Commonwealth’s power to compel the speaker to alter the message by including one more acceptable to others.”

But Walsh apparently has no interest in that. According to a witness at one of the Mayor’s “negotiation” sessions between the parade organizers and the homosexual activists held earlier, the Mayor of Boston remarked, “I don’t give a sh– about the Supreme Court ruling that was 20 years ago.”

On Saturday morning Walsh told the press that he would keep pushing right up until the parade started. In fact, Wuschke and others were getting so many harassing phone calls from the Mayor’s people on Saturday that they had to turn off their cell phones.

Not surprisingly, none of this ever made it to the mainstream media in Boston.

The parade goes on!

Sunday was a chilly but very sunny day. The streets were already crowded an hour before it started. Everyone was excited. The parade began right on time! 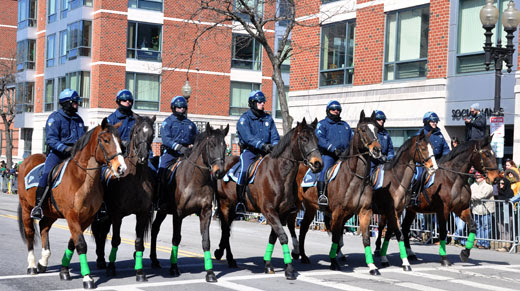 The parade began with the City of Boston Police Department riding horses with green socks!

It had seemed that no prominent politician would march in the parade and risk the wrath of the homosexual lobby. But there was a LOT of outrage by local citizens over that, especially directed at politicians in South Boston. And apparently that made a big difference!

Labor unions were a noticeable presence in this year’s parade. Mayor Marty Walsh has deep labor roots in Boston. It was the unions that got him elected. It’s pretty clear he didn’t want them marching that day. But a principle was at stake — and some of the most powerful unions in the city made it a point to be in the parade.

Also well represented at the parade were the Teamsters union and thePipefitters union, among others.

The big “pro-gay” corporations may have pulled out. But local businesses stayed in the parade, and at least one national company, H&R Block, had a float.

On Monday the parade organizers called the MassResistance office to thank us for our efforts last week getting the truth out — and helping people across the country come to their aid. In fact, people all over America — as far away as Hawaii — called and emailed their outrage to the politicians and cowardly advertisers and their support for the parade organizers. So we say: THANK YOU to all of YOU!

There is something profoundly wrong and un-American about presuming to dictate who one must include in one’s private parade. The US Supreme Court understood this by a vote of 9-0. But the Left ignores that, and strives to create a climate of fear and confusion in order to get their way.

As the Globe reported:

The Catholic Action League issued a statement after the parade congratulating the parade organizers “for their determined defense of their Faith, moral principles, and constitutional rights.”

“The homosexual group which tried to force its way into the parade cared nothing for Saint Patrick or Irish culture, and had nothing but contempt for the Catholic religion. MassEquality wanted to use the parade to promote its own agenda,” the League said in a statement.

In a statement issued this morning, Walsh drew parallels between the fight for lesbian, gay, bisexual, and transgender equality and earlier battles for liberty.

The parade organizers deserve everyone’s thanks for standing up to the “LGBT” juggernaut and the vicious intimidation by the politicians and the liberal press. How many people these days are willing to do that?

The willingness of the Left to create disinformation never ceases to amaze us.

The organizers allowed two local non-profit “diversity” groups to march. Both had agreed to the rules regarding homosexual labels and signs. Nevertheless, both floats put on some rainbow-like decorations and told the Globe and Heraldbeforehand. Beyond both contingents were fairly non-descript and uninteresting. 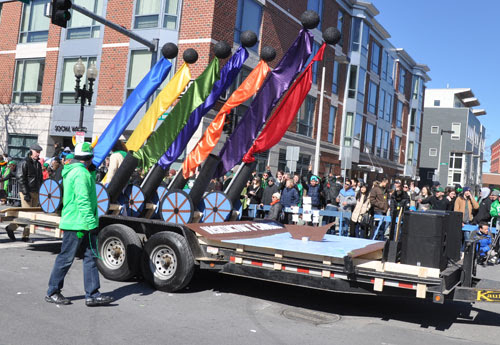 This was the  so-called “diversity float” with wooden cannons decorated in different colors, supposedly representing the “rainbow.” Most people had no idea what it was all about. But the Boston media swooned over it.

As the float passed by in the parade (according to our observation and others we spoke with) almost no one seemed to know what it represented.

This was the other “diversity” non-profit group. They had a banner that looked like the “pot of gold at the end of the rainbow” and other banners talking about “inclusion.” This was somehow supposed to signify “gay rights.” Most people didn’t seem to get it.

But the obsessed media treated them like the stars of the parade. These floats were the only ones pictured in the Globe and the Herald’s print coverage the next morning. Both papers claimed (falsely) that the groups “warmly” received by the crowd. Tuesday’s Globe even had featured a ridiculously distorted lead editorial  celebrating the pathetic float as though it were kind of great “progress.”

The Boston media almost completely ignored the wonderful totality of the South Boston St. Patrick’s Day Parade. It was shameful, but unfortunately something we’ve all grown used to.

CONTACT the companies that boycotted after signing on as sponsors!

Luckily, all of the sponsorship money had already been paid, and none of it was refunded! But their public solidarity with the radical homosexual activists over pro-family Catholics was extremely offensive to people everywhere.

We’ve been contacted by people across the country about getting local bars to stop serving Samuel Adams beer over this! Many remember last summer when a  Samuel Adams commercial quoting the Declaration of Independence left out the reference to God because, they later claimed, it might violate the beer industry advertising standards.

Samuel Adams Beer
Also known as “Boston Beer Co.”
Samuel Adams was fairly open about their boycott of the parade in solidarity of the homosexual movement.
Inquires/Complaints: 888-661-2337
Direct: 617-584-1175 ask for “Jennifer”
Contact form

The Westin Boston Waterfront Hotel
Michael Jorgensen, manager 617-532-4840
Contact: donna.frechette@westin.com
They claimed that they “were never sponsors.” That is untrue. They have given money to the parade for the last several years.

New England Coffee Company
Pulled out as a sponsor
1-800-225-3537
consumerrelations@necoffeeco.com

(Note: We had earlier included Gillette in this list. It turns out that Gillette had never been an “official” sponsor, but had simply allowed the use of their parking lot for the parade stating area.)