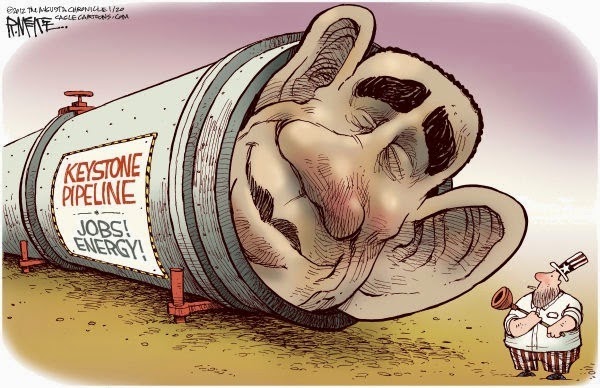 The delay of the Keystone XL pipeline is a perfect example of the way President Obama and his administration has engaged in, not just a war on coal, but on all forms of energy the nation has and needs. Even his State Department admits there is no reason to refuse its construction and, as turmoil affects the Middle East, there is an increased need to tap our own oil and welcome Canada’s.

The latest news, however, is that Canada has just approved the Enbridge Northern Gateway Project, a major pipeline to ship Canadian oil—to Asia.

The pure evil of the delay is compounded by the loss of the many jobs the pipeline—that will not require taxpayer funding—represents to help reduce the nation’s obscene rate of unemployment and to generate new revenue for the nation. That’s what oil, coal, and natural gas does.

Less visible has been the out-of-control Environmental Protection Agency that has, since Obama took office on January 20, 2009, issued 2,827 new final regulations totally 24,915,000 words to fill 24,915 pages of the Federal Register. As a CNSnews article reported, “The Obama EPA regulations have 22 times as many words as the entire Harry Potter series which includes seven books with 1,084,170 words.” Every one of the EPA regulations affects some aspect of life in America, crushing economic development in every conceivable way.

Citing a study by the U.S. Chamber of Commerce, Delingpole reported that the new regulations will cost the economy another $51 billion annually, result in the 224,000 more lost jobs every year, and cost every American household $3,400 per year in higher prices for energy, food, and other necessities.”

This is an all-out attack on industry, business, and the use of electricity by all Americans.

There is absolutely no reason, nor need to reduce “greenhouse gas” emissions, particularly carbon dioxide (CO2), a gas on which all life on Earth depends because it is to vegetation what oxygen is to all living creatures. It is the “food” on which every blade of grass depends. More CO2 means more crops and healthier forests.

The EPA’s regulations would yield“Less than two one-hundredths of a degree Celsius by the year 2100.

Disastrously, even the Supreme Court—the same one that signed off on Obamacare as a tax—has not ruled against the EPA’s false assertions about CO2. In late June, however, it did place limits on the EPA’s effort to limit power plant and factory emissions blamed for a global warming that does not exist. The Earth has been cooling for seventeen years, but the Court ruled that the EPA lacked authority in some cases to force companies to evaluate ways to reduce CO2 emissions.

As Craig Rucker, the Executive Director of the free market think tank, CFACT, points out, “The Court served notice that the Executive Branch cannot unilaterally write its own laws. This is an important principle. However, the United States still remains fated to suffer most of the economic damage EPA’s regulations will cause. True reform will require congressional action.”

The attacks on the energy industries by environmental organizations have been attacks on all Americans who turn on the lights or drive anywhere. Their mantra has been “dirty coal” and “dirty oil” along with lies about the way energy industries contribute billions to the nation’s revenue in taxes.

An example of these attacks have been those directed against “fracking”, the short term for hydraulic fracturing, a technology that has been in use for more than a half century and whose development has generated a boom in natural gas these days. Claims about fracking pollution have no basis in fact.

A new book, “The Fracking Truth—America’s Energy Revolution: The Inside, Untold Story”, by Chris Faulkner is well worth reading for the extraordinary way he explains fracking and the facts he provides about energy in America. It is published by Platform Press.

America has huge reserves of coal, oil and natural gas. “This phenomenon of energy abundance and efficiency,” says Faulkner, “makes it almost a certainty that the cost of powering our nation—already a bargain by international standards—is going to become even less of a burden for our economy for many decades to come.” But not if the EPA and other Obama government agencies such as the Department of the Interior have their way.

One example: “According to the American Petroleum Institute, at least 87% of our federal offshore acreage is off-limits to drilling. API commissioned the consultancy Wood Mackenzie to assess the foregone offshore opportunity in specific terms. The upshot: Increased access to oil and gas reserves underlying federal waters could, by 2025, generate an additional 4 million barrels of oil equivalent per day, add $150 billion to government revenues, and create 530,00 jobs.”

Who is the enemy of energy, current and future, in the United States? Barack Obama.