The artistic value of new Russian propaganda is way below its glorious Soviet predecessor, but the paranoid, attack-dog mentality remains the same.

According to Gazeta.ru, last Friday, at the “Flakon” art factory in Moscow, a pro-Putin group of nationalist youth called “Young Guard” together with the “patriotic artists and well-known graphic designers” organized an exhibition of over 100 political cartoons glorifying the policies of President Vladimir Putin and demonizing his opponents. The politically “correct” organizers must have been too dead-serious about their sycophancy to notice the grotesque irony of the event’s title, “Without Filters.”

Forget the filters. The exhibited artists had to be wearing blindfolds not to notice the dangerous cusp to which the current Russia’s regime has taken the country by whipping the nationalistic fervor, xenophobia, and paranoia. They have portrayed Putin as a hero, a winner, and savior of the nation at a time when Russia’s ruble is crumbling, the country’s international standing has hit a new low, and the falling oil prices threaten to knock out Russia’s oil-oriented economy, which Putin had a chance to diversify, but didn’t.

Instead, the Russian president is shown as a winner who knocks out a bloodied man resembling Vitali Klitschko – a heavyweight boxing world champion from Ukraine, who became a politician leading his own country towards independence.

Another drawing pictures Putin on top of a tank, addressing two peasant girls to ask if they had seen any fascists around. The girls have the faces of Barack Obama and Ukraine’s president Petro Poroshenko, whom the artist apparently considers to be “fascists” and who had disguised themselves out of fear of being caught.

The event organizer, “Young Guard,” is to Vladimir Putin’s puppet political party “United Russia” what the Soviet Young Communist League was to the Communist Party of the Soviet Union. Not coincidentally, it is named after a glorified, if mostly fictional, underground militia group who fought the Nazis on the occupied territories during WWII. Decades after the Nazis had been defeated, the Soviet and now Russian government have continued to steep generations of young people in the same Stalinist war-time mythology – keeping alive the memory, the hatred, and the eagerness to throw themselves under the tanks and die defending the Motherland against the fascists.

When your only tool is a hammer, everything looks like a nail. Similarly, just about every opponent of the regime has become a fascist. Putin only needs to point a finger. Today, his finger is pointing at Ukraine – and thus the fascists and the Nazis are now all those Ukrainians, from politicians to common citizens, who want to join the West and are defending their country against Russia’s aggression.

Putin’s finger is further pointing to the United States and other Western countries that oppose Putin’s corrupt regime and his militaristic policies. Hence the self-righteous anti-American, anti-Western, and “anti-fascist” hysteria that is sweeping today’s Russia, causing many, including famous actors and writers, to come out with shrill anti-Western rhetoric. Some of them go as far as travel to the “historic Russian territories” controlled by the puppet pro-Russian “separatists” and shoot some Ukrainians.

Once again, they are so dead-serious about their “anti-fascist” delusion that they fail to notice it’s their own rhetoric and their own actions that quite accurately resemble the rhetoric and the actions of the German Nazis on the brink of WWII, complete with militant nationalism, cult of the strong leader, resurrection of Aryan mythology, and popular support for Hitler’s annexation of “historic German territories” in France, Poland, and Czechoslovakia.

The “patriotic” exhibition in question is a fair reflection of such a mindset – from glorification of blood and violence to fascistic symbolism and dehumanization of the opponent to conspiracy theories and the supremacy of Russia “uber alles.”

Quite a few pictures ridicule Barack Obama, who is being spanked, pulled by the ear, and even has a barrel of a gun stuck in his bloodied face by Vladimir Putin. In one such poster, Putin and Obama are watering a tree. On Putin’s side the tree is green, while on the U.S. President’s side it’s dead, with human skulls showing through the roots. Without defending Obama’s policies, it would be fair to say that in this metaphor Putin’s side of the tree would really be on fire.

There is a picture where Putin hands out a saw and a log to the leaders of Germany and Ukraine, as a way of saying that their countries may have to heat their homes with firewood this winter because Putin has the power to turn off the supply of Russia’s gas. The writing on the saw says, “From Russia with love,” but it might as well be “Who’s your daddy?”

One image depicts Putin as the owner of the Crimea, inviting world leaders to have a pleasant visit. Another one shows world leaders holding signs saying, “Forgive us, Putin,” with only the leaders of the U.S., Germany, and Poland talking about sanctions.

At least in two cartoons Putin is pulling Obama’s ear. In another, Putin is holding up a cell phone for a selfie, with a defeated Obama behind him. An objective observer might conclude that the Russian leader is just as vain as Obama, but in the eyes of the artist that’s obviously a merit. There is a cartoon showing a bare-chested Putin riding a bear with an owl on his shoulder, next to Obama who is riding a donkey, with the American eagle sitting on his head.

There is also a collection of macho images of Vladimir Putin on a wall behind Barack Obama, who is sitting with crossed fingers, hoping those images had been Photoshopped. Of course, the whole world knows that those are real photos – they had been carefully staged by professional art directors in a project that cost the Russian taxpayers a lot more money than mere computer graphics.

There are many other comparisons between Putin and Obama – mostly derivative, crude collages that blatantly steal brownie points from American Photoshoppers. Truth be told, in the past this author himself has made quite a few scathing images of Obama, including the unflattering comparisons of our president with Vladimir Putin. However, the fact that Americans are freely ridiculing their own president somehow escapes the “patriotic” Russian artists who promote Putin while depicting his critics as fascists and demons.

Whatever your views of the sitting American president, make no mistake: Barack Obama is not a factor here. This phenomenon would be happening regardless of who the U.S. president is. If it were Ted Cruz, they’d be making pictures of Putin spanking Ted Cruz. And instead of cleverly helping Republicans to ridicule Obama, the Kremlin’s propaganda would be just as cleverly helping the Democrats to ridicule Cruz. In 2016, Obama’s face will be simply replaced with that of whoever the next U.S. president will be, Republican or Democrat. And that would be the face reflected in Putin’s cool sunglasses in the poster where the Russian president is sticking a pistol barrel into the bloodied mouth of the American president.

In the not-so-distant Soviet past, graphic artists had neither freedom of expression, nor commercial outlets for their creativity. The only game in town left for those who had talent was to work for the state and to create visual propaganda that glorified the Party and its leaders, while demonizing the enemies. A few gifted artists went that route, producing unforgettable classics of the genre and brilliantly executing otherwise rotten concepts.

Things are different now. Even with the corrupt and oligarchic version of capitalism that exists in today’s Russia, gifted artists have a variety of commercial venues and a much greater freedom of expression – a situation in which they don’t have to sell out to the powers that be. You won’t see their names in this gallery. As a matter of fact, this collection represents the scrapings from the bottom of Russia’s artistic barrel.

And yet, in spite of its lack of artistic or intellectual insight, this “patriotic” exhibition it is a fair representation of the depraved state of mind of millions of zombified Putin’s supporters. The straw men they are fighting may be imaginary, but the paranoid worldview of Russia’s regime and the crowds behind it is a grim reality to be reckoned with.

See more complete slide shows on Russian websites here and here. These are only some samples: 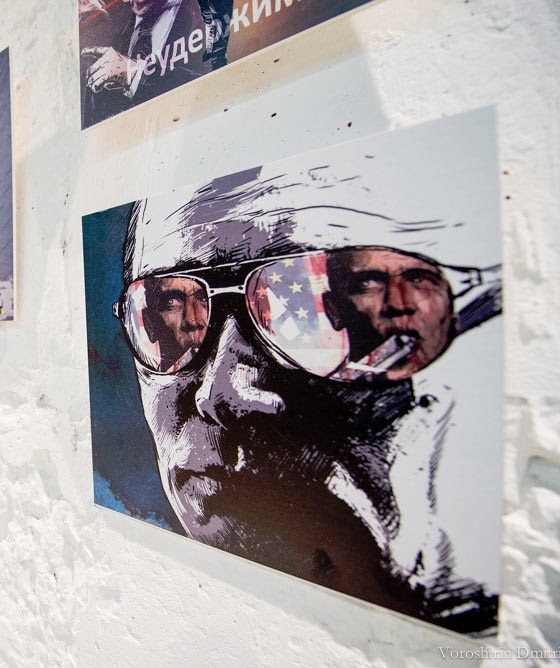 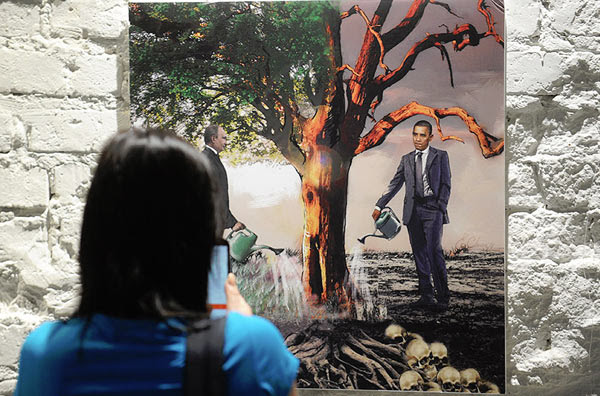 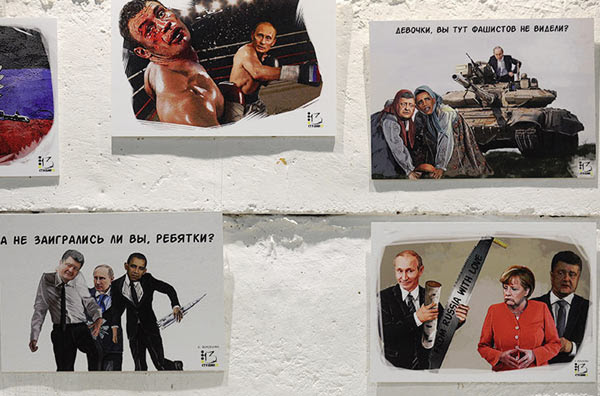 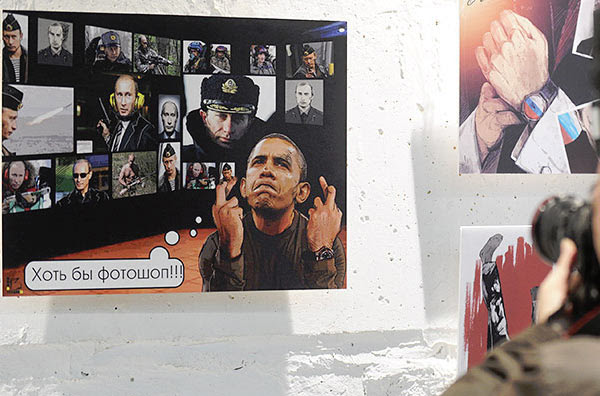 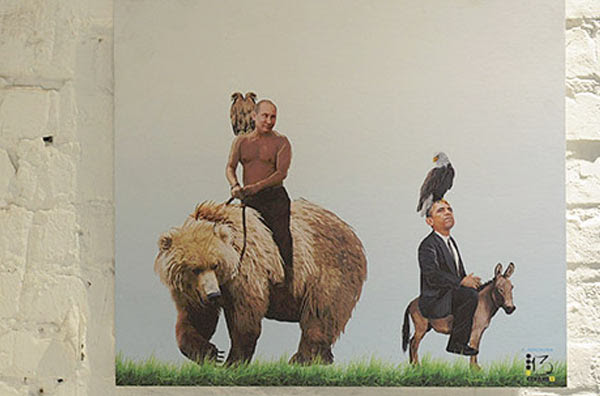 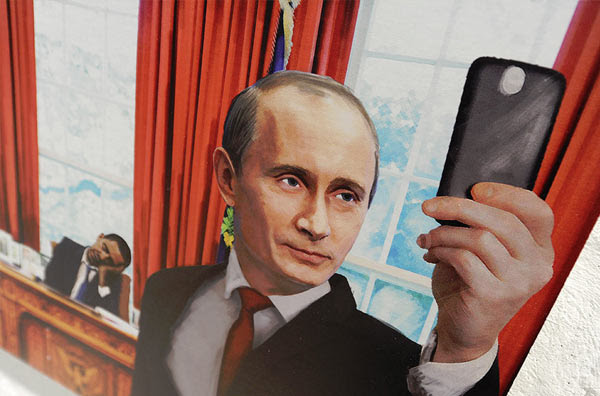