The Islamic Society of North America (ISNA) is holding a conference “to counteract different forms of extremism.”  It appears the extremism they are talking about is not the Jihadists of Islam that despise America and want to change its public policy.  The extremism that ISNA is referring to is the efforts by those who do not want Sharia law to have any place in American politics. Among those who have spoken out against ISNA is Dr. Zuhdi M. Jasser, Founder and President of the American Islamic Forum for Democracy.

Since 9/11 there have been over 21,000 deadly terrorist attacks conducted by Muslims, over 93,000 Syrians have died in a Sunni vs. Shia regional conflict, and sharia compliant Islamic regimes in Turkey and Egypt are clamping down on those petitioning their governments. The most recent Boston Bombing by two Muslim Americans adds to the growing distrust of shariah as both brothers were following its tenants while murdering fellow Americans. 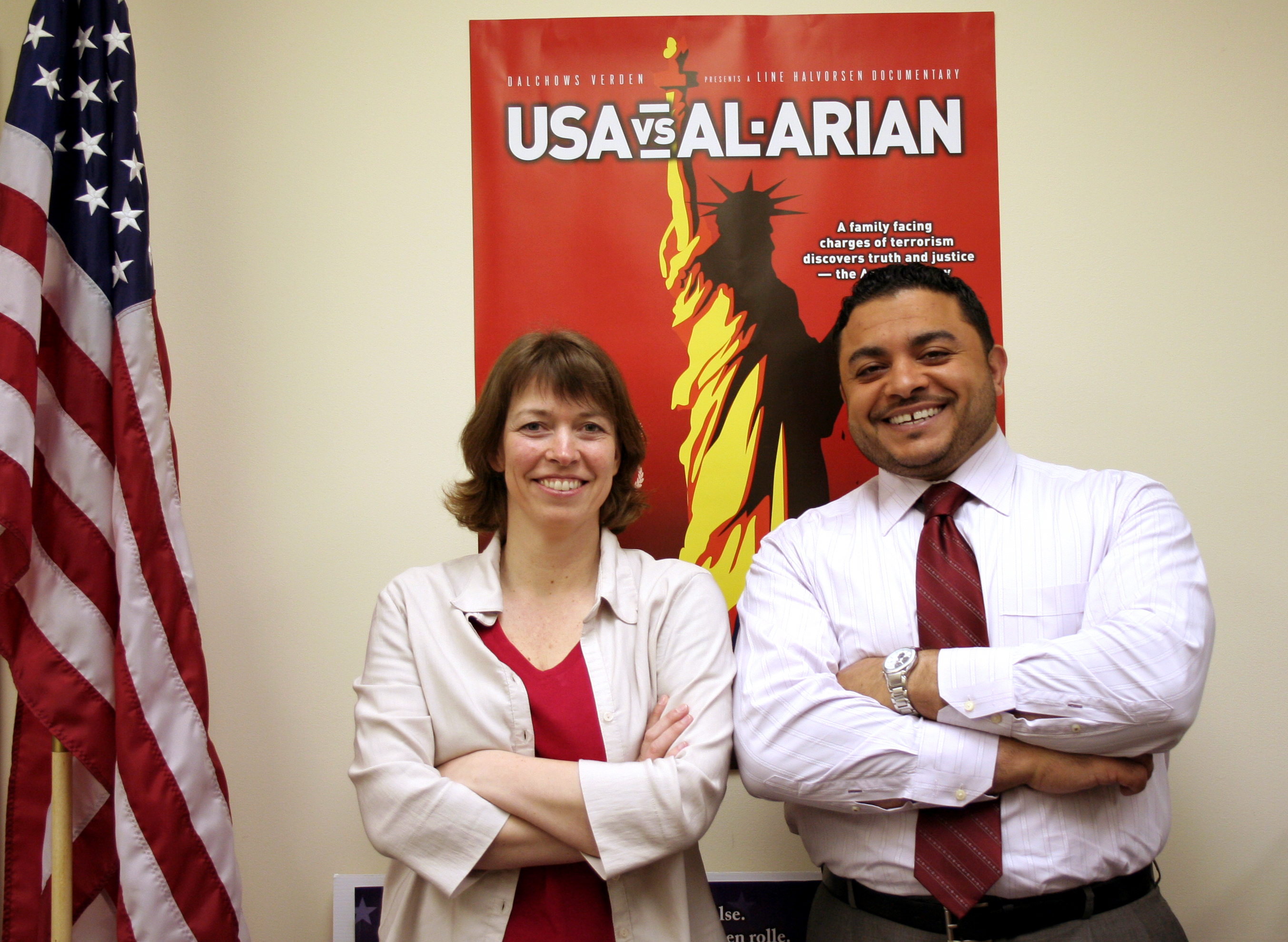 Ahmed Bedier (right) in front of poster supporting terrorist fundraiser Sami al-Arian. For a larger view click on the image.

Ahmed Bedier is a featured speaker at the ISNA conference in Tampa.  Ahmed Bedier:

ISNA founder and former Secretary-General Sayyid Syeed said in 2006, “Our job is to change the constitution of America.”  It is the Islamist mission to institute Sharia law as public policy in the United States.

The Clarion Project reported on May 30, 2013 in the article titled ISNA Redefines “Shari’a” for Western Consumption. The latest issue of the Islamic Horizons magazine of the Islamic Society of North America, a U.S. Muslim Brotherhood entity, has an article with this message:

The U.S could learn from Islamic law if it weren’t for the “Islamophobes” bashing Sharia.  The theme of the article is that “Islamophobes” are twisting the meaning of Sharia, and it is up to Muslim-Americans to set the record straight.

Some provisions of Sharia law are antithetical to the rights and liberties afforded under Article 6 of the United States Constitution, which states the US Constitution is the “supreme law of the land”. Under Sharia law the Quran supersedes any other laws, meaning the Constitution must conform to the Quran. Shariah requires the establishment of a single religion – Islam.

The event is from 3:00 PM – 10:30 PM at the Sheraton Tampa East (10221 Princess Palm Avenue). In light of recent events and frequent misconceptions about Muslims, the theme “The American Muslim Identity: Challenges to Opportunities” will focus on addressing the difficulties Muslims face and discussing practical and positive solutions to counteract different forms of extremism.

Note 1.  Ahmed Bedier is President of United Voices for America.  The top issue at Unitedvoices.com is opposing federal legislation to prohibit American courts from recognizing Sharia law.  The headline issue on this web site states “If passed, this legislation will be disastrous…”  Click here to read top article titled “UV Policy Brief: Should Sharia Law Be Banned in America?” at United Voices for America.

Note 2.  “Ahmed Bedier, Tampa spokesman for the Council on American Islamic Relations, said Moffitt was wrong about the Al-Arian plea. Al-Arian did not agree to admit to any charges associated with terrorism, Bedier said.

“He stayed true to his convictions – he stayed true he wasn’t going to plead to those issues,” Bedier said. “There is no conspiracy to support terrorism.”

Bedier said he could not reveal what charge Al-Arian agreed to, and he refused to reveal the source of his information.

Bedier convened a 7 p.m. news conference, saying he hoped to have Al-Arian’s family there. They did not appear.

“Their lawyer would not allow them,” Bedier said. He later said Al-Arian’s family learned of the plea agreement Friday from a news report.

All of the above statements were reported by The Tampa Tribune on April 15, 2006.

Note 3.  “We have faith in the American judicial system,” said Ahmed Bedier, executive director of the Tampa chapter of the Council on American Islamic Relations. “So far we’ve only heard and read about vague language describing an explosive device, but no actual evidence. Until that’s displayed it’s going to be unclear what’s going on.”

The above statements were reported by the Tampa Tribune on September 1, 2007.

Note 4:  CAIR (Council on American-Islamic Relations) lead then by Ahmed Bedier placed intense pressure on the Hillsborough County School Board to include the Muslim day Eid Al-Fitr in the 2006-07 school year calendar.  The school board responded to CAIR’s pressure by removing Good Friday and Yom Kippur from the school calendar.