Despite severe weather conditions, the plan to topple Lenin statues in Ukraine has been successfully completed this month, ahead of schedule. The government of the former Soviet republic is happy to report that the quota of toppling monuments to Vladimir Lenin and other communist leaders has been met and in some places exceeded, with toppling of a number of unrelated statues in the process, as well as ransacking headquarters of the local Communist Party in Kiev.

Although many critics warned that the goal was unrealistic, irrational, and even mathematically impossible, the toppling of statues of the creator of the world’s largest planned economy still went ahead as scheduled, paced over the course of several Five-Year Plans, starting in 1991.

However, not everything went according to the Planning Committee’s projections. The first Five-Year Plan revealed a drastic shortage of ropes to pull the statues down, and of gasoline to power the moving machinery. 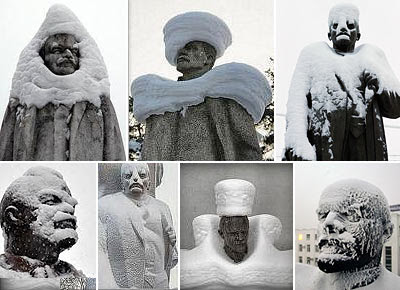 The second Five-Year Plan was plagued by continuously bad weather, consisting of five hot summers and as many cold winters, with uncharacteristically wet rains in between, presumably the result of climate change caused by a disproportional use of fossil fuels in the United States.

During the third Five-Year Plan all work was put on hold by the newly created Local 11 Statue Toppler Union.

The union leadership demanded an increase in wages and benefits in addition to a restraining order prohibiting all non-unionized persons from approaching any Lenin statue within a 200 foot radius. 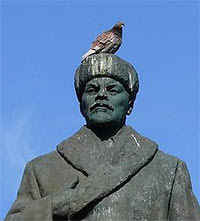 The fourth Five-Year Plan was beleaguered by a nationwide strike and a media campaign on behalf of Local 12 Pigeon-Handlers Union, whose members feared permanent unemployment and demanded a fair treatment with guarantees of lifetime salaries and benefits should all Lenin statues be toppled and outsourced to Third World countries.

The number of Lenin statues in existence also appeared to have been grossly underestimated, factoring only statues with the iconic beard and omitting those representing the father of the socialist revolution in his teens or prepubescent years, prior to the development of Lenin’s facial hair follicles. Neither did the plan account for the number of Lenin’s busts, bas reliefs, and mosaics, as well as semi-professional carvings and drawings on the walls of public restrooms.

No Lenin statues made of stone were ever toppled either, which was later blamed on the Planning Committee typist who mistook the word “stone” for “scone.” Amazingly, as many as twelve “scone” statues had been reported as processed and billed by government contractors.

A subsequent audit discovered instances where money was paid for the toppling of Lenin statues that never existed, or where the statues had been made on the spot out of snow or cardboard and then pulled by a bulldozer. In other cases funds were disbursed where no actual topplings occurred.

As a result, while the number of all reported topplings exceeded the initial projection, a visual observation by the auditors led them to conclude that nearly all Lenin statues still remained exactly where they had been placed by the erstwhile Soviet government.

At the time, Ukrainian president Viktor Yanukovich clarified the situation as follows: “More than twenty years of heroic and selfless struggle by our government to topple Lenin statues have exhausted the national budget and forced us to request a bailout from either the European Union or the neighboring Russia. Given that Moscow has more expertise than Brussels in toppling Lenin statues, we chose to side with a partner who better suits our historic needs.”

In a final speech to the nation delivered from the steps of a charter plane Mr. Yanukovich stated: “Rather than burdening our economy with this pointless toppling, I should have followed the Russian model and granted myself exclusive powers to build more palatial mansions in every struggling region of the country. Now if you’ll excuse me, my baggage and I have a flight to catch.” 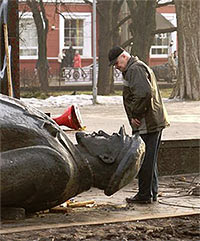 Inspired by the president’s farewell address, citizens of Ukraine enthusiastically poured into the streets, toppling Lenin statues completely free of charge, without troubling the overworked authorities and union contractors with requests to plan and coordinate their activities. After only several hours of work, volunteers around Ukraine were able to topple all of the remaining Lenin statues.

The next morning, as various government officials looked out their windows and didn’t see the familiar Lenin statues, they immediately knew that it was time to report a successful completion of the final Five-Year Plan, ahead of schedule and almost within the budget.