Why does government waste so much money? In so many ways? With such reckless abandon? 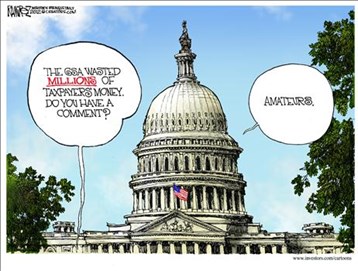 I suppose I could answer with mockery and say it’s because they have lots of experience squandering our tax dollars.

But let’s seriously contemplate that question and explore one of the reasons for waste. Simply stated, government programs are a magnet for scammers.

Example #1: Fraud is an inherent part of the big entitlement programs. Kevin Williamson has some unseemly details in an article for National Review.

…you know where there’s a lot of waste, fraud, and abuse? Social Security, Medicare, and Medicaid. …Medicare and Medicaid together account for about $1 trillion in federal spending annually, and estimates suggest that $1 out of ever $10 of that spending is fraud. Some estimates go much higher. We do not have a very good idea of exactly how extensive fraud in the system is, because the federal government has put a fair amount of effort into not knowing.

And what does that mean? How does the government try not to know?

…the government’s approach long has been backward…investigators are asking whether a certain treatment was in fact appropriate for what ails Mrs. Jones, not whether Mrs. Jones exists.

In other words, bureaucrats basically accept all claims as legitimate and simply judge from afar whether the right medical service is provided for the listed ailment.

Even if the ailment is fictional. Or the patient is fake.

As one might imagine, that kind of sloppy approach, combined with programs that dispense hundreds of billions of dollars, is a magnet for professional crooks.

It’s the work of organized crime. As Sparrow points out, when there is a criminal case filed against one of these fraud artists, then billing in a particular category – some years ago, it was HIV fusion treatments – falls off steeply, by as much as 90 percent. The implication here is that fraudulent billing may make up the majority of Medicaid and Medicare spending in some categories. …organized-crime syndicates are being permitted to use our medical entitlements to loot the Treasury, and that not very much is being done about that, which suggests the possibility – only a possibility – that there is political collusion in this at some level.

By the way, Kevin may be on to something when he speculates about collusion.

We already know about examples of politicians intervening to protect fraudsters 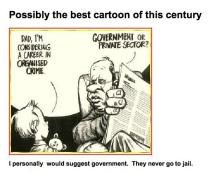 (who, conveniently, also happen to be campaign donors).

So is it really that much of a stretch to imagine them turning a blind eye (or worse) to industrial-level fraud by criminal enterprises?

Leads me to think this cartoon makes an unnecessary distinction.

Example #2: Welfare programs also are a magnet for fraud.

Here are excerpts from a recent news report.

Another six Lakewood, New Jersey couples were charged Wednesday with welfare fraud, bringing to 26 the number of people implicated since last week in the multimillion-dollar scandal. At the heart of the charges is the allegation that they all, in one way or another, failed to report or otherwise concealed significant income that would have made them ineligible for the assistance programs in which they enrolled. In total, state and federal prosecutors have said the families collected more than $2.4 million in benefits. …They allegedly obtained nearly $400,000 in Medicaid, food and heating benefits fraudulently. …Four other couples were arrested June 26 for allegedly defrauding public assistance programs of more than $1.3 million in benefits.

Welfare fraud must have been a major pastime for residents of the town.

Hundreds of these moochers are now trying to cover their tracks in hopes of avoiding legal trouble.

The specter of more charges has shaken Lakewood. Hundreds of residents have contacted authorities seeking amnesty or help avoiding arrest, the Asbury Park Press reported on June 29. In addition to the hundreds seeking amnesty, dozens more people have contacted social service agencies to cancel their benefits or declare income.

Example #3: And nobody should be surprised to learn that there’s plenty of fraud at the Pentagon.

The former owners of a Pittsburgh-area military supplier have been accused of defrauding the U.S. government of more than $6 million in defense contract work. …Prosecutors allege the Buckners inflated the cost of the work by falsifying invoices to make it appear as though they had spent $70 per window frame for the materials when in fact they had paid just $20 each for frames manufactured in China. The brothers are also alleged to have sold scrap aluminum collected in the manufacturing process without crediting that money to TACOM. The losses to TACOM are placed at $6,085,709 by the DOJ.

But that’s just the tip of the iceberg.

In 2014, a defense contractor responsible for providing food and water to troops in Afghanistan pleaded guilty to over-charging the U.S. government to the tune of $48 million. This week, two San Diego defense contractors pleaded guilty in a scheme that defrauded the Navy out of at least $1.4 million by over-billing for supplies that the military never ordered, the San Diego Union-Tribune reported. Similar stories have cropped up in Florida, California, Maryland, North Carolina and elsewhere in recent years, renewing calls for systemic reforms.

Maybe the reason fraud is so pervasive is that penalties are trivial or nonexistent.

A 2011 DOD report found hundreds of defense contractors that defrauded the U.S. military subsequently went on to receive more than $1.1 trillion in new Pentagon contracts between 2000 and 2010.

Or do these things not happen because the same folks are also campaign contributors?

I don’t know the answer to these questions, but surely something is amiss. It’s almost as if government is simply a racket for the benefit of insiders.

RELATED ARTICLE: As a Teen Cashier Seeing Food Stamp Use, I Changed My Mind About the Democrat Party