Canary Mission, a university campus watchdog that exposes hatred and anti-Semitism across the political spectrum, has been outrageously suspended from Twitter.

In the meantime, neo-Nazis, terrorist organizations and those dedicated to the destruction of Israel continue to operate freely. Among them, Hatem Bazian – a repeated offender of anti-Semitism, David Duke – former Grand Wizard of the Ku Klux Klan and even terror organization Hamas!

The Canary Mission Twitter account, by contrast, has been solely utilized to expose the social media posts and actions of those who spread hate.

The suspension of Canary Mission comes at a particularly sensitive time. In the wake of an overwhelmingly tragic school shooting, we face the the stark reality that social media posts must be taken seriously.

Our database contains hundreds of individuals who have shown support for or openly threatened violence on social media. In fact, many bigots and racists on our site have bragged about their ownership, ability and desire to use firearms.

We have also uncovered individuals studying or working in helping professions, who have posted a desire to injure or even kill Jews!

Exposing these potentially dangerous individual’s posts to the public, who then in turn report them to the authorities, has proven to be a vital tool. Last year, our tweet exposing apreschool teacher who had been spreading violent hatred against Jews, led to her swiftremoval from her position working with small children.

Despite this, Canary Mission according to Twitter, is violating their rule against “hateful conduct,” since we also call out white supremacists, Hamas supporters and anti-Israelactivists, many of whom praise Hitler, who then complain to Twitter that we are acting against them.

This claim is absolutely ludicrous. As clearly laid out in our About page, Canary Mission merely “gathers content from publicly available sources.” Anyone who complains about what Canary Mission said about them on Twitter needs to read the content of the tweet and face the hatred of in their own words. 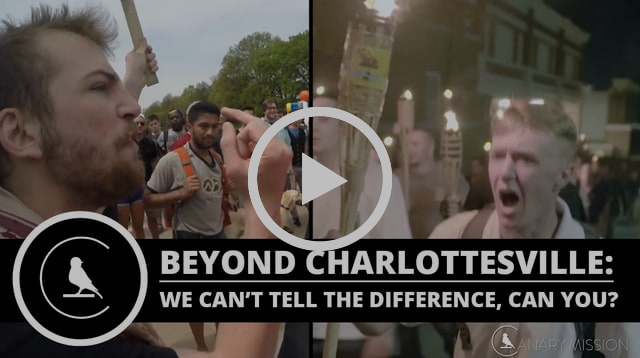 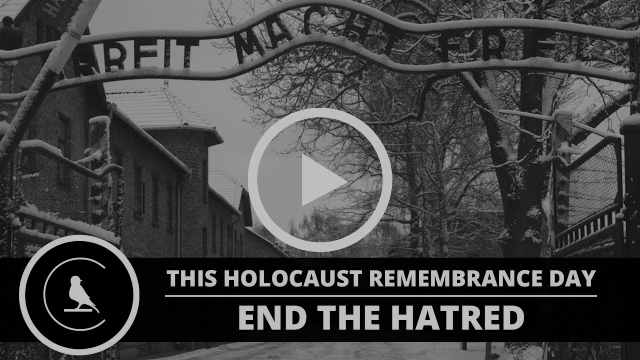 Hundreds of racists and bigots have taken to Twitter in order to celebrate. Various Twitterusers have even attempted to take the credit. Included in the celebrants was Jewish Voice for Peace (JVP) leader Ben Lorber, who expressed his joy in a Facebook with the tagline “Am Yisrael byeeeee.”

This is the true face of hatred. 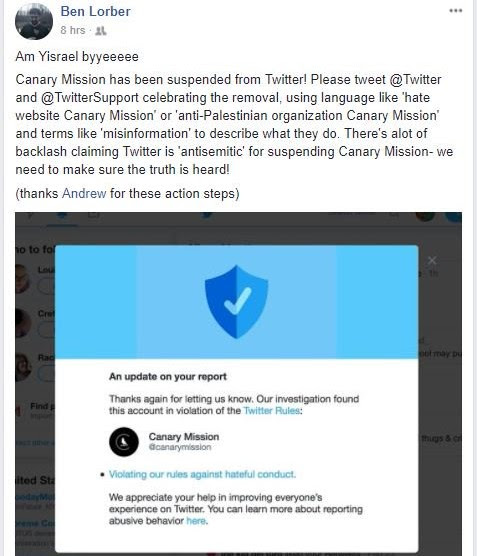 Much more significantly, we have received an outpouring of shock, concern and desire to help from our supporters across North America and from around the world. We have been inundated with emails and messages through our Facebook page by individuals looking to help. This is a true testament to the positive work we are doing. We are humbled and truly grateful to all those who have reached out to us. We are including an ACTION ALERT at the bottom of this email for specifically for all of you.

If the Canary Mission Twitter account is indeed permanently removed, then hatred has won a temporary victory. Whatever happens, our detractors should realize and our supporters can take to heart, that this will not change a single aspect of the work that Canary Mission does.

We will do our best to get our account reinstated and if not, our mission will not change, we will not falter. We will continue our mission to fight hatred and anti-Semitism.

“I am appalled that you have suspended the account of @canarymission, whose sole purpose is to expose hatred and bigotry! Their account is a vital service to the public, please reinstate it immediately. Thank you”