Below is a book cover I designed last month for Cliff Kincaid’s Back from the Dead: The Return of the Evil Empire written by him and three other authors. The book is now on Amazon. 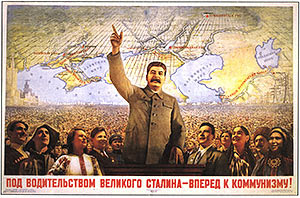 I modeled it on an iconic Stalin-era poster, changing Stalin to Putin and adding a peeling tri-color flag of the new Russia. The bad Soviet paint that had been hastily brushed over the old flag in the 1990s is now falling off in big clumps, revealing the solid red USSR flag with the hammer and sickle.

Putin is wearing a WWII-era St. Georgi ribbon on his chest, as do his murderous agents in the east of Ukraine today, falsely comparing their supremacist warfare on the independent Ukraine to WWII.

Since the old Evil Empire has now returned from its shallow grave, it is only appropriate that Putin would tower over a crowd of “undead” brainless followers. I had been tempted to sprinkle this gathering of zombies with the faces of modern Russian politicians and public figures, but they wouldn’t be recognizable in America anyway. The only face I couldn’t resist adding was that of Alexander Dugin (the bearded ghoul on the right), whose monstrous theories of Nazi-like national-chauvinism are fueling Russia’s modern supremacist movement, which Putin is so cleverly exploiting.

I got a complimentary copy of the book in today’s mail; it looks great and I can’t wait to read it. Here’s a synopsis from America’s Survival website.

A new book — Back from the Dead: The Return of the Evil Empire – exposes how America’s political leaders and intelligence agencies were caught off-guard as Vladimir Putin brought back the USSR, invaded Ukraine, and now threatens the world with a conflict that Putin’s apologists say could go nuclear. The back cover and spine. For a larger view click on the image.

The fall of the Berlin Wall misled many into thinking the Soviet KGB was dead. But infiltration of the West continued through “cultural Marxism,” and penetration by enemy agents, while the KGB, now called the FSB, looted Russia, consolidated its power, and rebuilt the Russian military, including its nuclear forces. America’s survival hangs in the balance.

Cliff Kincaid, founder and president of America’s Survival, Inc. (ASI), is a journalist and media analyst based in the Washington, D.C. area for almost 40 years and contributes one of the chapters in the new book. Other chapters are written by former KGB officer Konstantin Preobrazhensky and anti-communist analysts J.R. Nyquist and Toby Westerman. ASI has published the book, available on the website usasurvival.org and through Amazon.com

“Having fled from the Putin regime, Preobrazhensky understands modern-day Russia,” Kincaid said. “Analysts Nyquist and Westerman were writing about the return of Soviet military power under Putin at a time when Obama and Hillary were arranging a Russian policy ‘reset’ and Congress passed trade benefits for Russia.”

In reaction to assertions by some American conservatives such as Patrick J. Buchanan that Vladimir Putin is a Christian leader, Kincaid said that “We expose these claims as Russian disinformation, perhaps the greatest deception of all time.” The book describes in detail how Putin is using the Russian Orthodox Church as an ideological front in his war on the world, and how the Roman Catholic Church has failed to confront this evil. The book also examines how the KGB/FSB secretly manipulates Islamic and Palestinian terrorist groups and even the Iranian regime.

I have already made two book covers for Mr. Kincaid in the past, see them here. For a larger view click on the book cover.