Donald Trump was scheduled to do a rally in Chicago as part of his presidential campaign. After conferring with police authorities he decided to cancel his appearance. Mr. Trump’s primary concern was for the safety of those attending the rally. But that was not enough for the anti-Trump protestors like Portia Boulger, an activist from Ohio and supporter of Bernie Sanders. Boulger attended the Chicago rally in a Trump for president t-shirt and gave the Nazi salute.

Portia Boulger giving Nazi salute on left, and as a Woman for Bernie activist on the right.

This protest was well planned to do what it did, stop freedom of speech in Chicago. It can be characterized as a Chicago style drive by shooting, with the target being the First Amendment to the U.S. Constitution.

Immediately after this near riot Hillary Clinton, Ted Cruz, Marco Rubio and John Kasich denounced Trump for his “inflammatory rhetoric.” None blamed the protestors who appear to be made up of illegal aliens, Muslims, Moveon.org, members of Black Lives Matter, Democrats and other people like Portia Boulger a supporter of Bernie Sanders (see the raw video of the protest below).

This is akin to blaming the victim rather than the rapist.

This is political correctness gone wild. This is why Donald Trump is so popular, he is not politically correct and the people love him for it.

Watch how the Trump rally in Chicago nearly turned into an all out riot with confrontations between the protestors and Trump supporters,  video by Fox News KTVU Channel 2:

Political correctness is what Trump is all about. Donald Trump made the following statement on Fox and Friends:

A lot of what you saw last night [in Chicago] was Obama.

Here are some interviews after the clash in Chicago:

Kasich co-chair on Trump: ‘You’ve got to take him out with a head shot’

We Warned You: Chicago Trump Shutdown Is Just the Beginning

Trump: “A Lot Of What You Saw Last Night Was Obama” | Video | RealClearPolitics

EDITORS NOTE:  During the Obamacare protests, the Democratic controlled Congress amended Federal law H. R. 347 to make it illegal to protest at Federal campaign events. ALL of these anti-Trump rallies, be they violent or not, are FELONIES under this law that the U.S. Congress passed.

Zeke Miller from BuzzFeed Politics reports, “Supporters and opponents of Mitt Romney faced off today, September 20, 2012, outside of the Republican nominee’s rally here in an at-times-violent confrontation.”

“As hundreds of Romney supporters lined the sidewalk outside the Ringling Museum of Art, a group of more than 20 protestors carrying an effigy of Romney marched in and confronted them as both sides chanted,” notes Miller.

This is one of the pictures taken by Miller and appears in his column:

Notice the anti-Romey protester with dark hair in the white baseball hat and dark blue shirt wearing dark rimmed glasses with someone’s arm around him.

Now look at this video taken by Tampa Bay Online of protesters in Tampa on September 11, 2012. The protesters are supporting Islamists at a press conference in front of the Hillsborough County School Board building. The protesters infiltrated, shouted down speakers and agitated at the press conference, trying to disrupt it. Look at the young protester with dark hair, long side burns and wearing dark rimed glasses and a white open collar shirt who is visible at 43 seconds into the below video:

It is the same protester who led both the Sarasota and Tampa, FL events. His name is Kelly Benjamin and he is a professional protester who makes it his job to be at these events. Out of town protesters come to Sarasota, but at whose request? As Miller from BuzzFeed Politics reports, “One of the men leading the protest, organized by Occupy and Move-On according to demonstrators, repeatedly cut into the Romney line — drawing pushing and shoving.”

These professional protesters, led by Benjamin from Occupy, came to Tampa and Sarasota seeking to disrupt free speech. Whether pro-Islamist or anti-Romney they were there to create havoc, provoke reactions and promote anarchy. Some of the protesters proudly displayed anarchistic tattoos.

Benjamin ran for the Tampa City Council. He is in a number of YouTube videos here and here.

Below is a photo of Benjamin with Cornell West at Occupy Wall Street in New York. West draws his intellectual contributions from such diverse traditions as the black church, Marxism, pragmatism, and transcendentalism. West wrote that, in his youth, he admired “the sincere black militancy of Malcolm X, the defiant rage of the Black Panther Party […] and the livid black theology of James Cone.” 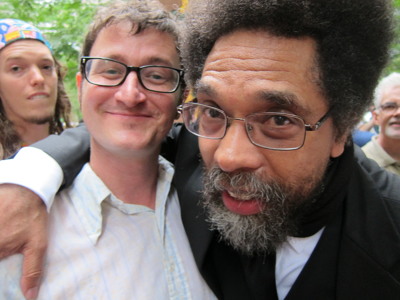