Secretary of Defense Chuck Hagel was unexpectedly run over by a bus in Washington, DC today as he was reaching for a buck President Obama was trying to pass him.

No word on whether the Secretary was injured or not, as journalists are having trouble extracting him from the pile of other individuals caught under the same bus.

“The wheels of the bus go round and round,” one rescuer said. “It’s difficult to get close to the vehicle because you’re afraid of getting hit by a spinning wheel yourself.”

Witnesses said it appeared as though the driver of the bus was intentionally trying to run over Mr. Hagel, or at the very least, did nothing to try and avoid the Secretary as he stepped off the curb. A composite description assembled by authorities described the driver as a tall, skinny guy with big ears and a huge ego. 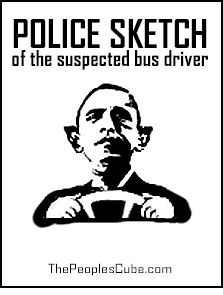 “I got the feeling he couldn’t throw a baseball very well but was good at golf,” noted an eyewitness on the scene.

Other witnesses had the feeling that Mr. Hagel simply did not see it coming.

“It’s not unusual for him, given his performance so far as Secretary of Defense,” said one defense expert.

Sources said Mr. Hagel may have been preoccupied by recent stories in the media naming him as the official who made the final decision to go ahead with the prisoner swap with the Taliban for Bowe Bergdahl:

Now the White House says Hagel made final call on Bergdahl as criticism of Obama over prisoner swap mounts. Congress learned on Monday that Secretary of Defense Chuck Hagel gave final approval for the prisoner exchange that freed Sgt. Bowe Bergdahl. Last week, Hagel said the swap was a unanimous decision made by senior officials. Hagel is expected to defend the prisoner exchange on Wednesday in an appearance before the House Armed Services Committee.

“The man’s memory is not very good if he doesn’t remember important decisions,” noted a White House insider. “It’s no wonder he forgot he shouldn’t walk in front of buses.”

Whatever the ultimate cause, this latest episode continues an odd string of bus accidents involving Obama Administration officials dating back to January, 2009.

“It’s like there’s a curse,” observed one journalist. “I’m not a superstitious woman but if I worked in the Obama White House, I’d be really careful about buses.”