Last Friday, June 26th, a committee of five un-elected lawyers ignoring the expressed will of an overwhelming majority of Americans, ruled that the definition of marriage as the union of one man and one women, which has existed for thousands of years, is unconstitutional. In the process the majority dispelled the concept “that we are a government of laws, not of men.” 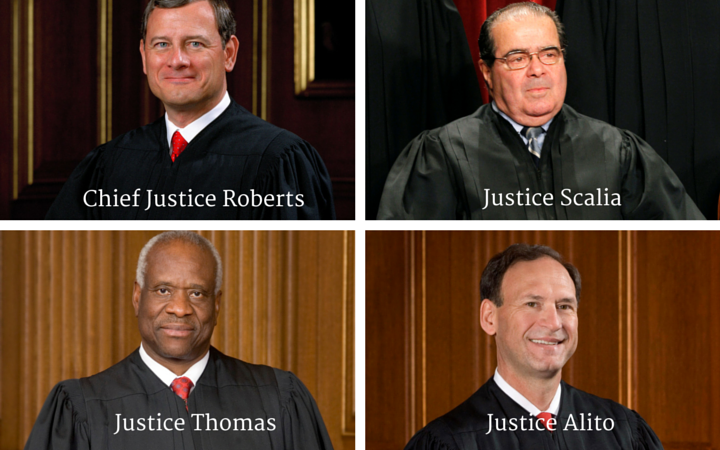 Four Justices wrote stinging dissents. Justice Scalia wrote that the majority opinion is “a threat to American democracy.”  Scalia went on: “This is a naked judicial claim to legislative—indeed, super-legislative—power; a claim fundamentally at odds with our system of government…. A system of government that makes the People subordinate to a committee of nine unelected lawyers does not deserve to be called a democracy.”

Of the 35 States that voted on the issue of same-sex marriage, 32 States opted to retain the traditional definition of marriage.  In fact, in the case of Obergefell v. Hodges, the Court reviewed the laws of Michigan, Ohio, Kentucky, and Tennessee.  In each of these states, an overwhelming majority of voters voted in favor of traditional marriage: 88% in Tennessee, 74% in Kentucky, 62% in Ohio and 59% in Michigan.

Chief Justice Roberts, destroying the majority’s legal basis for same–sex marriage, concluded, “The right it announces has no basis in the Constitution or this Court’s precedent.”  He wrote, “The Constitution itself says nothing about marriage, and the Framers thereby entrusted the States with “[t]he whole subject of the domestic relations of husband and wife.”

Up until last Friday, since the founding of our nation, and for the last approximately 2,000 years of Christianity, across all civilizations and cultures, the definition of marriage has been the same—the union of a man and a woman.

And Bible believing Christians cannot and will not accept this illegitimate decision.  Christ said:

“Have you not read that from the beginning the Creator ‘made them male and female’ and said, ‘For this reason a man shall leave his father and mother and be joined to his wife, and the two shall become one flesh’? So they are no longer two, but one flesh. Therefore, what God has joined together, no human being must separate.” (Matthew 19: 4-6, NASB)

The Court’s decision in this case is not the final word.  It is not the same as So sayeth the Lord.

In 1857, the Supreme Court used the same substantive Due Process rationale in its Dred Scott decision to protect the rights of slaveholders to own slaves as property.  As Chief Justice Roberts observed, “Dred Scott’s holding was overruled on the battlefields of the Civil War….”

Christians are born for combat, and so this decision, similar to the Courts creation of the constitutional right to abortion in Roe v Wade, will not end the debate.  We must launch a well-thought out offensive to change this decision and stop America’s decline as a result of her jettisoning the Christian principles upon which this great nation was founded.

In the short term we must ensure that federal and state laws are enacted that will protect the religious freedom of Christians, not only to speak out but also, to exercise their faith. But that is just the beginning. We must also begin to counter the slick, meaningless slogans used by homosexual advocates such as “marriage equality.”  A million-man march on Washington may also get the Court and politicians to act.

Families are too important to the survival of our nation for Christians to retreat to their religious ghetto. Besides, homosexuals will not be satisfied until every vestige of opposition to same-sex marriage is destroyed.  They have already embarked on a wave of persecution against those opposed to their agenda.  It will only get worse.

Princeton law professor Robert George pointed to the increasing oppression of Christians who oppose a redefinition of marriage. He said that business owners, adoption agencies and workers in several states have already been threatened, pushed out of their industries, or forced to violate their consciences in order to operate their businesses. George pointed out that many government employees have been subjected to disciplinary action and threatened with termination for expressing their biblical views on marriage. Unquestionably there will be efforts to revoke the tax-exempt status of the Catholic Church as well as other Christian organizations that teach that marriage is the union of a man and woman. And the list will continue on.

The Thomas more Law Center filed several friend of the court briefs in support of the definition of traditional marriage. It has defended the rights of Christians to speak out  and act on this issue and it will continue to do so.

Stop the Media From Silencing Your Voice on Marriage

Why Bobby Jindal Is ‘Not Evolving’ on Marriage

In-Depth: 4 Harms the Court’s Marriage Ruling Will Cause