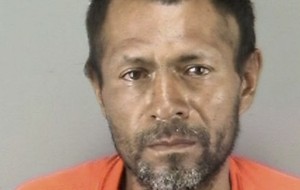 Francisco Sanchez murderer of Kathryn Steinle from San Francisco, an illegal alien who was deported 5 times.

With the San Francisco woman murdered by one of Barack Obama’s “new Americans,” we should ask: how much innocent blood will be spilled on the altar of the Left’s “fundamental transformation” of America? While callow and cowardly corporations are severing ties with Donald Trump because he dared speak a truth in an age of lies, the reality of far too many of the illegals invading our country is this:

Some will say, of course, that Americans sometimes do such evil as well. But it’s also true that Americans do sometimes take the menial jobs so often performed by illegals, yet we nonetheless hear the statement, “They’re just doing the jobs Americans won’t do.” So since we’re indulging rhetoric and generalizations here, turnaround is fair play.

Will people ever rise up and make that sickening agenda-facilitating suppression of truth known as political correctness exactly what it should be: a recognized vile heresy, to be stamped out with extreme prejudice? I recently heard someone take exception to the term “illegals,” making that now stale point that “no one is illegal” (cue the tiny violin). This person argued that bank robbers break the law as well, but we don’t brand them “illegals.” Point taken. We call bank robbers “criminals.”

And if the Left wants to apply the same descriptive to illegal aliens, it works for me.

(Or would “undocumented criminals” be preferable?)

It would be wholly accurate, too. Generally lost in our self-flagellating, suicidal pander-fest is that every illegal migrant is a criminal by definition. This is why the lying Left — ever engaging in language manipulation — dislikes the word “illegal”: accurate terminology relates the truth of a matter. This is intolerable when your agenda is completely contrary to Truth.

An even better adjective for illegals, however, is “invaders.” And Francisco Sanchez, the vile murderer of the San Francisco woman, Kathryn Steinle, certainly fits the bill. He repeatedly invaded our country for the purposes of destruction, dealing drugs and being convicted of felonies seven times until he finally took a life. Yet he is not the only one culpable in his malevolent act.

What do you call government officials who not only abdicate their responsibility to halt an invasion, but actually aid and abet it? Quislings? Traitors? Leftists? But I repeat myself.

These terms are not too strong. I previously reported on Obama’s plan to “seed” communities around America with foreigners who would, as the scheme goes, “navigate” and not assimilate as they “push citizens into the shadows” (that is, those they don’t push into graves). Again, what do you call such people?

It isn’t just Obama, of course. These traitors have many names, such as Jerry Brown, Jeb Bush, Rahm Emanuel, Hillary Clinton, Luis Gutierrez and Mark Zuckerberg. But, hey, who can blame them, right? They’re just pushing the policies Americans won’t push.

Unfortunately and as has been said before, treason today is now the norm. If you don’t drink deeply of the cup of multiculturalism, internationalism, Western demographic genocide and cultural suicide, you’re a “nativist” or, worse still, a “racist,” the latter of which has just come to mean “anything bad” to young skulls full of mush whose now putrefying gray matter endured endless sanitary spin cycles in the propaganda mills masquerading as universities. The inmates not only run the asylum, they’re numerous enough to classify the normal as abnormal. You’re a boy who’s sure he’s a girl? You’re white but identify as black? You think an invader is the equivalent of a citizen? Those people who’d cramp your style with that pesky Objective Reality are the problem. Off to re-education camps with them.

Another fancy is that Mexico isn’t a dangerous enemy. If you’re an illegal alien in Mexico, the best thing that can happen to you  is that you merely get deported; also possible is that the police will beat you Pelosi-senseless or even kill you (it’s said that you can buy your way of a fatal hit-and-run in Mexico for $450; the rule of law isn’t exactly big there). And no ACLU will come running and sue the government on your behalf. None of this stops that dysfunctional cartel-ridden nation from issuing its people actual instructions on how to better invade the U.S. and game our system. Nor does it stop them from lecturing us on the humane treatment of undocumented criminals. This is why a real president would tell the Mexican regime that if it didn’t stop weaponizing its population against us, we’d demonstrate that borders can be transgressed both ways and make Black Jack Pershing look like a missionary.

Instead, people are more worried about the Confederate flag flying in America than the Mexican flag flying here. As for Obama and his ilk, they welcome invaders because, upon being naturalized, 70 to 90 percent of them vote for leftists. And our leftists truly would rather reign in Hell than serve in Heaven.

But who is really to blame? Our Hell-raisers are only in power because far too many of us are just voting for the politicians Americans wouldn’t vote for.

How San Francisco Aided and Abetted the Murder of Kate Steinle

How Unusual Is the Francisco Sanchez Case? The Facts About Illegal Immigrants and Crimes