The taxpayer-supported Department of Education (DOE) is funding an Islamic indoctrination program in America’s public schools in grades 5 through 12, Christian Action Network has learned.

Students are taught to learn Islamic scripture, give the meaning of that Islamic verse, and explain how they can use it in their daily lives.

“How can this be anything other than indoctrination?” said Martin Mawyer, president and founder of Christian Action Network (CAN).

The DOE offers no similar lesson plans for Christianity, Mawyer added. “There is absolutely no balance in the curricula offered. Only Islam is given a full course of study.”

“Access Islam,” from the PBS web site, funded by the U.S. Department of Education.

The Islamic education program, funded by the DOE, is primarily disseminated through PBS LearningMedia and the Educational Broadcasting Corporation.

The curriculum is called “Access Islam” and includes such lessons as: 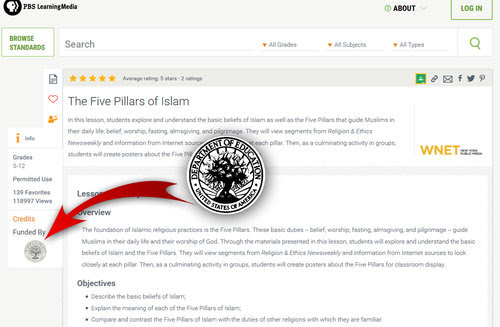 The U.S. Department of Education’s funding of an Islamic indoctrination curricula is the topic of a new video produced by Christian Action Network.

“Can anyone imagine The Lord’s Prayer recited in a classroom?” asked Mawyer. “Or students taught that the Bible is the inspired, infallible final Word of God? Or displaying the Christian cross in the school classroom? Or lesson plans that encourage students to pray to Jesus Christ? It’s out of the question! Christ, the Bible, the cross and Christian prayer were thrown out our public schools decades ago.

In one DOE funded video, students are introduced to a man who has converted from Christianity to Islam.  The Muslim man tells students that Islam “is the true worship of God.” The man then instructs children to “submit yourself” to Allah.

Mawyer said he was so shocked when he learned that the Islamic curriculum was funded by the DOE that his organization fired off a legal “Letter of Demand” to Education Secretary Betsy DeVos demanding that the Islamic program be defunded and removed from access to the public schools of America. In the Five Pillars of Islam lesson plan, students are told to “focus on learning about the core duties of Muslims” and to “read about what it means to proclaim faith or belief as a Muslim.”

“As I scanned through the information online, it became obvious to me that the material is much more like a Sunday School lesson plan than a proper educational lesson on Islam,” said Mawyer. “These lessons are teaching our children and grandchildren how to be, act and live like Muslims. It’s outrageous! And every Christian and Jewish parent in America should be appalled at how our children are being indoctrinated into the Islamic belief system and lifestyle.”

Students are taught in detail how to pray like a Muslim in the lesson plan “Salat: Prayer in Muslim Life.”  The lesson plan includes prayers that can be recited by students, descriptions of how and when to pray, and refers students to the web site “islamicity.com” to get more information about Islamic prayer times around the world.

In this same study students are told to memorize the following prayer from Quaran 96:1-5:

“In the name of thy lord who created man from a clot. And thy lord is the most generous who taught by the pen, taught man that which he knew not.”

Mawyer noted that students are NOT taught that Jesus is Lord, but they DO learn that Allah is God.

Preview for CAN’s latest film “Islam In The Schools A Quick Look”. To order the full version and learn more about this topic visit us at www.ChristianAction.org

“I am calling on all Americans to demand the Department of Education dump this program,” said Mawyer. “This is an outrageous abuse of our taxpayer dollars, and an affront to the rights of parents to teach their children the religion of their choice.”

As well as the DOE video, CAN has also released a video that takes a broader look at Islam in the Schools. It can be viewed here.

Download Christian Action Network’s letter of demand to the Department of Education here.