The hijab, progressives’ new diversity symbol, was invented in the 1970s over 1300 years after the Quran was written.  While Muslim women protest the Islamist hijab dictates in Iran and Saudi Arabia, American Eagle Outfitters and Nike promote the oppressive headgear in America. 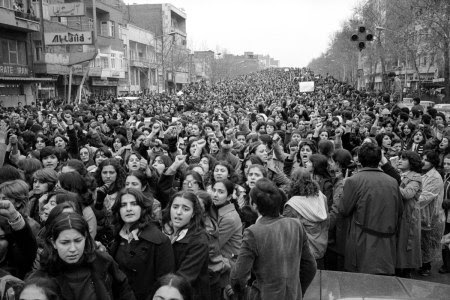 100,000 Iranian women protest in Teran the Islamist dictate requiring them to wear the hijab in 1979.

There are two action emails are provided near the end of this article.

The hijab, progressives’ new diversity symbol, was invented in the 1970s over 1300 years after the Quran was written.  The truth is the hijab is not derived from the Quran but is legislated by Islamist dictates and fatwas that oppress and dominate woman.   Strict Islamic law and fatwa enforcement requiring women to wear the hijab started only within the last 50 years.  Muslim women protest the Islamist dictate in Iran and Saudi Arabia while American Eagle Outfitters and Nike promote the oppressive headgear.  American Eagle Outfitters’ and Nike’s sale of the hijab is empowering “the well-financed effort by conservative (ie radical) Muslims to dominate modern Muslim societies.”

The hijab was invented in the early 1970s by Mussa Sadr, an Iranian mullah who had won the leadership of the Lebanese Shi’ite community.   Muslims believe that the Quran was writtenover a period of 23 years, beginning on 22 December 609 CE, when Muhammad was 40, and concluding in 632, the year of his death.

This means the hijab was invented over 1300 years after the Quran was written.

Islamic law and fatwas did not start forcing women to wear the hijab until 1981.   “In 1981, Abol-Hassan Bani-Sadr, the first president of the Islamic Republic, announced that “scientific research had shown that women’s hair emitted rays that drove men insane.” To protect the public, the new Islamist regime passed a law in 1982 making the hijab mandatory for females aged above six, regardless of religious faith. Violating the hijab code was made punishable by 100 lashes of the cane and six months imprisonment.  By the mid 1980s, a form of hijab never seen in Islam before the 1970s had become standard gear for millions of women all over the world, including Europe and America.” 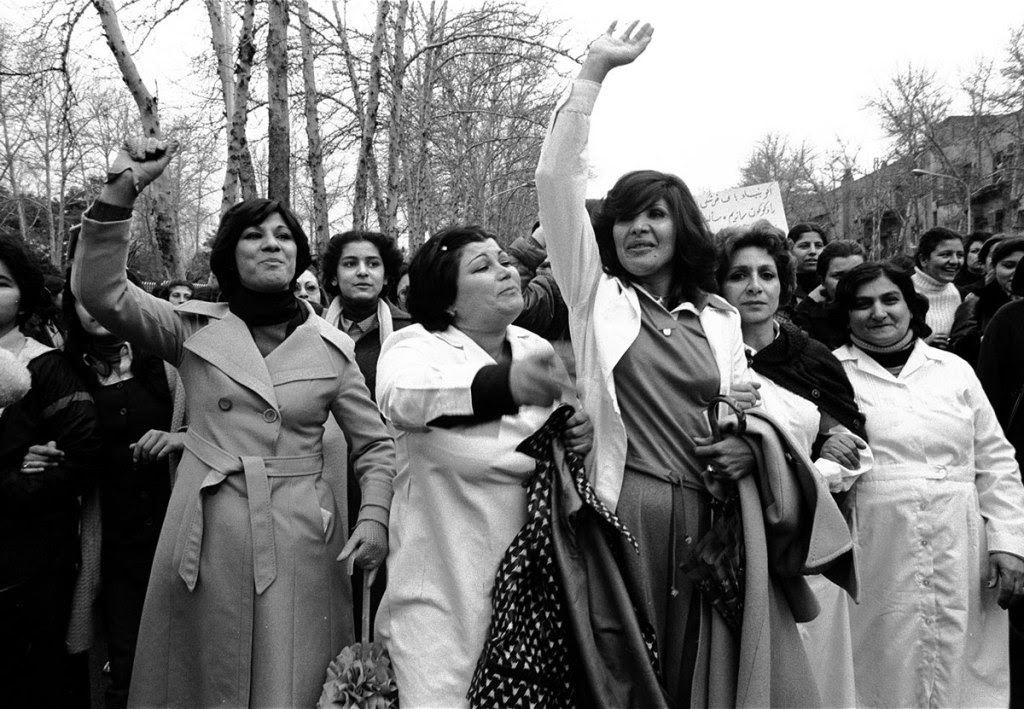 The New York Times published an article titled “The day 100,000 Iranian women protested the head scarf (hijab).”  A seldom-seen collection of photographs, shot in Tehran in 1979, is challenging perceptions of the feminist movement in Iran.  The article states in part:  When 34-year-old photographer Azadeh Fatehrad first laid eyes on an image by Hengameh Golestan, of women protesting in the streets of Tehran in 1979, she was struck immediately — it was unlike anything she had seen before.

Born in 1981 in Iran, Fatehrad had learned in school that women made a smooth transition to Islamic rules imposed after the 1979 Revolution — in particular adopting a compulsory dress code, the hijab. But Golestan’s image told a different story: thousands of women in the street, protesting the announcement that the headwear would be mandatory.

OddNaari published an article on July 13, 2013 titled “Iranian women are now defying compulsory hijab rule by refusing to wear it inside their cars.”  The article states in part:  “The women of Iran have taken the fight against hijab to another level now.”

The Kingdom of Saudi Arabia published the following fatwa titled “The legality of the Hijab” (Part No. 5; Page No. 224)

All perfect praise be to Allah, the Lord of all worlds. May Allah’s Peace and Blessings be upon the noblest Prophet and Messenger Muhammad, his family, and Companions. I have read an article written by the person called Ahmad Baha’ Al-Din, in some newspapers. He alleged the lawfulness of some things that Allah prohibits. In his column “Yawmiyyat”, (Al-Ahram Newspaper, issues nos. 36992, 36993, 36994, 36996), the writer launched a severe attack on Hijab (veil) and Niqab (face veil). He called to unveiling the face and considered Hijab a Bid`ah (innovation in the religion). He claimed it is just a matter of dress that is part of personal freedom. He even alleged that women used to wear Niqab as a tradition and Islam did not ordain or come with it. He falsely claimed that women used to sit with the Prophet (peace be upon him) unveiled and used to go for trade, pasturing and war with their faces uncovered and they remained in such a state during the era of the Rightly-Guided Caliphs, the Umayyad, and Abbasid Caliphates. He said that when the Turks embraced Islam, they spread their non-Islamic traditions of their tribes, such as the one-eyed veil, yashmak, and imposed them on Muslim and Arab women. The writer expressed his views on the permissibility of unveiling the face, denied Hijab, inserted false claims and lies, and twisted the proofs to give different implications.

It is known that urging women to unveil their faces is an evil call, rejected by Islam and the sound intellect; it is an anti-Islamic idea, indeed.

Saudi women are also pushing back against Islamic law requiring them to wear the hijab. StepFed published an article on July 14, 2017 titled: “Saudi religious police will study why some women don’t wear hijab.”

on December 21, 2015 titled “As Muslim women, we actually ask you not to wear the hijab in the name of interfaith solidarity.”  The article states in part:

For us, as mainstream Muslim women, born in Egypt and India, the spectacle at the mosque was a painful reminder of the well-financed effort by conservative Muslims to dominate modern Muslim societies.   We reject this interpretation that the “hijab” is merely a symbol of modesty and dignity adopted by faithful female followers of Islam.

This modern-day movement, codified by Iran, Saudi Arabia, Taliban Afghanistan and the Islamic State, has erroneously made the Arabic word hijab synonymous with “ headscarf.” This conflation of hijab with the secular word headscarf is misleading. “Hijab” literally means “curtain” in Arabic. It also means “hiding,” ”obstructing” and “isolating” someone or something. It is never used in the Koran to mean headscarf.

In colloquial Arabic, the word for “headscarf” is tarha. In classical Arabic, “head” is al-ra’as and cover is gheta’a. No matter what formula you use, “hijab” never means headscarf.  The media must stop spreading this misleading interpretation.

Pew Research found that only forty three percent (43%) of American Muslim women wear hijabs according to an article published by NPR on April 21, 2011.  The NPR article states in part “The split between women who’ve covered and women who’ve never done so has existed for decades. But now a generation of women is taking off the headscarf, or hijab.” Therefore, after six years of “a generation of women taking off the hijab” the number of Muslim women now wearing the hijab in America is likely even less than forty three percent.

American Eagle Outfitters’ and Nike’s sale of the hijab is empowering “the well-financed effort by conservative (ie radical) Muslims to dominate modern Muslim societies.”  These retailers are making it more difficult for Muslim women to break away from the Islamist domination and embrace American culture.

Florida Family Association has prepared emails for you to send to urge American Eagle Outfitters and Nike officials to discontinue selling the hijab which is a symbol of Islamist oppression.

To send your email, please click the following links, enter your name and email address then click the “Send Your Message” button. You may also edit the subject or message text if you wish.

Click here to send your email to urge American Eagle Outfitters (DSW) officials to discontinue selling the hijab which is a symbol of Islamist oppression.

Click here to send your email to urge Nike officials to discontinue selling the hijab which is asymbol of Islamist oppression.

Your email support is making a difference.

EDITORS NOTE: To share this effort copy and paste this article on your social media sites.

Nike Board of Directors