There are two YouTube videos of a man wearing a pink shirt with NASA on it who some believe is Stephen Paddock, the man who slaughtered 59 people and wounded hundreds more in Las Vegas, Nevada. We present these videos for our readers to view and make up their own minds about is this is or is not Stephen Paddock.

If anyone can identify the individual at this anti-Trump protest please contact the Las Vegas Police Department or the FBI.

The below video titled “Stephen Paddock was an anti Trump supporter”:

Steven Haffley published the below YouTube video and commentary on Oct 2, 2017:

In the deleted video are the below screen shots of what is believed to be Stephen Paddock wearing a pink hat, like the ones worn during the Washington, D.C. woman’s march, and a t-shirt with NASA on it. Next to him, right, is a woman believed to be Marilou Danley. 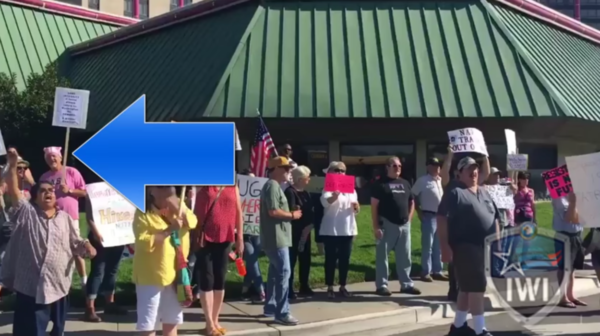 This is the evidence composed by IWI for review by the FBI on this subject concerning video footage of the Las Vegas shooter Stephen Paddock. In addition to the above footage, we present the following additional evidence:

A. This picture is of the man seen in the above video standing by what appears to be Marilou Danley, a person previously identified as a person of interest in the shooting but later cleared.. Notice the distinctive sunglasses: B. The same woman rolls her pantlegs up the same exact way in other pictures, so we have distinctive glasses, same appearance, same dress style: C. A protester calls the man in the pink shirt “Steve”:

D. The pink shirt in the video says Nasa, Lockheed Martin confirmed the shooter worked for them between 85-88. Lockheed martin does a lot with Nasa: https://www.washingtonpost.com/news/p…

E. An associate of Marilou Danley’s daughter told Marilou’s daughter to have her mother delete her Facebook page at the first notice of the mass shooting: E.2 When confronted about why she was trying to cover up the facebook profile, which as a picture of Marilou vacationing in the Middle East, the tweet was deleted and I was blocked from following her: With all we presented, no matter what side of the issue you are on, there is significant reason to have an Agency with more investigative tools at their disposal to look into this. Hence the purpose of this video is to ensure this happens. It is believed the man seen in this video is the las vegas shooter, Stephen Paddock, attending an anti-trump protest in Reno Nevada in August 23rd 2017 (Approximately). You may upload this video to anywhere you want, use it in any media, etc, you do not need my permission I’m not doing this for personal recognition, I’m doing this to figure out why 500 people were shot for no reason.

UPDATE: Paddock And Girl Friend At 2017 Anti-Trump Rally In Nevada – Proof He Previously Worked At NASA – Worked On Advanced Scope At Lockheed.

A Concert of Evil

Investigators Reluctant to Call Vegas Massacre an Act of Terror