The Department of Homeland Security (DHS), and four other government agencies, missed identifying the radicalized Muslim couple who were responsible for the slaughter in San Bernardino. That’s the bad news. The good news is that the DHS was quick on the case of a group of Ohio High School Students who created the Killery Clinton political action committee.

What’s wrong with this picture?

A group of Ohio students who started an anti-Hillary Clinton super PAC in their government class were forced to can their creation after a visit from federal officials.

“We all try to be good students and this is not reflecting positively on us, so I hope you understand,” one of the students wrote in response to Cleveland.com’s request for comment about the super PAC “Killary Clinton.” 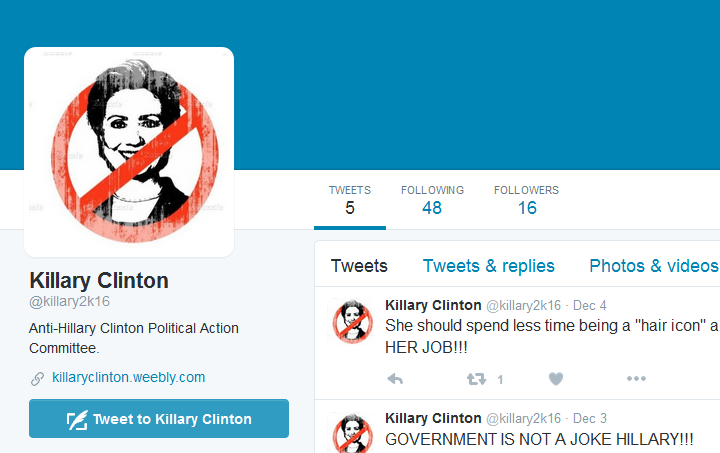 The Pataskala, Ohio junior and two classmates were inspired to launch the PAC after another student, 17-year-old Cory Steer, started his own super PAC called “Better America for Tomorrow” to support Republican presidential hopeful Marco Rubio.

“We thought it was cool so we just talked about it,” one of the students, who were not identified, told the news site.

The students filed their paperwork with the Federal Election Commission Nov. 17 for the PAC “Killary Clinton” because their focus was on criticizing the former Secretary of State.

“We just did it for the heck of it,” the student said.

The teens also set up a Twitter account to get their message out, and their efforts quickly gained attention.

“The Department of Homeland Security, which is the umbrella department over the Secret Service, came to Pataskala and asked questions,” Cleveland.com Washington Bureau Chief Stephen Koff wrote. “Its inquiry seems to have been along the lines of ‘just checking it out,’ although a spokeswoman said the department probably would not be able to answer more specific questions (and has not responded to those questions).”

Koff added that the students’ government teacher and principal both ignored requests to discuss the issue. He alleges the principal also spoke with students and “just wanted to make sure his school and students weren’t doing anything improper.”