Three decades after the ‘Moral Majority’ revolution, after fighting numerous battles for our culture, we can claim victory on, well … hardly anything.

It’s still against federal law to smoke weed. Right? But who cares?

And how about this madness: There’s world outrage over a hunter’s killing of a lion in Zimbabwe, but hardly any public outrage over hundreds of Christians being beheaded in the Middle East and Africa by Islamists.

A Florida man was told by a Pinellas County air quality inspector to keep his barbecue smoke in his yard. What? This should make Linda Blair’s head spin all over again.

Maddening, I tell you.

All right, I need to stop or I’ll never get to my point.

I’ve been in the movement of defending America’s traditional, moral and biblical heritage for more than 30 years, first as the editor of Dr. Jerry Falwell’s Moral Majority Report in 1983, then as president of Christian Action Network since 1990.

The battles back in the day seem small, compared to today’s struggles.

We were fighting abortion and court decisions to kick God and prayer out of the public schools, as well as combatting the relentless chants of feminists, homosexuals and secularists to distort, pervert and destroy the laws of nature and nature’s God.

Three decades later we can claim victory on, well … hardly anything.

Every once in a while we would celebrate a win, such as passing the Defense of Marriage Act, which defined marriage as the union of a man and a woman in federal eyes, or the “Don’t Ask, Don’t Tell” policy on homosexuals openly serving in the military, or the Religious Restoration Act, which ensured that religious freedoms were protected from federal overreach.

And we did wage a successful campaign against the National Endowment for the Arts, which was funding some of the most blasphemous, sadomasochistic and sexually gruesome art imaginable.

(My “favorite” was the NEA’s funding of an art project called “Testicle Stretch with the Possibility of a Crushed Face.” It featured a man lying prone on a platform, a rope tied to his testicles that led to a pulley supporting heavy metal weights. If his testicles gave out, his face would theoretically get crushed, giving the art project its brutal and insane name.)

While a couple of these victories remain, the courts, Congress, presidents or federal administrators have gutted most of them.

Now we find ourselves fighting battles that make you wonder whether we are still living in America. It’s as if we’ve been conquered but refuse to admit it.

No army ever came. No outside soldiers ever took over the White House. The American flag still flies. And we still sing the National Anthem at baseball games.

But while the White House lights up in gay rainbow colors in celebration of legalized homosexual marriage, there are no red, white and blue lights on the White House on the fourth of July.

The fact that the head of the DNC can’t explain the difference between a Democrat and a Socialist should tell us a lot.

The president of the United States ignores the laws. The U.S. Supreme Court ignores the Constitution. And Congress, well that’s easy: They ignore the people.

The IRS is using its agents to punish conservatives. If you support anything that America once stood for, you are a hatemonger. If you claim any of your beliefs are grounded in the Bible, you are immediately dismissed as a flat-earth-society lunatic.

Then there’s this particularly harrowing story out of Wisconsin, reported in the National Review: 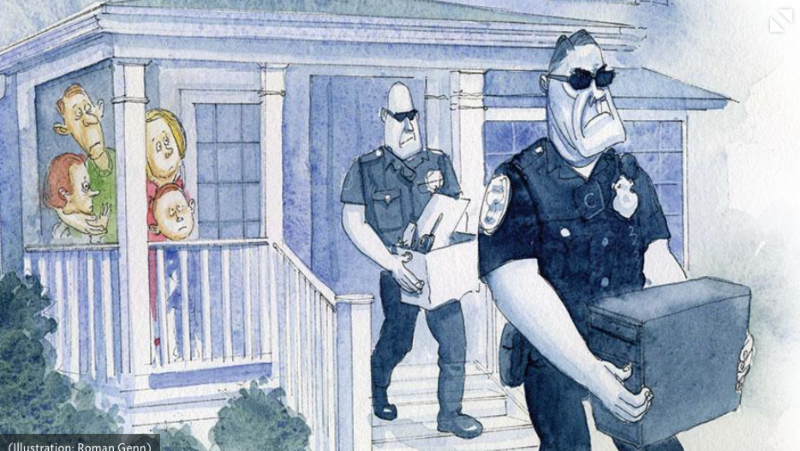 In an article titled, “They came with a battering ram,” the publication exposed how certain Wisconsin officials raided the homes of innocent Americans simply because they publicly supported Gov. Scott Walker’s re-election bid and his “Wisconsin Budget Repair Bill.”

Here’s just a small excerpt from this rather frightening story. It’s the story of “Anne” and the police invasion of her home:

Someone was pounding at her front door. It was early in the morning – very early – and it was the kind of heavy pounding that meant someone was either fleeing from – or bringing – trouble. “It was so hard. I’d never heard anything like it. I thought someone was dying outside.”

She ran to the door, opened it, and then chaos. “People came pouring in. For a second I thought it was a home invasion. It was terrifying. They were yelling and running, into every room in the house. One of the men was in my face, yelling at me over and over and over.”

It was indeed a home invasion, but the people who were pouring in were Wisconsin law-enforcement officers. Armed, uniformed police swarmed into the house. Plainclothes investigators cornered her and her newly awakened family. Soon, state officials were seizing the family’s personal property, including each person’s computer and smartphone, filled with the most intimate family information.

When you get a chance, read this remarkable and disturbing article, written by David French. It will send shivers down your spine and make your hair stand on end.

Anne was told by police not to call her lawyer and not to tell anyone about the raid – not her mother, her father nor her closest friends.

She was left with a single question: “Is this America?”

Which brings me to this question: As Iranian citizens chant “Death to America”… are they too late?