“Christianity in the Middle East is shattered,” Rep. Jeff Fortenberry, Nebraska Republican, told the IDC [In Defense of Christians] conference on Sept. 9. “The ancient faith tradition lies beaten, broken and dying. Yet Christians in Iraq and Syria are hanging on in the face of the Islamic State’s barbarous onslaught. This is genocide.”

Yes. And as the Islamic State itself tells the world, it is the direct result of devout Muslims following the commands in the Qur’an, imitating Muhammad’s example as extolled in the ahadith and the Sira, and applying the doctrines of Islamic jurisprudence. Islam itself is the direct cause of the first genocide of the 21st century.
“Pressure Grows to Declare War Against Christians a Genocide,” By Douglas Burton, Washington Times via AINA, September 23, 2015: 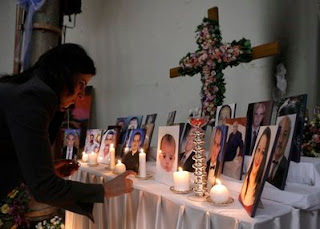 Human rights activists see it. Foreign leaders see it. And more than 80 members of the U.S. Congress see it. Together, they are pressuring the leader of the free world to declare there is a Christian genocide going on in the Middle East.

Their campaign — which was discussed at a Capitol Hill conference earlier this month hosted by the two-year-old In Defense of Christians nonprofit — has an influential ally on its side.

Pope Francis, making his first visit to the United States on Wednesday, has noted the number of Christians being martyred today exceeds the number martyred during the days of the Roman Empire.

In fact, the sheer numbers of Christians murdered and tortured every year in a dozen countries in the developing world is only getting worse, thanks to the relentless campaign of the ISIS and al-Qaeda terror groups.

For example, in 2014, 2,000 Christians were murdered in Iraq alone, which is the number cited by historian Edward Gibbon as the total number of Christian martyrs in the first three centuries of Christianity.

In Iraq, where Christian churches were planted 1,800 years ago, Christianity has been wiped out except for 200,000 refugees sheltering in Kurdistan and a few in Baghdad. Their language, Aramaic; their homeland, the Nineveh Plain; and their calamity are Biblical in scale. Hundreds have been publicly tortured and executed in Mosul while women and children have suffered severe levels of sexual violence since the Islamic State took control in 2014.

“Christianity in the Middle East is shattered,” Rep. Jeff Fortenberry, Nebraska Republican, told the IDC conference on Sept. 9. “The ancient faith tradition lies beaten, broken and dying. Yet Christians in Iraq and Syria are hanging on in the face of the Islamic State’s barbarous onslaught. This is genocide.”

A year after Congress authorized a special envoy to expedite the humanitarian relief of persecuted minorities in Iraq, the Obama administration has finally chosen a person to fill the spot. Knox Thames has been named the State Department’s special adviser for religious minorities in the Near East (NEA) and South and Central Asia (SCA). His appointment was announced Sept. 16 by Ambassador David Saperstein, ambassador-at-large for international religious freedom. The Christian refugees in Irbil hope that Mr. Thames hits the ground running.

“The appointment represents a positive step toward strengthening the U.S. response to religious persecution in the Middle East,” says Delia Kashat, who works for the Nineveh Council of America, a newly established office that raises awareness on the plight of threatened Iraqi minorities, including the Yazidis.

“History is repeating itself,” she says of the latest crisis that reminds many refugees of the massacre of 3,000 Assyrian Christians in August 1933 and the Armenian genocide of 1915 that also claimed the lives of many Assyrian Christians.

“Having suffered multiple genocides over time, the true natives of Iraq and Syria serve as the equilibrium and peacemakers of the country,” she says. Since the U.S. invasion of Iraq in 2003, Assyrian and Chaldean Christians in all provinces have suffered kidnappings, torture and brutal attacks, and massive exodus has followed the ascendance of the Islamic State.

Ms. Kashat grew up in the Detroit metro area, home to around 150,000 Chaldean Christian immigrants, but her parents were born in the Nineveh Plain and fled Iraq in 1973. “They came to this country because this is where is they could freely live and practice their faith,” she says.

Whether they call themselves Assyrian or Chaldean, Catholic or Orthodox, Iraqi Christians belong to a common ethnicity and claim descent from the ancient peoples who established Assyria 4,500 years ago.

Currently there are 14 Christian parties seeking seats in the Kurdish regional parliament, and each is tied to a particular church, according to Louay Mikhael, a Chaldean Christian rom Dohuk, who arrived in Silver Spring, Maryland, with his wife and child only in April.

Mr. Mikhael represents the Chaldean Syriac Assyrian Popular Council of the Kurdish Regional Government (CSA Popular Council), which will open its lobbying office in Washington in the coming weeks. Both Ms. Kashat and Mr. Mikhael are working in Washington to raise awareness on the issues affecting ethnic-religious minority populations.

After the surge of the Islamic State in the summer of 2014 approximately 130,000 people — virtually the entire population of Christians remaining in the Nineveh Plain near Mosul — have either fled the country or taken shelter in Kurdish cities.

“On Aug. 6 when ISIS attacked Qaroquosh, approximately 55 miles from Irbil, we had 60,000 people arriving in one day,” said Rev. Douglas Bezi, the Chaldean Catholic priest who manages a refugee center in the Christian suburb of Ainkawa.

The city of Irbil and its suburbs have nearly 100,000 Chaldean Catholic refugees sheltering in rented apartments, unfinished buildings or steel shipping containers. “When they arrived, I divided them into two groups, those who wanted to return in one group and those who wanted to leave the country,” Father Bezi said. “But after a year, no one wants to return to the Nineveh Plain. More than 60 percent of my people are traumatized, and wake up every day demoralized.”

Iraqi Christian advocates are united in their priorities for the United States: They want direct humanitarian assistance and international condemnation of the abuses these vulnerable groups face.

A Congressional resolution introduced Sept. 9 by Mr. Fortenberry and Rep. Anna Eshoo, California Democrat, calls on signers of the United Nations’ Convention on the Prevention and Punishment of the Crime of Genocide, signed in 1948, to be “reminded of their legal obligations” under the agreement.

It also says those who have forced the migration of religious communities from their ancestral homelands — especially the Nineveh Plain, the historic home of Yazidis — be “tracked, sanctioned, arrested, prosecuted and punished.”

“Christianity is running the risk of becoming extinct in the region it was born. What is happening to the Christian community in Iraq will happen to all of Christianity in the Middle East if we don’t take action,” Ms. Kashat said.

Douglas Burton, a former U.S. State Department official in Kirkuk, Iraq, is a former opinion editor of Insight on the News.