“You fundamentally can’t change sex… Transsexualism was invented by psychiatrists,” said former “transsexual” Alan Finch in 2004. This is a truth; however, it has not stopped the advocates of an invented status from trying to change society,” writes Selwyn Duke in his column Missing the Point on the “Transgender” Bathroom Wars.

This is about socially reengineering society — about changing hearts and minds — by legitimizing made-up sexual statuses.

Transsexualism is a belief system, a dangerous one to both the individual and to society. President Obama has made it his mission to further Transsexualism and put American women and little girls at risk, both culturally and physically.

The American College of Pediatricians warns educators and legislators that “a life of chemical and surgical impersonation of the opposite sex” is dangerous for children.

In a strongly worded statement issued today, the professional association of pediatricians says “a person’s belief that he or she is something they are not is, at best, a sign of confused thinking.” It describes such thinking as problem that exists in the mind and not the body and “it should be treated as such.”

The college of pediatricians is joining a heated debate that increasingly pits concerned parents against school teachers, administrators, legislators, and transsexual advocates who are pushing the trans agenda in grade-schools, city governments, state governments, and the federal government.

Heather Clark reported, “A lesbian lawmaker [Patricia Todd, D-Birmingham] in Alabama suggested this week that the real safety threat for children is not men who identify as female using women’s restrooms, but faith leaders in churches and teachers in schools.”

This is Transsexualism writ large.

Political language… is designed to make lies sound truthful and murder respectable, and to give an appearance of solidity to pure wind. Fr. Paul Scalia is a priest of the Diocese of Arlington, Va. He serves as the Bishop’s Delegate for Clergy.

Fr. Paul Scalia writes on the demonic nature of the Transsexualism movement: not that transgender people are evil but that their ideology pleases the devil. In Fr. Scalia’s column “The Devil, You Say?” notes:

Three times in his speech at the National Catholic Prayer Breakfast, Cardinal Sarah described gender ideology [Transsexualism] as “demonic.” More recently, Oklahoma City’s Archbishop Coakley used the same word addressing the issue. So did Bishop Paprocki of Springfield regarding gay marriage. A strong word, to be sure. But most people misunderstand why. Some take “demonic” for mere hyperbole. Something is not just bad, but really, really bad. Others see it as rash judgment of opponents – literally demonizing them. Still others take it as just an overstatement by religious fanatics, who are unhinged anyway. 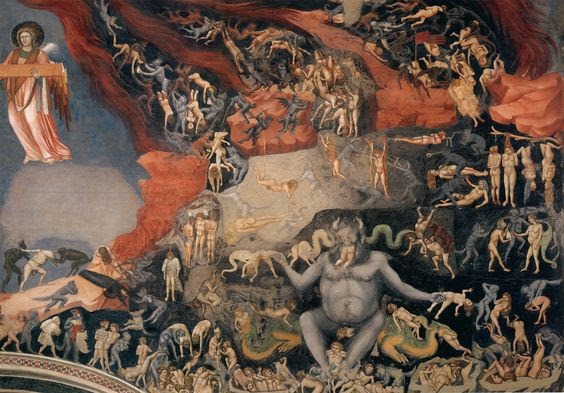 Satan and the damned in The Last Judgment by Giotto (di Bondone), 1306 [Cappella Scrovegni, Padua]

Gender ideology repeats the basic lie of the evil one: “You will be like gods.” (Gen 3:5)  Of course, this lie lurks behind every temptation. Every sin comes from that prideful desire to supplant God. But in the arena of human sexuality, it has greater gravity.Read more.

Duke concludes with the following warning:

Is it time to put Transsexualism back into Pandora’s box? It it time to tell the truth?

Strong Percentages of Americans Unlikely to Consider Voting for a Muslim, Transgender, or Agnostic/Atheist Presidential Candidate

Missing the Point on the “Transgender” Bathroom Wars