A thorough debunking of the propaganda presented by Vox in their video on gun control and “mass shootings” in the U.S.

The Evil of Gun-free Zones

EDITORS NOTE: Read more at http://LouderWithCrowder.com including all sources at http://louderwithcrowder.com/vox-gun-… BELLEVUE, Wash. /PRNewswire-USNewswire/ — The Citizens Committee for the Right to Keep and Bear Arms today publicly thanked Hillary Rodham Clinton for energizing the nation’s firearms owners to political action and virtually assuring their heavy turnout for the 2016 presidential election.

“Thanks to all of her anti-gun-rights statements, Hillary Clinton will guarantee that gun owners will exercise their voting rights next November,” said CCRKBA Chairman Alan Gottlieb. “She seems eager to double down onBarack Obama’s failed attempts to stick pins in gun owners.”

Clinton, the former Secretary of State and U.S. Senator from New York, has a history of supporting gun control measures. She supports a ban on popular modern sport-utility rifles and original capacity magazines, and she suggested that gun owners are “a minority of people that hold a viewpoint that terrorizes a majority of people.”

“Just as it has been for the past seven years, since Barack Obama was elected in 2008, a Clinton nomination in 2016 will guarantee continued strong gun sales and expanded gun ownership,” Gottlieb contended. “Even among those who favor expanded background checks there is strong sentiment for protecting gun rights rather than controlling gun ownership.

“At the annual Gun Rights Policy Conference held over the weekend, one of the biggest concerns among the activists in attendance was a Clinton nomination, followed by a Clinton election victory,” he said. “American gun owners are convinced that she will turn the Oval Office into a nuclear war room against the Second Amendment.

“Between now and November 2016,” he continued, “we expect Hillary Clinton to try to stigmatize and marginalize gun owners, but in fact she will energize those millions of law-abiding citizens whose votes she fears the most. That’s why we’re grateful for her campaign rhetoric.

“By this time next year,” Gottlieb predicted, “if there is any apathy within the firearms community, it will have been transformed into activism.”

With more than 650,000 members and supporters nationwide, the Citizens Committee for the Right to Keep and Bear Arms (www.ccrkba.org) is one of the nation’s premier gun rights organizations. As a non-profit organization, the Citizens Committee is dedicated to preserving firearms freedoms through active lobbying of elected officials and facilitating grass-roots organization of gun rights activists in local communities throughout the United States. A new “study” by David Swedler, trained at the (gun control crusader Michael) Bloomberg School of Public Health, and co-authored by longtime anti-gun researcher David Hemenway, of the Harvard School of Public Health, uses rigged methodology to conclude that law enforcement officers are more likely to be murdered in states that have higher levels of gun ownership. As a result, Swedler and Hemenway say, “States could consider methods for reducing firearm ownership as a way to reduce occupational deaths of LEOs.”

In what may be the understatement of the century, Swedler and Hemenway concede that it’s “possible” that law enforcement officers are more likely to be murdered than other Americans because they have “more frequent encounters with motivated violent offenders.” To say the least. According to the FBI, from 2004 to 2013, 46 percent of officer murderers had prior arrests for crimes of violence, 63 percent had been convicted on prior criminal charges, 50 percent had received probation or parole for prior criminal charges, and 26 percent were under judicial supervision, including probation, parole, and conditional release, at the time of the officers’ murders.

On the other hand, Swedler and Hemenway say, law enforcement officers are able to defend themselves because they carry handguns, an argument that on its face endorses the carrying of handguns by private citizens, which is certainly not what the anti-gunners intended.

In painstaking academic detail, economist John Lott shows that Swedler and Hemenway skewed their study by comparing the number of law enforcement officers murdered with firearms in each state, to the percentage of suicides committed with firearms in each state, pretending that the latter accurately measures each state’s level of gun ownership. Additionally, the anti-gun researchers didn’t extend their comparisons over time to determine whether law enforcement officer murders increased or decreased in each state or did so in comparison to other states.

That, however, is not what you want to point out if you’re jockeying for a cut of the $10 million that President Obama has asked Congress (p. 8) to throw at so-called “gun violence research” or to continue to promote an anti-gun agenda. 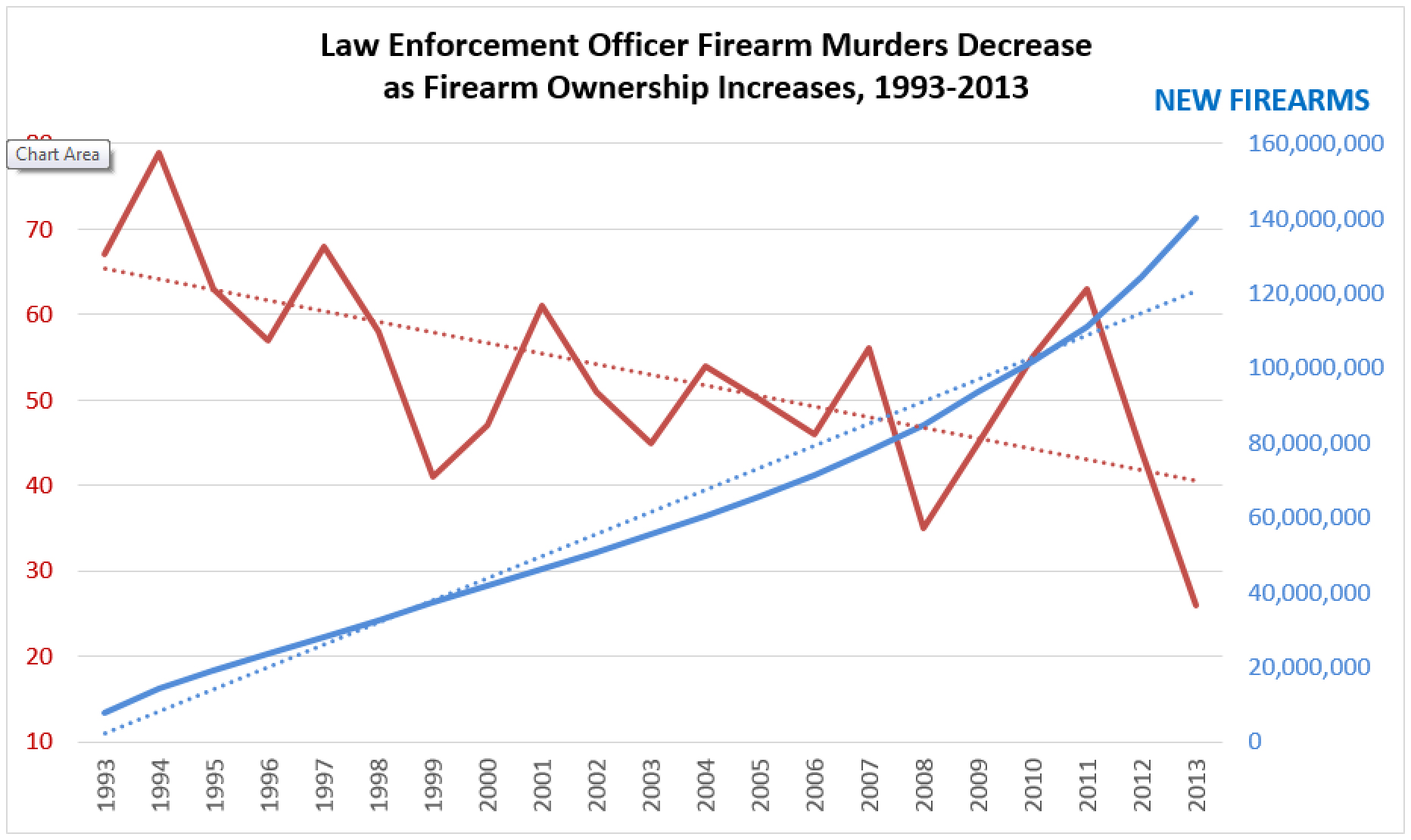 EDITORS NOTE: This column originally appeared on the NRA/ILA website. Florida has over one million citizens with concealed carry permits. This does not include the millions more who own a firearm in the state. Florida has come under scrutiny for its Stand Your Ground laws, which protect citizens who are protecting themselves. Gun rights are embedded in America’s history, a part of the Constitution and a right of law abiding citizens.

This infographic is from the National Shooting Sports Foundation says it all.

Explore more infographics like this one on the web’s largest information design community – Visually.

About the National Shooting Sports Foundation

The National Shooting Sports Foundation is the trade association for the firearms industry. Its mission is to promote, protect and preserve hunting and the shooting sports. Formed in 1961, NSSF has a membership of more than 8,000 manufacturers, distributors, firearms retailers, shooting ranges, sportsmen’s organizations and publishers.