I wanted to update you on our efforts with Verizon since you signed the petition, because we are hopeful for change! Below is a message from Lisa, our Director of Education and Outreach, who just got back from meeting with Verizon’s CEO and Chairman:

When I began working for the National Center on Sexual Exploitation last July, I never dreamed that one day I’d be sitting face-to-face with the CEO and Chairman of Verizon talking with him about the harms of pornography. But that is exactly what happened last week!

Now some backstory: as many of you know, Verizon has been on NCOSE’s annual Dirty Dozen List for the past three consecutive years due to its steadfast refusal to stop selling pornography via its Fios television network. While the company no longer offers explicitly child-themed films, on a daily basis it still serves up a nauseating menu of pornography that features themes of incest, racism, sexism, exploitation, and abuse. This is intolerable!

So, NCOSE adopted a new strategy. We bought Verizon stock so that we would be eligible to attend the company’s annual shareholder’s meeting on May 5th and so we could raise our concerns there. Thus, this country-girl from Kentucky, found herself sitting in a room with non-other than the CEO and Chairman of Verizon, Lowell McAdams, as well as Verizon board member and former CEO of Darden Restaurants, Clarence Otis, and Verizon’s Chief Counsel, Craig Silliman! Is that incredible or what?

I won’t get into all the nitty-gritty of what we discussed, but I will note that this was NCOSE’s first opportunity to directly raise our concerns with the individuals at Verizon in the best position to make change happen. What happens after this remains to be seen, but we know for certain that now Verizon knows there is a movement of people across this country who will no longer tolerate their sickening distribution of, and profiting from, sexploitation.

Our movement’s time has come. We wait expectantly to see if Verizon will choose to take progressive action, and join us on the right side of history.  In the meanwhile, if you’ve not done so already, please join us in sending a message to Verizon that sexploitation is not an acceptable business model for any company by signing our petition to Verizon.

We are on the verge of some incredible victories, but we need your help to get there! Please consider donating to ensure we are able to continue changing corporate policies, and culture. Act Now and Demand Access to the Best in Outdoor Television!

Verizon Fios has dropped Outdoor Channel and Sportsman Channel – television networks geared to tell compelling outdoor lifestyle stories and strong advocates for all areas of the shooting lifestyle. The networks are home to many of the NRA programs including Friend of the NRA, NRA All Access and Life of Duty.

By their actions, Verizon is marginalizing a segment of society – 130 million strong, loyal and passionate purveyors of the outdoor lifestyle including the millions of NRA members – because they don’t live, breath and work in the same space that we do. Their actions send a clear and dangerous message to our segment of society, as well as other segments of society that differ in the way they view life and live within those views.

The message is clear: If you differ in opinion about certain issues and lifestyle choices, Verizon doesn’t want your business. Would Verizon feel the same way if outdoor lifestyle and shooting enthusiasts decided to take similar actions against the company’s phone and internet services?

We’re calling on all NRA members to contact Verizon and DEMAND Verizon return Outdoor Channel and Sportsman Channel to their television line-up.  If you are a Verizon customer, you can also send a strong message to Verizon by choosing another provider of phone, internet, wireless or television service.

Go to www.KeepMyOutdoorTV.com or call 800-710-1922 to find out all the details and let your voice be heard.

Morality In Media (MIM) has released its 2014 Dirty Dozen LIst: 12 Leading Contributors to Sexual Exploitation. The top purveyors of pornography in America are:

ABOUT MORALITY IN MEDIA

Founded in 1962, Morality In Media (MIM) is the leading national organization opposing pornography and indecency through public education and the application of the law. MIM is a 501(c)(3) non-profit organization.

Currently, Morality In Media directs the War on Illegal Pornography coalition, an effort with Congress to pressure the U.S. Department of Justice to enforce existing federal obscenity laws.

MIM also maintains a research website about the harms of pornography and regularly directs national awareness campaigns to help the public understand the consequences of pornography and find resources to aid in their struggles. To see MIM other current efforts, click here. Mind control is the subject of George Orwell’s “Nineteen Eighty-Four“, which has regained popularity. Nineteen Eighty-Four is a dystopian novel published in 1949. The Oceanian province of Airstrip One (formerly known as Great Britain) is a world of perpetual war, omnipresent government surveillance, and public mind control, dictated by a political system euphemistically named English Socialism (Ingsoc) under the control of a privileged Inner Party elite that persecutes all individualism and independent thinking as thoughtcrimes.

Citizens globally are concerned about their governments spying on them. Others are concerned about media pushing an agenda rather than holding government accountable. Recent scandals like the NSA gathering data on hundreds of millions of US citizens and our allies is front page news. In many cases the NSA, FBI and CIA are accessing personal information which is stored by phone companies, web hosts and social media sites such as: Facebook, Twitter, Google, etc. Governments want this data and many of these same media giants will share it based on court orders or voluntarily.

So who controls the present?

Geo-Intelligence posted an infographic (below) to show who controls major print publications, media, Internet sites and entertainment outlets in the United States. These few “privileged Inner Party elite” can influence how you think about everything from the purchase of laundry detergent to your social and political behavior. What you read, hear and watch is controlled by about forty organizations. When they work in concert with government and freely share your information it can violate civil liberties according to the ACLU.

Take a quick look at this infographic, you will be surprised who is involved in “public mind control”. 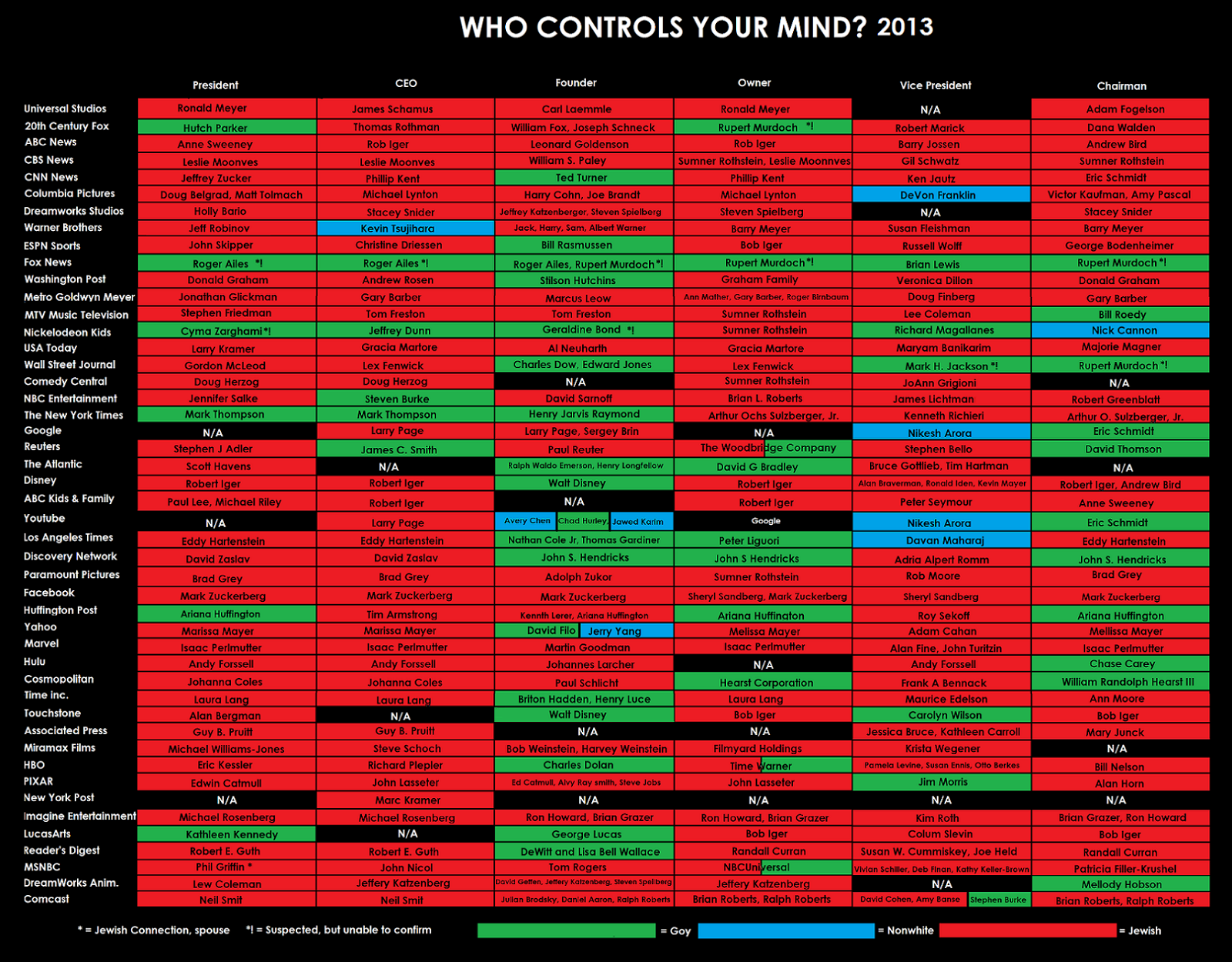 George Orwell wrote, “In the end the Party would announce that two and two made five, and you would have to believe it. It was inevitable that they should make that claim sooner or later: the logic of their position demanded it. Not merely the validity of experience, but the very existence of external reality was tacitly denied by their philosophy.”