This is timely, as Biden’s handlers appear to be once again aiding the Brotherhood, as Obama did during his first two terms as well.

A draft bill presented by several US Republican Senators to designate the Muslim Brotherhood as a terrorist organization sparked controversy, as many officials warn of its repercussions on Washington’s relations with several friendly and allied countries.

The bill urges the Department of State to use its statutory authority to designate the Muslim Brotherhood as a Foreign Terrorist Organization (FTO).

Cruz said that it’s time that “we join our allies in the Arab world in formally recognizing the Muslim Brotherhood for what they truly are—a terrorist organization.”

“I’m proud to reintroduce this bill to urge the Biden administration to designate them as such and advance our nation’s fight against terrorism.”

The Senator stressed that “we have a duty to hold the Muslim Brotherhood accountable for their role in financing and promoting terrorism across the Middle East.”

Earlier, Cruz criticized the Biden administration and Democratic senators from the House Committee on Appropriations for withholding $130 million worth of military aid to Egypt until Cairo released some Muslim Brotherhood political prisoners.

He also “blasted” President Biden’s nominee for Assistant Secretary of State for Near East Affairs, Barbara Leaf, slamming the Senate Democrats for trying to release “Muslim Brotherhood propagandist” who is “anti-semite and hate preacher.”

US and Egypt will launch the strategic dialogue on Monday with the two delegations led by Foreign Ministers Anthony Blinken and Sameh Shoukry in Washington.

However, Republican and Democratic lawmakers objected to such bills, saying that classifying the group as terrorists may not be helpful because it is no longer a unified organization.

They warn that such classification might harm the US relations with many friendly and allied countries, led by Turkey. They also note that some Muslim Brotherhood affiliates who are not classified as extremists are members of Arab governments and parliaments….

Click here to read more articles about the Muslim Brotherhood.

Islamic Republic of Iran: Couple sentenced to death for adultery This video was published by Senator Ted Cruz. In it shows how Alexandria-Ocasio Cortez would become the EPA Administrator in a Biden Cabinet. The following is the full rally by President Donald J. Trump in El Paso, Texas as recorded by the Fox News Channel on YouTube. NOTE: President Trump comes on stage at 45:23 into the video.

According to Fox News:

President Trump begins his 2020 campaign with his first rally of the year in El Paso, Texas. Trump is expected to reiterate his demand for a border wall as Democrat Beto O’Rourke leads a protest against it at the same time.

FOX News Channel (FNC) is a 24-hour all-encompassing news service dedicated to delivering breaking news as well as political and business news. The number one network in cable, FNC has been the most watched television news channel for more than 16 years and according to a Suffolk University/USA Today poll, is the most trusted television news source in the country. Owned by 21st Century Fox, FNC is available in more than 90 million homes and dominates the cable news landscape, routinely notching the top ten programs in the genre.

EDITORS NOTE: The featured video is by Fox News Channel on YouTube. The featured image by TheDigitalArtist on Pixabay. Written by Mario Apuzzo, Constitutional expert, defining Natural Born Citizen as the Founders meant. He concludes the only definition is:

A child born in a country to parents who were its citizens at the time of birth, both right of blood and right of soil merge into the child at the moment of birth to create a unity of citizenship and allegiance only to the United States and to no other nation.

Below are some excerpts from Apuzzo’s very recent writing on the subject:

With these principles to guide us, we can only conclude that de facto President Barack Obama, Senator Ted Cruz, Senator Marco Rubio, and Governor Bobby Jindal are all not natural born citizens. None of them were born in the United States to parents who were both U.S. citizens at the time of their children’s birth. Ted Cruz and I were both featured speakers at the Young America’s Foundation’s New England Freedom Conference in Nashua, New Hampshire this weekend, and the Leftists and Islamic supremacists were in an uproar: the Hamas-linked terror organization the Council on American-Islamic Relations (CAIR) demanded that Cruz withdraw from the event, and Mother Jones and Media Matters both published lengthy guilt-by-association pieces, wildly misstating and misrepresenting my views and trying to tar Cruz with positions that neither he nor I hold.

Cruz didn’t cave in to this pressure; both he and I spoke at the YAF event, and the media is still reeling from his refusal to submit to their dictates.The Hill said yesterday:

The speech was not without controversy — the Council on American-Islamic Relations (CAIR) asked him not to attend due to Robert Spencer’s appearance at the same event. Spencer is an author who has courted controversy over his criticism of Islam.

Cruz spoke at the Young America’s Foundation New England Freedom Dinner in Nashua. The Council on Islamic Relations asked Cruz not to appear because Robert Spencer, who co-founded an anti-Muslim group, was also appearing at the conference.

“Anti-Muslim group” — evidently the WaPo thinks it “anti-Muslim” to oppose jihad terror and the Sharia oppression of women, non-Muslims, gays, etc. That’s more revealing about them than about me.

This incident was yet another example of how the Hamas-linked Islamic supremacists of CAIR and their Useful Idiots in the Leftist media try, again and again and again, to bully and intimidate into silence not only anyone who speaks the truth about the jihad threat, but anyone remotely associated with them. With the Democrats already firmly in their camp, they’re trying now to secure the submission of the Republican Party.

It’s also an insight into the Left’s methodology: they smear, demonize and marginalize a target, and then use their own handiwork to do the same thing to someone else via guilt by association. Cruz deserves congratulations for standing firm.

Back in October 2005, Hillary Clinton and I spoke at the same event, and Hamas-linked CAIR was likewise furious. If these two wind up as the nominees, watch for this story to reappear regarding Cruz, but no one in the mainstream media will remember the Hillary one. Texas Senator Ted Cruz at a press conference standing with pastors against the actions by the City of Houston: www.standwithpastors.com. Time Magazine writes: Of course, Cruz is tattooed in poster form only. Some mischief-maker posted his photoshopped (we think!) image around town ahead of a speaking engagement for the congressmen at Beverly Hills’ Claremont Institute. The event was scheduled for Saturday night.

Likely a prank, the stunt prompted a tongue-and-cheek response from the Senator: 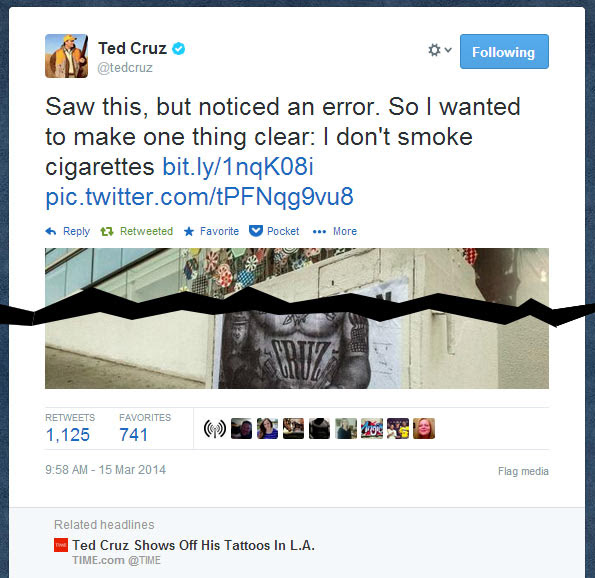 They think it’s prank? How much do we know about Ted Cruz, really? Could it be that this picture is actually a selfie texted from his phone to a mysterious Tea Party knockout, and his official bio is nothing more than a fictionalized alternative reality?

According to our sources, Ted Cruz is actually a twin brother of Chuck Norris, and his powers extend beyond the realm of what can be grasped by mere mortals.

We know for a fact that…

– Ted Cruz has a quadruple citizenship in the U.S., Canada, Middle-earth and Westeros.

– If you superimpose Ted Cruz’s fingerprints, the resulting image will be the Seal of the President of the United States.

– When Ted Cruz got bit by a rattle snake, the snake had to sign up for Obamacare but couldn’t get through the login screen and died after a week of pain and agony in front of the computer.

– Ted Cruz has already won the presidential election in 2016 with a roundhouse kick in the polls; the pollsters just haven’t developed the technology to look that far into the future. “Please join me, Senator Ted Cruz and others in calling for the appointment of an independent special prosecutor to investigate the IRS’s illegal targeting of conservative groups,” begins a letter sent to members of the US House of Representatives by Congressman Bill Posey (R- FL District 8).

The Posey letter notes, “This past spring, we learned that the IRS used inappropriate criteria to review Tea Party and other organizations applying for tax-exempt status based upon their names and policy positions. We further learned that IRS employees illegally released donor lists of other conservative organizations.”

“As of today, not a single employee has been indicted for this offense, and the Wall Street Journal reported that the FBI does not plan to file any criminal charges. Furthermore, Ms. Lerner has invoked her Fifth Amendment right against self-incrimination before the House Oversight and Government Reform Committee and refused to answer questions,” states Posey.

Americans are growing more concerned about a bureaucrat “culture of arrogance”. Time and again the President has failed to take action against those found to have violated their duties. It is AG Holder who is accountable to the People’s House and the people. President Obama during the interview with Bill O’Reilly stated there is not a “smidgen” of corruption at the IRS. Attorney Jay Sekulow, Chief Counsel for the American Center for Law and Justice, said in public testimony that the IRS scandal goes “as high as it gets.” When O’Reilly asked the President why he has not fired HHS Secretary Sebelius the President stated, “I promise you we hold people up and down the line accountable.” Apparently this does not apply to the IRS, either.

Posey concludes his letter with:

An independent special prosecutor must therefore be appointed to oversee the IRS investigation. Such a prosecutor must be given the independence to follow the facts wherever they may lead. He or she must both prosecute any and all criminal conduct and report to Congress and the American people what occurred, why it occurred, who knew about it, and what can be done to ensure it never happens again. Furthermore, this special prosecutor must be someone whose integrity is beyond reproach – and at a minimum, he or she must not be a major financial donor to either Democratic or Republican Party campaigns. The IRS, or any other agency, must not be used for political purposes.

I therefore ask that you join me in demanding that an independent special prosecutor be appointed to investigate the IRS’s illegal targeting of conservative groups.

To date the following members of the US House of Representatives have co-signed the Posey letter:

If your Congressman is not on the list you may want to ask him or her: Why?

To read the full text of the Posey letter click here.

EDITORS NOTE: Congressman Bill Posey represents Florida’s 8th Congressional District which encompasses all of Brevard and Indian River Counties, and a small portion of Orange County (Bithlo, Christmas and Wedgefield).  Posey, a Republican, was elected to U.S. House of Representatives in 2008 and is currently serving his third term.

RELATED VIDEO: In a hearing of the House Financial Services Committee on January 28, 2014, Congressman Posey questions Consumer Financial Protection Bureau Director Richard Cordray about the lengthy amount of time it takes for the CFPB to answer simple questions from Members of Congress.